"Stand and stir" no more: Food Network hosts are mastering the art of the short-form cooking tutorial 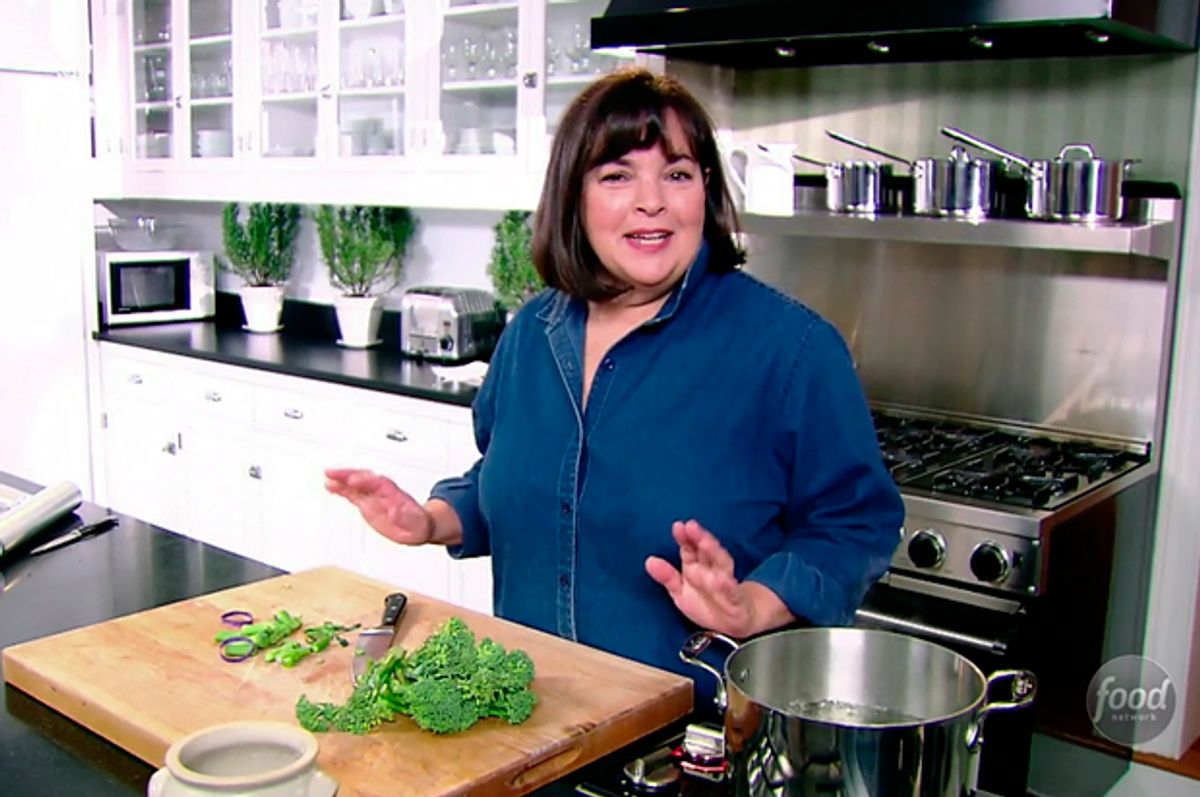 “So, here’s what you do with thyme. . . . ”  A soothing voice instructs from my mom’s laptop. On-screen, “Barefoot Contessa” host Ina Garten stands with a fresh sprig poised between her thumb and index finger.

“You take the stem, hold the end of it, and then run your fingers backwards along the stem — and the leaves just come off,” Garten explains, as the camera zooms in for a close shot on the pile of stubby green blades. She gives them a rough chop while assuring viewers that it doesn’t have to be perfect — although Queen Ina’s knife skills always are — before dropping the thyme into a bowl filled with a stick of butter and some lemon zest.

The angle widens and we see a pink, plump turkey on the counter. This is where my mom starts taking notes. We watch together as Ina slides the herbed compound butter under the skin, stuffs the turkey, roasts and plates it. All within four minutes.

This speedy tutorial, called “Ina’s Perfect Roast Turkey,” is just one of the many videos Food Network has posted on their website in the special “Thanksgiving” section. They range in host, but in length (most clock in around five minutes) they all stand in stark contrast to the typical 30-minute “stand and stir” shows that make up much of the network’s daytime programming.

Over the last several years, more and more food media companies have turned their eye toward an increased Internet presence in addition to their magazine subscriptions or cable ratings; we’re talking respected names in the culinary game like “Bon Appetit” and “Food and Wine,” too.

Simultaneously, more and more beginner home cooks are gaining basic kitchen knowledge from digital videos, a booming industry that will be worth $12.5 billion by 2017. You’ve probably seen these (seemingly ubiquitous) videos yourself. They are short, visually appealing and feature pretty simple recipes — dishes like “Bagel Boats” and “Jack-O-Lantern Stuffed Peppers.” They are also highly shareable.

Per an October article by AdWeek:

There’s something to be said for these videos that depart from the long form and instead present a “recipes on demand” model, but the model is largely hostless (all we see of the Tasty videos are the cook’s hands), often featuring a lot of prepackaged food, and they don't necessarily fit the aesthetic of many established food media outlets.

With Thanksgiving and winter holiday parties approaching, how are those outlets and their chefs tailoring their content for an increasingly digital audience? And what does this changing landscape look like for viewers?

I knew immediately the best person to talk with would be Justin Warner. You may remember Warner as a crowd favorite from “Food Network Star.” His quirky, science-based segments won the eighth season of the show and he produced a web series for the network, “Foodie Call.”

Warner is now the host of “Chefshock,” a live cooking web series hosted on Twitch, which is a live-streaming video platform most often associated with online gaming. Every single weeknight since Oct. 31, viewers have been able to stream Warner directly into their kitchen and cook a meal along with him, using ingredients posted before the episode.

Warner has navigated the worlds of traditional food television and digital media, and he has opinions on both.

“By cooking live, in my own home, with my own recipes, viewers are truly shown that everything is possible,” Warner said. “I drop food, pots boil over, and sometimes we make a dichromatic plate of very delicious food. What we are doing is making real food that real people can make, and we do it in a way that eases anxieties and promotes creativity.”

Warner says another benefit to live cooking is that viewers can ask him questions in real time. This is something other food media outlets have taken advantage of via platforms like Facebook Live. On Friday, I watched Bon Appetit's food director Carla Lalli Music make a grilled turkey breast in the magazine’s test kitchen, all on Facebook.

Along the way, viewers posted questions for Music to answer throughout the segment, like “Could you serve this with a horseradish cream sauce?” or “Can you leave the brine on too long?” Music answered in real time. The result was ultimately more informative than a 90-second Tasty video, and more personable than many of the scripted Food Network programs.

Like Tasty videos (and like Ina’s video from above), Music's tutorial walked viewers through a specific skill. The downside? Things got a little messy in the kitchen — something Warner addresses as one of the positives of a scripted, edited television show or web series.

“If something gets ‘rekt,’ in the parlance of Twitch, I have to think fast as to how to save the day, recover, or brush it off,” Warner explained. “It's also a very tough thing to organize. When you are live, you always want to be doing something.”

“There's no magic oven that has the already-made and hyper-styled food ready for its beauty shot," he added. "So that's really what's been the most difficult, tailoring the recipes (or) meals to fit an ‘always-on’ model.”

For that reason, there’s something really comforting about watching Ina in her carefully-controlled Hamptons kitchen, regardless of the format. There are always cut flowers on the table and freshly-picked herbs for her recipes within arm's reach, and those recipes always come out perfect.

“‘Stand and stir' is like a nice little xani bar laced with a hint of vicarious fulfillment,” Warner says. “The viewer escapes into a perfect world, and leaves with a sense of  ‘maybe I can do that, someday, when my life is as perfect.’”

Food media companies are realizing that viewers crave a little bit of everything in the digital food world. We want the scripted, edited videos hosted by food personalities we trust. We also want the live, “things might get a little messy” format we can watch via social platforms. Even the 90-second basic recipes fulfill a need. Thankfully, just like a good Thanksgiving meal, there’s enough for everyone to have a bite of each.