Thanksgiving, a day of mourning for Native Americans 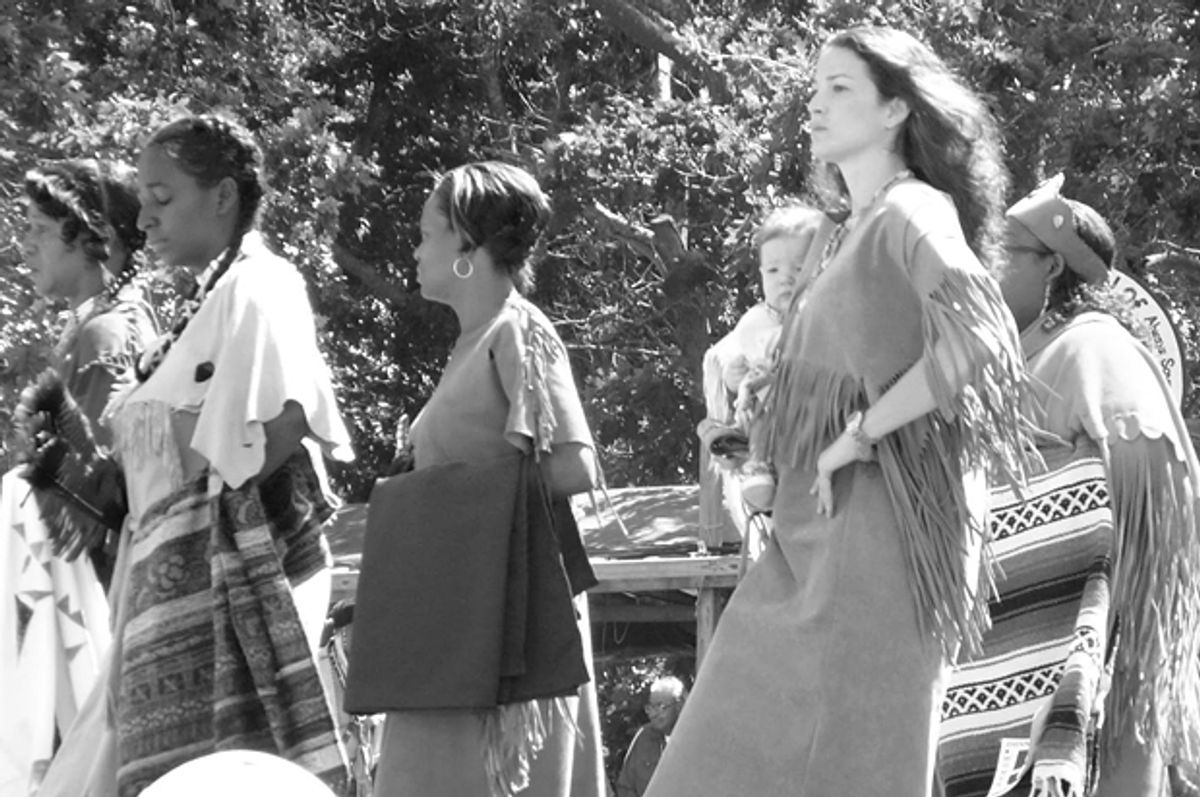 A photo of the author during the annual Shinnecock Indian Powwow.
--

Plagues, fires, taking from giving — these are the associations many of my relatives have with traditional American Thanksgiving, all the way back to our ancestors. This history of generosity and hospitality by the original people of these lands that were taken away and who were destroyed by illness is well articulated in Native American poet Allison Adelle Hedge Coke’s poem “America, I Sing Back.”

Oh, before America began to sing, I sung her to sleep,
held her cradleboard, wept her into day.
My song gave her creation, prepared her delivery,
held her severed cord beautifully beaded.

My song helped her stand, held her hand for first steps,
nourished her very being, fed her, placed her three sisters strong.

Coke illustrated the tenuous grasp the arriving settlers had on life and how the inhabitants of the “Americas” helped them to survive by guiding them and showing them the agricultural “three sisters” method of growing corn, beans and squash (still referred to in the "Farmer’s Almanac" today). For the subsequent hundreds of years, Indian people, and the wrongs done to our contributions and us, have been forsaken.

On Thanksgiving Day at noon, as they have for the past 46 years, Native Americans whose heritage lies in the band of Indians called Wampanoag will gather on Cole's Hill in Plymouth, Massachusetts, to commemorate a National Day of Mourning. The United American Indians of New England’s website, which requested organizing and food-serving volunteers for this year’s gathering, declares “We Are Not Vanishing. We Are Not Conquered. We Are As Strong As Ever.” It is a message that lives in the hearts and minds of indigenous people the world around: We are still here.

And while many of us are modernized and fully functioning people with a toe in two proverbial worlds — the Western one and the sovereign, Native one — there are many Native Americans who do not celebrate the Pilgrims’ arrival with a feast. Nor do they herald the transgressions against humanity done them by other European settlers.

In 1637 Massachusetts Gov. John Winthrop celebrated the first official "Day of Thanksgiving" to mark the homecoming of men from the English colony. Part of this grateful day that was left out of common knowledge? Six hundred Pequots were destroyed after laying down their weapons and accepting Christianity. This was nothing to be thankful for.

Well before that, the original Wampanoag feast was called Nikkomosachmiawene (or “Grand Sachem's Council Feast”). In 1621, the Wampanoag amassed the food to help the Pilgrims. This is what European settlers came to know as "Thanksgiving Day.”

If you grew up learning in school about the Pilgrims and the Indians being good, happy friends and have not yet read a retelling like Howard Zinn’s "A People’s History of the United States," you might not realize that for American Indians, Thanksgiving is a reminder of the genocide of millions of our people, the quashing of our culture and traditions and the stealing of our virgin lands.

Most Americans know something of the true history by now and perhaps not everyone cares. After all, there is a virtue in gathering with family and friends one day a year to eat a lot and share company, if you remove the historic significance.

Those who do care have been vocal about supporting the fight for clean water preservation at Standing Rock, North Dakota, an opposition by water protectors, Native Americas and non-Native people, that has waged on for seven months. Last Sunday night it grew still worse when 400 people were teargassed and sprayed with freezing water from powerful hoses.

And so descendants of the people of the Eastern shores will show up at Cole’s Hill on Thursday to honor their ancestors and in particular to acknowledge the current challenges Native people continue to face in this country. Poverty, alcoholism, drugs and the decimation of natural resources (which, as I’ve said in recent Salon interviews about the Dakota Access Pipeline, are a human problem, not an Indian issue alone) are paramount, and unyielding.

Said United American Indians of New England in a statement: “It is a day of remembrance and spiritual connection, as well as a protest of the racism and oppression which Native Americans continue to experience."

While most school children are still taught that Native Americans helped the Pilgrims and were invited to the first Thanksgiving feast, we can work to help them understand in an age-appropriate way that it wasn’t all roses. When your children put on an Indian or Pilgrim costume for their first Thanksgiving play, they often learn an incomplete, incorrect history.

Still, it can be damaging to share the realities of a genocidal story with young children. Instead, for each of the past two years, in coincidence with these school lessons and plays, I have donned my tribal regalia, as have my school-age children. I visit their classrooms and share elements of Native American culture, food and agriculture with curious minds, as my mother and elder relatives did for my elementary classes.

I answer questions about how Indians really lived, and in a careful way, explain that without the Indians, no arriving settlers — essentially city slickers— would have survived. In this way, I enforce a presence of gratitude, something all children can understand and benefit positively from.

In Native American Heritage Month, it seems a good time to recognize not only the legacy of Native people and how we continue to survive but also how our approach to treating our Earth is the only way civilization as a whole will remain. Looking down the snare of the “black snake," as Native people refer to oil transfer pipelines, there are lessons for everyone. As the stewards of the land, the water and the sky, Native Americans have great historical lessons to teach of kindness, of respect, of temperance. I would argue that these are lessons for all people on Thanksgiving Day.

“Oh, but here I am, here I am, here, I remain high on each and every peak, carefully rumbling her great underbelly, prepared to pour forth singing — and sing again I will, as I have always done,” Coke’s poem concludes. America "will make herself over. My song will make it so. . . . When she grows far past her self-considered purpose, I will sing her back, sing her back. I will sing. Oh, I will — I do. America, I sing back. Sing back what sung you in.”

And so it will be again, as it was.