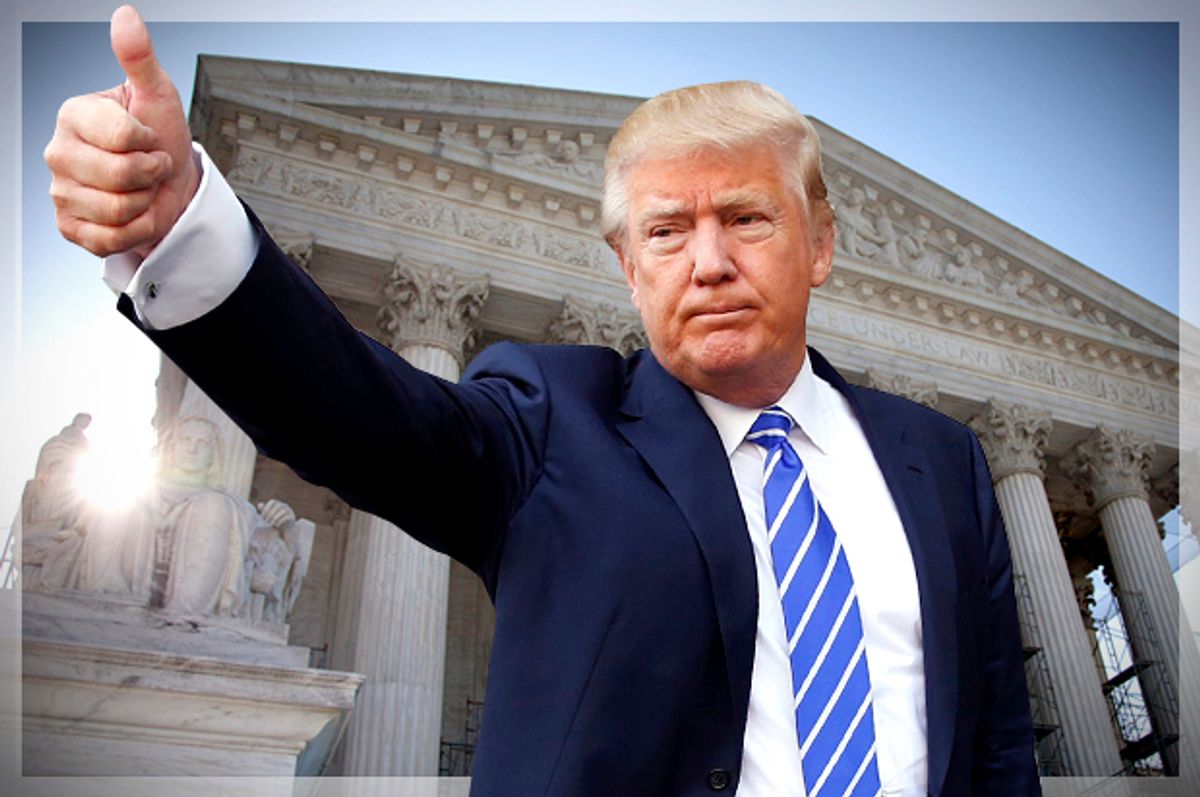 One of the most alarming aspects of the Roberts Court, at least when Justice Antonin Scalia was alive, was the way in which a 5-man conservative majority seemed ready, eager even, to dismantle decades of campaign finance law that restricted the amount of money that wealthy people and corporations could use to influence elections.

The most prominent was the 2010 decision Citizens United v FEC, which ended restrictions on corporations and other organizations from spending money on advertising to influence a campaign, so long as they didn't go directly through the campaign.

But there were others. Starting in 2007, the court under Chief Justice John Roberts began chipping away at restrictions on how much money corporations and wealthy individuals can spend on campaigns. The court also allowed the formation of what are now called "super PACs", groups that enjoy limitless fundraising to support candidates, and widely seen as a workaround for wealthy people to avoid contribution limits to actual candidates. Super PACs are not allowed to coordinate directly with campaigns themselves, but enforcing that rule has turned out to be a sticky proposition.

“Without campaign finance laws, it’s a wild west of politics, and regular voters and average Americans will have less say in who gets elected than the wealthy and the well-connected," David Donnelly, the president and CEO of Every Voice, explained over the phone. Every Voice, as its name would indicate, is a progressive organization dedicated to elevating the concerns of ordinary voters over big money interests, and fighting the influence of money on politics is a central part of their mission.

A major obstacle for this mission was the Supreme Court, which had a solid 5-4 majority in favor of tearing up all manner of limitations on campaign spending that helped level the playing field between moneyed interests and ordinary people. Then Scalia, who was in that conservative majority, died in March, which gave President Barack Obama a shot at replacing him on the bench. Obama and both Democratic primary candidates at the time, Hillary Clinton and Bernie Sanders, had been outspoken in their support of stronger campaign finance regulation, so it was widely expected that Obama's nominee would swing the court back towards upholding laws limiting campaign spending.

Unfortunately for the health of our democracy, Senate Majority Leader Mitch McConnell held up Obama's nominee, Merrick Garland, until after the election. Now it's widely believed that Donald Trump will be able to fill Scalia's seat with his own hand-picked nominee, and he's promised to nominate from a list of judges sculpted by the Federalist Society, a reactionary group that is hostile to attempts to limit the ability of wealthy people to drown out the voices of ordinary people in campaigns through heavy spending.

“Under nominations that are made by President-elect Trump and approved by a Senate led by Mitch McConnell," Donnelly explained, we're going to see court decisions that likely "put elections squarely in the hands of billionaires rather than all of us."

Donnelly feared that even campaign contribution limits, which prevent wealthy individuals from giving more than $2,700 to an individual candidate per election cycle, could be on the chopping block.

This might not seem like a big deal, in light of the recent presidential election. After all, Clinton spent twice what Trump did during the presidential election, and still lost. (Though she won the popular vote.)  Her campaign was widely considered a well-oiled machine, with 800 staff members and extensive ground game. Trump could barely be moved to hire the 130 people that he did.

But it's critical not to let the presidential campaign, which is unique in many ways, distort understanding of the role that money plays in politics.

“At the presidential level, it’s the most covered race in the country. It’s the one where both candidates in the major parties have a tremendous amount of exposure to the public through press, through their speeches, through online coverage," Donnelly said. “When you get down ballot, it does matter. It does matter when you have more money than your opponent and it does matter that you have enough money to get your message out.”

The hyper-focus on the presidential campaign can distract from the fact that Republicans have been gaining power over governorships, state legislatures, and Congress, but these gains represent nearly as much a threat to progressive politics as the Trump presidency does. And while there's many reasons for this shift, including gerrymandering and geographical shifts in the voting population, it's hard not to notice that the rise coincides with the ability of wealthy people to spend money more freely on elections.

“When you get to a House race or even some local races, the amount of money you get from outside sources can really make a big difference on the margins," Donnelly said.

To be clear, the Democrats have also gotten in on the game. In the New Hampshire, a whopping $90 million of outside spending was dumped on the Senate race, and most of it was in support of the Democrat Maggie Hassan. The reason, as Donnelly points out, is "that seat had the potential to turn the Senate from Republican to Democratic control."

But in aggregate, unchecked spending is bound to benefit Republicans more than Democrats, which is no doubt one reason Republicans generally support dismantling campaign finance regulation while Democrats want to strengthen it. The Republicans are, after all, the part of wealthy business interests, whereas the Democrats want to raise taxes on the rich and pass regulations that favor working people and the environment over industry profits. Democrats may target seats weakly held by Republicans for outsized spending, but overall, the Republicans have the finance advantage across the country.

This issue cuts deeper than these partisan concerns, however.

“Freedom of speech belongs to us, not just those of us who have a fat wallet," Donnelly said.

“What we need to do is get back to a system where regular people feel they can run for office," he added. Right now, people who don't have the ear of wealthy donors are effectively shut out of running, even for small offices like state legislator. And while he promised to "drain the swamp" of moneyed corruption in D.C., there's more reason to trust Trump's campaign vow to appoint judges that will continue chipping away at laws passed to level the playing field between the rich and the not-rich in our political system.