Your family's not dysfunctional enough? Here's something to cry about 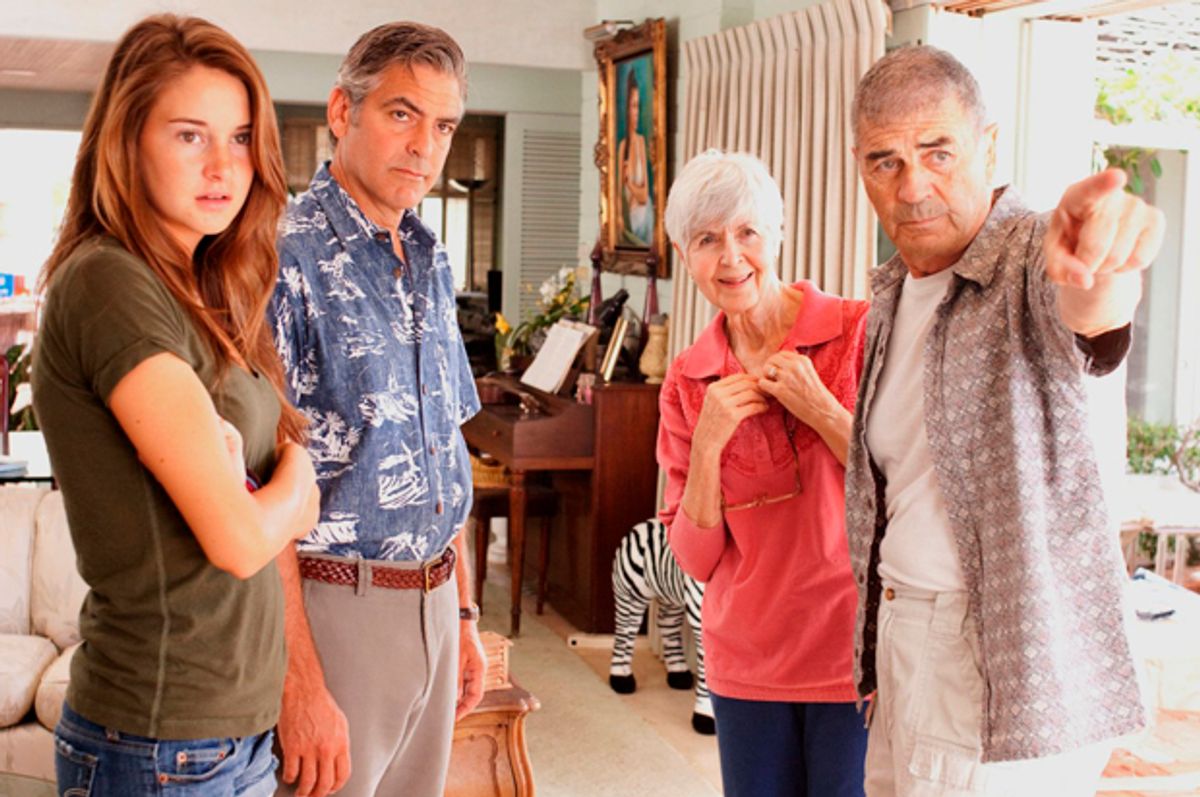 As Tolstoy observed, “All happy families are alike; each unhappy family is unhappy in its own way. Need to see examples of extreme family dysfunction to make your family look normal this holiday season? The ten plus dramas below embrace just how nasty family members can be to one another.

This doozy of a 60th birthday party for Helge (Henning Moritzen) is more an excoriation than a celebration as Helge’s oldest son Christian (Ulrich Thomsen) gives a “home truth speech” that describes what transpired between him, his late sister, and his father when they were younger. It is only one of several astonishing moments in writer/director Thomas Vinterberg’s blistering family drama. Shot in the Dogme style — which demands the use of handheld cameras and synch sound, among other “rules” — “The Celebration” makes every revelation shocking and every knocked over glass both discomfiting and freighted with meaning.

Lee Daniels’ punishing drama, based on the book, “Push” by Sapphire, recounts the traumatic existence of Claireece Jones (Gabourney Sidibe, in her Oscar-nominated debut). An overweight, illiterate teen, pregnant for the second time by her father, and verbally abused by her mother, Mary (Mo’Nique, in an Oscar-winning turn), Precious copes with her hardscrabble life by imagining fame and celebrity for herself. She may steal buckets of chicken to eat her feelings, but she finds a measure of self-worth in an alternative school and the guidance of a caring teacher (Paula Patton). Daniels’ hyperbolic style is thrilling during the film’s many over-the-top moments, but he also generates real emotion when Mary gives a Big Painful Confession to a social worker (Mariah Carey).

For more family dysfunction Daniels’ style, check out “Shadowboxer” which has Helen Mirren and Cuba Gooding, Jr. as mother/son assassins (and lovers!) who save an intended target and her baby.

What’s that expression? The family that slays together, stays together? This fantastic Aussie import, which inspired the recent TV series, has teenager Joshua, aka “J” (James Frecheville), moving in with his flinty grandmother Janine (Oscar-nominee Jackie Weaver) after his mother dies from an overdose. J was long kept away from Janine and her sons, Andrew (Ben Mendelsohn), Craig (Sullivan Stapleton), Darren (Luke Ford), and the “family business,” which involves drug dealing, armed robbery, and murder. Now reunited, J must navigate a world rougher than living with his addict mother. He is torn between family and the possible freedom a police officer can grant him by placing him in witness protection. Sure, “Animal Kingdom” is intense and violent, but its ferocity, as well as the indelible performances, make it soooo compelling.

Mike Leigh’s remarkable, Oscar-nominated film has an adopted middle-class black woman (Oscar nominee Marianne Jean-Baptiste) looking for her birth mother after the death of her adoptive mother. She unexpectedly finds out her birth mother is Cynthia (Brenda Blethyn, also Oscar-nominated), working-class white woman. The scene in which the two women make this discovery is — as in the best of Leigh’s films — both naturalistic, beautifully acted, and quietly powerful. “Secrets & Lies” also includes subplots that magnified the central theme from Cynthia’s fraught relationship with her other daughter, Roxanne (Claire Rushbrook), to Cynthia’s brother (Timothy Spall) and his wife (Phyllis Logan), who have their own marital troubles. Leigh’s film shows how we can’t choose our relatives but we can choose who we call family.

Sophia Coppola’s extraordinary adaptation of Jeffrey Eugenides’ celebrated novel concerns the five teenage Lisbon sisters who are kept sheltered by their overprotective parents (Kathleen Turner and James Woods). Unfolding as a haunting fable, the film recounts the deaths of each daughter, starting with the youngest, Cecila (Hanna Hall), who kills herself, prompting even stricter parental control for the surviving sisters. When 14 year-old Lux (Kirsten Dunst), falls in love with Trip (Josh Hartnett), it is the beginning of the end. “The Virgin Suicides” is full of heartbreaking moments, perhaps none more so than when one of the Lisbon sisters, dressed in what resembles a burlap sack, announces at the school dance, “This is the happiest night of my life.”

For siblings, it’s nice to know that as your parents age, you have someone to share the responsibilities of caring for your aging parents, right? But what if you both hate your abusive dad? When Lenny (Philip Bosco) is left alone and diagnosed with dementia, his angry adult children Wendy (Laura Linney, Oscar-nominated for her performance) and Jon (Philip Seymour Hoffman), must handle his caregiving duties. Ironically, in trying find a suitable nursing home, they are taking care of Lenny better than he ever took care of them. “The Savages” mines the grave situation for dark, knowing humor as sibling rivalry escalates between the emotional Wendy and Jon, and a particularly wrenching scene has Wendy trying to retrieve her father’s favorite pillow from a nursing home resident who stole it.

Alexander Payne’s wistful film, adapted from Kaul Hart Hemming’s novel, has Matt (a terrific, Oscar-nominated George Clooney) grappling with raising his two rebellious daughters, Scottie (Amara Miller) and Alex (Shailene Woodley, excellent) in Honolulu after an accident leaves his wife Elizabeth (Patricia Hastie) in a coma. Matt already has his hands full, trying to sort out a family trust involving island land that he has to sell, but he shifts his focus to his kids who are acting out. Their already broken family will be forever altered because their mother must be disconnected from life support. On top of all these pressures, Matt learns his wife was having an affair. “The Descendants” is distinguished by how it addresses right-to-die issues as well as grief, legacy, and forgiveness. But the best scenes are when characters, such as Elizabeth’s father (Robert Forster), lash out and get on each other’s nerves. That is what makes this film get under viewers’ skin.

A devastating documentary, “Capturing the Friedmans” started out as a film about birthday clowns, but when director Andrew Jarecki met David Friedman, he found a much more intriguing, and far more provocative story. David’s family shocked their community of Great Neck, Long Island in 1988 when Arnold, the father, and Jesse, the youngest (18 year-old) son, were both convicted of child pornography, sexual abuse, and pedophilia and sent to prison. David filmed his family growing up, and home movies show the family playing together as well as scenes of his parents arguing. Jarecki shrewdly uses these clips along with family interviews, testimonies by law enforcement officials, and even the Friedmans’ victims, to evaluate the case and what is (or perhaps is not) true. But what resonates is just how spectacularly this once tight-knit family splintered.

9. “What’s Eating Gilbert Grape” Johnny Depp plays the title character in this downbeat drama about a young man longing for his freedom. Since his father’s suicide, Gilbert has being tied down caring for his mentally disabled brother Arnie (Leonardo DiCaprio) and their morbidly obese mother (Darlene Cates). While he is having an affair with Betty (Mary Steenburgen), a married woman, he is soon drawn to Becky (Juliette Lewis) who arrives in town with her grandmother. Gilbert’s guilt regarding Arnie is as palpable as his wanting to be with Becky, and Depp portrays Gilbert’s malaise well. But “What’s Eating Gilbert Grape” is most notable for DiCaprio’s justly Oscar-nominated performance.

Double up with DiCaprio dysfunction! The young actor also distinguished himself in the unfairly neglected step-family drama “This Boy’s Life.”

One of the best films of the year was this little indie, dubbed “a New England folktale,” about a family torn asunder. William (Ralph Ineson) moves his wife, five kids, and their goat, Black Phillip, to a small farm after being thrown out of their community for being false Christians. Soon tensions mount within the family. The baby, Samuel, disappears; Thomasin (Anya Taylor-Joy), the oldest daughter, is (falsely) accused of being a witch; Caleb (Harvey Scrimshaw) the eldest son, is bedridden with illness and speaking in tongues; and the twins in the family are suspicious and acting suspiciously. What’s more, the family’s crops are starting to fail. Is all this trouble the result of Black Magic? “The Witch” shows the perils of conformity and betrayal, as well as how family members, who should stick together, can turn on one another — witness Thomasin’s physical fight with her mother, Katherine (Kate Dickie). But to quote Black Phillip, “Wouldst thou like to live deliciously?”