Donald Trump reawakened activism within pro sports — let's give thanks

After many years of apolitical focus on contracts and sneakers, this year's campaign woke up the sports world 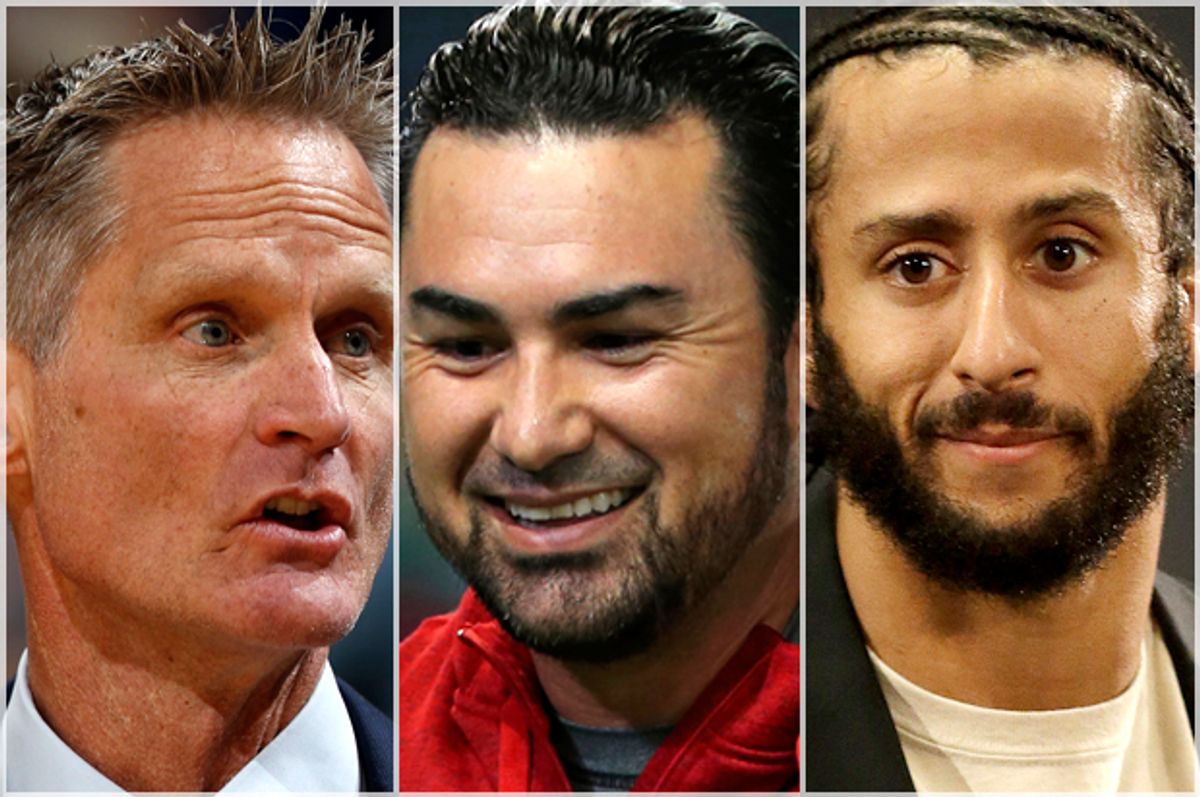 Facebook
Twitter
Reddit
Email
view in app
This Thanksgiving weekend — always one of the biggest times for collective sports spectatorship — I am thankful for professional sports. Though they haven't contributed much to society recently, besides enhancing sneaker collections and monopolizing a day of the week, pro sports may now be finding new meaning in an era of swastika graffiti and resurgent white nationalism.

Since Nov. 9, Donald J. Trump’s transition from Trump Tower to the Oval Office has been a whirlwind. While many are still grappling with the ascension to the American presidency of an unhinged Twitterphile with racist and authoritarian tendencies, the contours of Trump’s next four years are already manifesting themselves.

The bag of horrors that Trump carried throughout his campaign has now been fully opened. And its contents of tribalism, anti-Semitism, racism, Islamophobia, xenophobia and misogyny are surely coming to a street near you.

According to the Southern Poverty Law Center, there has been an unprecedented spate of hate crimes since Election Day, targeting all the groups that Trump attacked early and often during his campaign. Richard Cohen, president of the center, has said, “White supremacists are celebrating, and it’s their time, the way they see it.”

To restore America to greatness, Trump is assembling a group of odious men. Steve Bannon, Trump consigliere and godfather of the alt-right, responded to his appointment as White House chief strategist by saying, “Dick Cheney. Darth Vader. Satan. That’s power.”

Sen. Jeff Sessions, who has a well-documented history of racist conduct and voter-suppression tactics, has been tapped to protect the legal rights of all Americans as attorney general-designate. Retired general Michael Flynn, who views Islam as a “cancer” and a “political ideology” masquerading as a religious faith, is Trump’s choice for national security adviser.

Hate promises to be a prerequisite for all future nominees and appointees.

As Toni Morrison has noted, “So scary are the consequences of a collapse of white privilege that many Americans have flocked to a political platform that supports and translates violence against the defenseless as strength. These people are not so much angry as terrified, with the kind of terror that makes knees tremble.”

Professional sports leagues like the NBA and NFL do not exist in a vacuum. It is in the very milieu that Morrison has described that their athletes and coaches live, play and interact with the media and fans. And now, more so than at any point in recent memory, these individuals are beginning to acknowledge the scope of their responsibilities as not only public personalities but also as human beings who have a stake in this country.

There are a few iconic moments when sports have crossed paths with politics. This was captured in John Dominis’ image of a black power salute by Olympic sprinters Tommie Smith and John Carlos as they stood atop the medal podium at the 1968 Games in Mexico City. In the 1995 to 1995 NBA season, Mahmoud Abdul-Rauf, a Stephen Curry-esque talent, chose to sit during the rendition of the national anthem as it conflicted with his religious views. He said at the time, “You can’t be for God and for oppression.”

No story of an athlete’s principled defiance is complete, however, without mentioning Muhammad Ali, who was joined by Bill Russell, Jim Brown and Lew Alcindor (now Kareem Abdul-Jabbar) on June 4, 1967, at what is now known as the "Ali Summit." All four superstars united in strength to support Ali’s protest of the Vietnam War in and, as New York Times sports columnist Bill Rhoden noted, “the moment itself would be remembered as the first — and last — time that so many African-Americans at that level came together to support a controversial cause.”

This occurred at a time when concerns about one’s personal “brand,” endorsements and exorbitant contracts were subsidiary to conviction and the pursuit of truth. The absence of justice in their world gnawed at these men, compelling them to speak out despite risks that far exceeded the financial. It was courage personified.

Recently San Francisco 49ers quarterback Colin Kaepernick resurrected this spirit of protest in sports with his decision to sit during the rendition of the national anthem. Instead of deploying platitudes on Twitter or dampening his rhetoric to prolong his career, Kaepernick chose to address police brutality and racial injustice on the field and in interviews with the media. He spurred a much-needed conversation and successfully made America uncomfortable again about the inequities that our racial, religious and class-based enclaves allow us to ignore.

The election of Donald Trump and everything it represents appear to be stirring a similar activism in players and coaches. Mike Evans of the Tampa Bay Buccaneers is now sitting during the rendition of the pre-game anthem in light of Trump’s victory. To explain his decision, he simply said, “America’s not right.”

Adrian Gonzalez of the Los Angeles Dodgers, who grew up on both sides of the U.S.-Mexico border, chose not to stay in the Trump International Hotel & Tower when his team was visiting Chicago to play the Cubs during the National League playoffs. He said, “I just have my own values and morals that I want to live by.” Similarly, at least three NBA teams, the Milwaukee Bucks, Memphis Grizzlies and Dallas Mavericks, have stopped staying at hotels that bear Trump’s name.

Three prominent NBA coaches, Steve Kerr of the Golden State Warriors, Gregg Popovich of the San Antonio Spurs and Stan Van Gundy of the Detroit Pistons, have issued impassioned and vociferous denunciations of Trump. In the aftermath of Election Day, Popovich said, “It leaves me to wonder where I've been living and with whom I'm living.”
He added, "I'm a rich,white guy. And I'm sick to my stomach thinking about it. I couldn't imagine being a Muslim right now or a woman or an African-American, a Hispanic, a handicapped person, and how disenfranchised they might feel. And for anyone in those groups that voted for him, it's just beyond my comprehension how they ignored all that.”

In a tweet on Nov. 9, Sports Illustrated’s Lee Jenkins noted that there is now speculation that no NBA team may visit the White House “for a while” after Trump’s victory.

According to Michael Eric Dyson, these individuals who have spoken out are animated by patriotism, which unlike blind nationalism, “is a bigger [and] more uplifting virtue. Patriotism is the belief in the best values of one’s country, and the pursuit of the best means to realize those values. If the nation strays, then it must be corrected. The patriot is the person who, spotting the need for change, says so clearly and loudly, without hate or rancor.”

Increasingly, sports no longer appear to be an apolitical refuge for fans in a country that is currently witnessing talks of Muslim internment camps, holding discussions on CNN about whether Jews are people and circulating videos of an alt-right conference where neo-Nazi sympathies were openly expressed. Sports will no longer serve as an insulation that will prevent us from the storm brewing outside the fantasy world of our big-screen TVs and billion-dollar stadiums. All efforts are now needed to ensure that Trump’s presidency is plainly seen as the frightening threat that it is.

This Thanksgiving I’m thankful that people like Popovich, Gonzalez and Kaepernick, who could easily have looked the other way, have answered the call.