"Gilmore Girls: A Year in the Life": Too much of a good thing can be wonderful. Or just too much.

Netflix's "Gilmore Girls" can be downright overwhelming. It's also a generous gift of escapism for devoted fans. 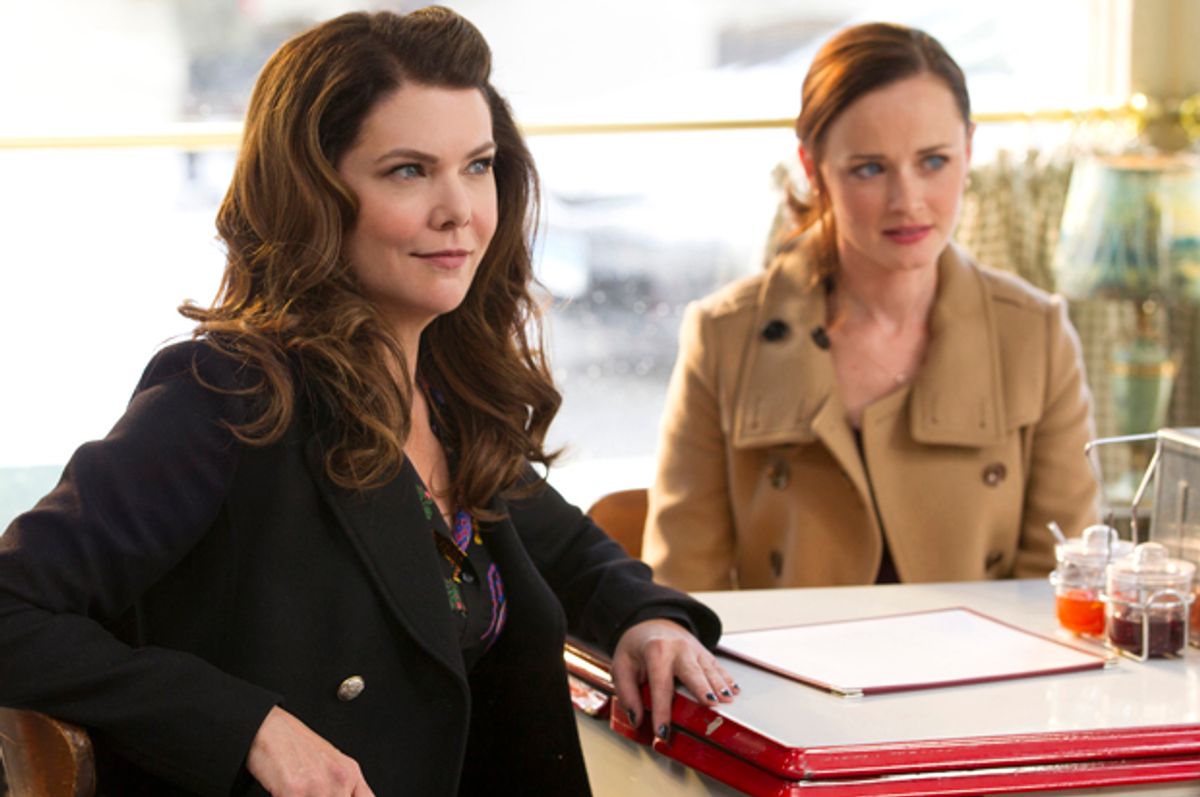 Going home again evokes a sense of consolation as much as dread, especially at this time of the year — especially right now. What with the travel rush, the frantic meal preparations, the donning of the gay apparel and psychic armor, can you blame a person for wanting to escape to Stars Hollow after the turkey's gone cold?

Give thanks to Netflix, then for granting temporary asylum to anxious Lorelai and Rory fans in the form of "Gilmore Girls: A Year in the Life." All they must do is fight through that Thanksgiving tryptophan haze until 12 a.m. Friday, when all four 90-minute episodes become available, returning one of television's best-loved mother-daughter duos to the business of charming viewers into submission.

That it does from the opening moments of the first episode. Perched inside a pergola in the center of a snow-covered park, Lorelai (Lauren Graham) sniffs the air blissfully and smiles as the passersby. Never mind that this is sunny California masquerading as wintry Connecticut. It's a vision of Christmas card perfection, right down to singer-songwriter Sam Phillips' la-la-las flitting through air that's supposed to be frigid.

Then Rory (Alexis Bledel) sneaks up behind Lorelai, and the signature "Gilmore Girls" verbal calisthenics commence. Fans live for the crackling dialogue sprints concocted by the show's creators Amy Sherman-Palladino and Dan Palladino; those viewers need no explanation as to what they are like to experience. The rest of us unsophisticated heathens (including yours truly) can gain a sense of it by imagining eavesdropping on a conversation that breaks down like this:

"Pithy observation occasionally stated in the form of a question?"

The first of many rapid-fire call and responses like these is presented in this opening scene with the tenderness of considerate foreplay. Before two minutes and 15 seconds have elapsed, Rory and Lorelai have already engaged in a mighty riff that zips by references to Gwyneth Paltrow's insipid online lifestyle magazine Goop, "Zoolander 2," and "Les Miserables."

Then Rory pauses for a resetting inhale. "Wow — winded!" she says.

Lorelai happily smiles. "Haven't done that in a while."

Rory grins. "Felt good," she admits. And they're off to get coffee.

"Gilmore Girls: A Year in the Life" fills its cup with adorably frenetic energy and stays full to the brim through its four episodes, bounding through its reunion with a relentless rat-a-tat-tat of dialogue that refuses to let up. Those who subscribe to the notion that too much of a good thing can be wonderful should be amply satisfied by this stuffed-to-the-gills revival, what with all of its faux musical departures, jewel-toned theatricality, cameos built in to please the faithful and episodes built around the four seasons — starting, naturally, with a magical winter.

Netflix made journalists agree to keep elements of "Gilmore Girls: A Year in the Life" a secret and not to reveal its best cameos — that is, the ones that haven't been blown in the coverage leading up to Friday's premiere — and that will be honored here. Suffice it to say that unless an actor in question has passed away, the old gang is pretty much all here — mostly. Regarding Sookie, just keep in mind that Melissa McCarthy's schedule has become substantially busier since her days as a "Gilmore Girls" series regular.

Otherwise, take comfort in knowing that the town is impressively intact and that some aspects of the local color, including weirdo Kirk Gleason (Sean Gunn), are as loopy as ever. Elsewhere, Lorelai has realized her dream of running the Dragonfly Inn, which means there's still a platform for the acerbic, hyperbolically French Michel Gerard (Yanic Truesdale) to hold court and judge others.

Stars Hollow is back, babies. And unless you've built up a tolerance for whimsy peddled with the subtlety of a jackhammer doing a buzz roll on a gigantic snare drum, your visit may become just short of unbearable about 45 minutes into the first installment of "A Year in the Life."

That one, like the others, clocks in at about 90 minutes.

Granted, a lot of viewers have been aching to reconnect with Lorelai and Rory and Luke (Scott Patterson) and even stodgy blue-blooded matriarch Emily Gilmore (Kelly Bishop). These stalwarts may firmly believe they're primed to binge these feature-length chapters in a single pass.

My advice? Slow your roll. "A Year in the Life" is most effective when absorbed in doses, if only to allow room for the story to breathe between the seasons.

Freeing Sherman-Palladino and Palladino to write more dialogue and longer scenes doesn't necessarily improve the show's execution. Some of those verbal sparring matches run on about 15 beats too long. Scenarios that could have been sweet in smaller doses take on an unattractive bloat, especially those related to Rory. The collective effect is akin to the feeling of eating one too many slices of pie on top of a third helping of dinner.

The show's cheeky, intellectually affirming nature remains intact nevertheless, even if its musical references evoke more nostalgic feels than hat tips at its once-prominent subversiveness.  Then, and now, "Gilmore Girls" has been at its finest when it celebrates its idealized mother-daughter bond while speaking to the more universal experience that such relationships aren't always simple or even pleasant.

Sherman-Palladino and Palladino never shied away from spotlighting the flaws in their characters, all of whom could be selfish and downright unlikable, sometimes making incredibly stupid decisions. They're human, in other words, even if their lightning-quick repartee is anything but natural.

Although it still feels like the same old Stars Hollow, a lot has changed in the 16 years since "Gilmore Girls" first debuted. Rory is 32 now and still finding her way in life, as is Lorelai. But the younger Gilmore has launched into the world and spends more time on planes to London and New York than in her bucolic hometown.

Given the fact that she's a freelancer, one has to wonder how she can afford these regular jaunts to expensive cities. But why not spoil the fantasy now? The larger point here is that Lorelai and Rory are now closer to being bosom friends than mother and daughter, which transforms an element of the show's winning chemistry. But their fuzzy warmth also augments a new level of chill in Emily and Lorelai's fractious relationship that sharpens the grief framing these new episodes.

This is because "A Year in the Life" drops us in on the Gilmores a mere four months after Richard Gilmore's death. The actor who played him, Edward Herrmann, died after battling cancer two years ago, and his loss is simply not something a heart-forward series like this could or would downplay.  The family's mourning is still fresh enough that we find Emily still searching for a new mooring as Lorelai processes her conflicted feelings about her difficult relationship with her father. Such pain adds a level of honesty to this otherwise unreal little world.

While "Gilmore Girls" may exist in some fantasy version of America, it's hard to ignore how blindingly white the show is, and we're not just talking about the snow drifts. The show is the product of a less diverse time at a homogenous network; this is true. As enjoyably bitchy as Truesdale makes Michel, however, it's still strange to see that he and Lane Kim (Keiko Agena) are the only minorities who get any meaningful development in the series. That is, unless you count Lane's stereotypically domineering mother and Emily Gilmore's new Peruvian maid Berta, who speaks a Spanish-derived patois that nobody can comprehend. Delightful!

Connecticut is still overwhelmingly Caucasian, it's true. But it would have been nice to see Sherman-Palladino and her husband evolve these personalities into something more than cartoonish satellites for the three principals.

"Gilmore Girls: A Year in the Life" also arrives in the midst of a full-blown revival and reboot trend on television, as TV executives comb through past titles in a quest to capitalize on our cultural fascination with looking backward.

"Heroes," "24" and "Full House" — all of these shows received the resurrection treatment to mixed reviews. Yet to come are revivals of "Prison Break," "Twin Peaks" and yet another attempt to put defibrillator paddles to the chest of "24," this time sans Kiefer Sutherland. In our era of too many viewing options, banking on the TV title's redux can sound like a safe idea. But they rarely pan out because — take heed, ye NBC executives pondering that "Will & Grace" reunion tour! — their potency was in their connection to the marrow-deep truths of a particular time, whether in a viewer's life or a specific era.

The years and the audience keep moving along after a favorite dramas end. And time's passage doesn't easily lend itself to a TV show's seamless transition from its original guise into the present.

But "Gilmore Girls" always treated the concept of time lightly, and its creators continue to do so in "A Year in the Life." That quality, as well as the fact that its younger fans may have more in common with its older viewers now, could help the show to age somewhat more gracefully than other returned series.

Another important difference is that "Gilmore Girls: A Year in the Life" actually has a reason to exist: The final season, completed without input from the show's creators, was a travesty. Following a contract dispute, Sherman-Palladino and her husband left "Gilmore Girls" in 2006, shortly after The WB merged with UPN to form The CW. The series went out in 2007 as a paler version of its former self, and even a casual viewer could notice the absence of the couple's signature spark. The best compliment a person can pay the ending is to say it was serviceable.

"Gilmore Girls: A Year in the Life" allows Sherman-Palladino and Palladino to at last take the story and its characters to their originally intended destinations, concluding the series in the way they had long planned, with four words that have remained a secret until now.

Without Netflix, "Gilmore" fans may never have gotten to see and hear those words in context. Just remember, there's no rush to get to them. They'll be waiting for you, following hours of pithy chatter with beloved friends and a few self-referential moments that somehow manage to refrain from being overly indulgent. In a series that indulges in a great deal, that's saying something.