Honoring the folks who made this whole Thanksgiving thing possible: The 10 best Native American movies 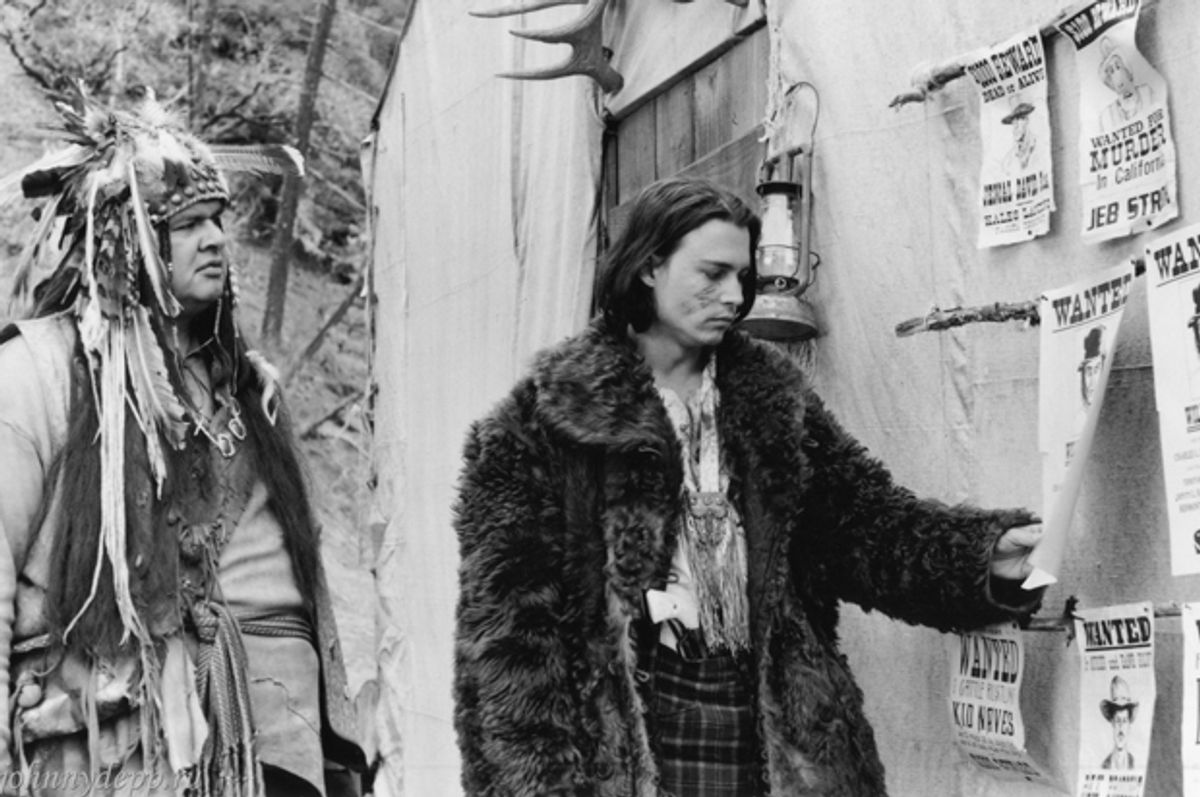 There are too few films about Native Americans, so we should be thankful for the great ones we have. Sherman Alexie, the brilliant writer, has certainly been responsible for several films on this list, but in my interview with him two years ago for Salon, he talked about his work as a script doctor, acknowledging, “It’s funny they would hire an Indian to make white people more likable!”

In these contemporary films by and about Native Americans, the white people are often shown to be greedy, stupid or privileged (or all three), emphasizing the moral superiority of the indigenous people. Here are 10 notable films that showcase Native Americans.

Hey, Victor! Adapted from Sherman Alexie’s “The Lone Ranger and Tonto Fistfight in Heaven,” the promoted as the “first all-Indian” film has Coeur d’Alene Indians Thomas Builds-the-Fire (Evan Adams) and Victor Joseph (Adam Beach) leaving the rez and taking a road trip to collect the ashes of Victor’s late (and estranged) father (Gary Farmer). In a comic moment, they are asked if they have their passports “because it’s a whole different country, those United States!”

The young men are complete opposites. Thomas is wiry and chatty where Victor is broader, more stoic. They get along like oil and water, which provides some of the film’s humor, as when Victor suggests Thomas learned what he knows about Indians from “Dances with Wolves.” But “Smoke Signals” boasts a poignant, poetic screenplay that also considers issues of fathers and sons, resentment and forgiveness as when Thomas asks and answers, “How do we forgive our fathers? Maybe in a dream.” Director Chris Eyre’s beautiful, heartbreaking film may be an all-Indian production, but it speaks some universal truths.

Made almost a decade before “Smoke Signals,” the lesser-known “Powwow Highway” is also a road movie. Cheyenne Indians Buddy (A Martinez) and Filbert (Gary Farmer) drive across the badlands to rescue Buddy’s sister in Santa Fe, New Mexico. She has been framed for a crime she didn’t commit.

The trip may have come about as part of a scheme to keep Buddy from stopping a crooked land deal in Montana. Buddy Red Bow (Martinez), a quick-tempered activist, is battling greedy developers. The men’s journey is funny and spiritual — they visit various sacred places along the way — and the film also addresses issues of how Indians are (mis)treated by white men. The best scene has Filbert at a motel desk where a TV is on the fritz. While Filbert is able to fix the set’s reception, he leaves it broken because of how poorly he has been treated by the white staff.

Sherman Alexie’s directorial debut was this underappreciated 2002 feature based on his titular book of stories and poems. He described the film as, “a weird, experimental film about a gay Native American poet.” “Fancydancing” is a captivating mélange of poetry, music, dance, interviews, text and video. Seymour Polatkin (Evan Adams, from “Smoke Signals”) is a gay poet who recites (Alexie’s) verse: “In the Great American Indian novel, when it is finally written, all of the white people will be Indians and all of the Indians will be ghosts.”

Seymour returns home to the reservation after the death of his friend Mouse (Swil Kanim). Going home means he will reunite with his former best friend, Aristotle (Gene Tagaban), who is resentful of Seymour and his success. Seymour has concerns about returning to the rez because of his fame in the white world, but he also has trouble assimilating with whites because he is Indian.

The conflict for Seymour arises in his serving as a voice for his people — individuals he feels he may not adequately represent. The whites see Seymour as the voice of Native Americans, but Seymour feels he only represents himself, not his tribal brothers and sisters. (Among the film’s most pointed episodes is one where Seymour is interviewed by a brusque talk show host (Rebecca Carroll) who forces him to confront who he is. “The Business of Fancydancing” is a challenging but worthwhile film. Still, Alexie demured, “I think there are five or six great scenes in it. That almost redeems it — but I’m self-critical.”

Co-written and co-directed by twins Alex and Andrew J. Smith, this assured adaptation of James Welch’s celebrated novel by the same name (“The bible of Native American literature” according to Alexie) concerns Virgil First Raise (Chaske Spencer) who wakes up in a ditch and tries to make sense of his life. He has to deal with an ex-wife who left him and stole his gun, as well as grapple with his feelings for family members who are living, dying or dead.

Filmed on Montana’s Hi-Line and featuring gorgeous big sky vistas, the film is notable for giving its Native American characters a love scene (a screen rarity!). Anchored with terrific supporting turns by Gary Farmer as Lame Bull, Virgil’s stepfather, and David Morse as a gonzo con man named the Airplane Man, “Winter in the Blood” is a gem, and it received Sherman Alexie's Indian Artist Seal of Approval.

Jim Jarmusch’s revisionist Western, shot in luminous black and white (and featuring a remarkable Neil Young score), stars Johnny Depp as William Blake, an accountant in 19-century Cleveland who travels to the West for a job that doesn’t pan out. The film’s real hero is not the white man Blake, but Nobody (Gary Farmer), a Native American encountered by Blake, someone who has been exiled from his own people.

Nobody transforms Blake — weaponizing the white man and turning him into a killer of white men. “Dead Man,” which is about American Indian empowerment as well as the perils of capitalism, industrialization and genocide, was also praised for not subtitling the multiple Native American languages and thus obfuscating some of the tribal humor for those who don't know the dialects.

This delirious thriller about soldiers in a remote fort in the Sierra Nevadas pivots on the Algonquian legend of the Wendigo. George (Joseph Running Fox), one of the two Indians at the outpost, recounts the legend, which Col. Hart (Jeffrey Jones) translates. “It’s an old Indian myth from the North. A man eats another man’s flesh, usually an enemy’s, and he steals his strength . . . essence . . . spirit. And his hunger becomes craven, insatiable. The more he eats, the more he wants, and the stronger he becomes.”

The Wendigo arrives in the form of Colquhoun otherwise known as Col. Ives (Robert Carlyle), a white Scottish man who appears one day and disrupts the activity of the men. The violence that results is gory and darkly funny. In the film’s most quotable line, Pvt. Toffler (Jeremy Davies) exclaims, “He was licking me!” The moral of the story: Don’t mess with Indian legends!

Kevin Costner’s Oscar-winning epic is a classic white savior film and a marvelous negative case study. Here, Lt. John Dunbar (Costner) finds himself when he becomes immersed in the unfamiliar environment of the Sioux culture. After unintended heroism on the battlefield, Dunbar is sent to a deserted post where he slowly integrates himself and gains the trust of the local Sioux tribe. Stands With a Fist (Mary McDonnel), a white woman, who was captured and raised by the tribe, helps translate for him.

When they fall in love, tribal law forbids their relationship (Stands With a Fist is a recent widow) but in what could be seen as a subversion of Native American ways by the white man, they eventually secure the blessing the tribe’s medicine man, Kicking Bird (Graham Greene) and marry. Dunbar does become an honorary (and later full) member of the tribe, and the film shows how he learns that his original values are wrong; that the indigenous Native American culture is morally superior.

The film unsubtly plays up all the white characters as barbarians. Costner, the director, tries too hard, taking pains to showcase Native American rituals (cue the stirring buffalo hunt sequence) but they just end up emphasizing stereotypes or simply narrative contrivances.

This ambitious Hollywood thriller, directed by Michael Apted, has “one-quarter Indian” FBI agent Ray Levoi (Val Kilmer) teaming up with tribal policeman Walter Crow Horse (Graham Greene) to solve a murder on a Sioux reservation. Of course, Ray will come to appreciate the heritage he has denied over the course of the film. But “Thunderheart” wisely allows the interracial collaboration to make its points about following one’s heart rather than one’s head.

The film raises awareness for the poverty-like conditions on the reservation and gets a dig in about government meddling on Native American property with a subplot involving a conspiracy to strip mine uranium. (The film is loosely based on a 1973 case). “Thunderheart” also celebrates Native American traditions like a powwow or a sweat lodge ceremony. Some folks were critical, however, of the Indian “magic” (such as shape-shifting myths) in the film. “Thunderheart” may be a mixed bag, but it is not uninteresting.

Michael Apted tackled the case that forms the basis for the homicide in “Thunderheart” head on in his powerful 1992 documentary, “Incident at Oglala.” The film, narrated by Robert Redford, is a call to action for clearing the wrongly convicted Leonard Peltier who was convicted and sentenced to two consecutive terms of life imprisonment for killing two FBI agents during a raid on the Pine Ridge reservation in South Dakota on June 26, 1975.

Three other man charged with the crime were tried and acquitted. The film asserts that Peltier, who was extradited from Canada to be tried, was framed because he was an activist. (The film recounts the history of the 1973 demonstrations at Wounded Knee by the American Indian Movement that caused tensions.) The evidence linking Peltier to the crime is often conflicting or unconvincing, and there are witnesses who recant their testimony or claim Peltier is innocent. Peltier even says he knows who the killer is but isn’t telling. (While his clemency petitions have been denied, Peltier, who is now in his 70s, would next be eligible for parole in 2024, according to some estimates.)

The 121-year-old Jack Crabb (Dustin Hoffman) tells his life story in this classic 1970 film, based on the novel by Thomas Berger. Rescued by the Cheyenne and then saving a Native American boy, he is named “Little Big Man” for being “brave . . . little in body, but his heart is big.” The young Jack Crabb eventually moves back and forth between white and Native American cultures.

He meets many of the white heroes of the Old West, from Wild Bill Hickok (Jeff Corey) to George Armstrong Custer (Richard Mulligan), before he returns to live with the Cheyenne. Through twists of fate, he becomes the only white survivor of the Battle of Little Bighorn. As the film’s tagline reads, Little Big Man is “either the most neglected hero in history, or a liar of insane proportion!”

Whether the narrator is unreliable, this “tall tale” does truthfully present Custer and the Indians. And while deemed a satire, the film has long been seen as a parallel for the Vietnam War and American imperialism.