Peak "crony capitalism": Donald Trump indulging in corrupt favoritism isn't surprising — but so much of it so soon?!

After running on claims he'd fix a corrupt system, Trump is setting up an economy that enriches his associates 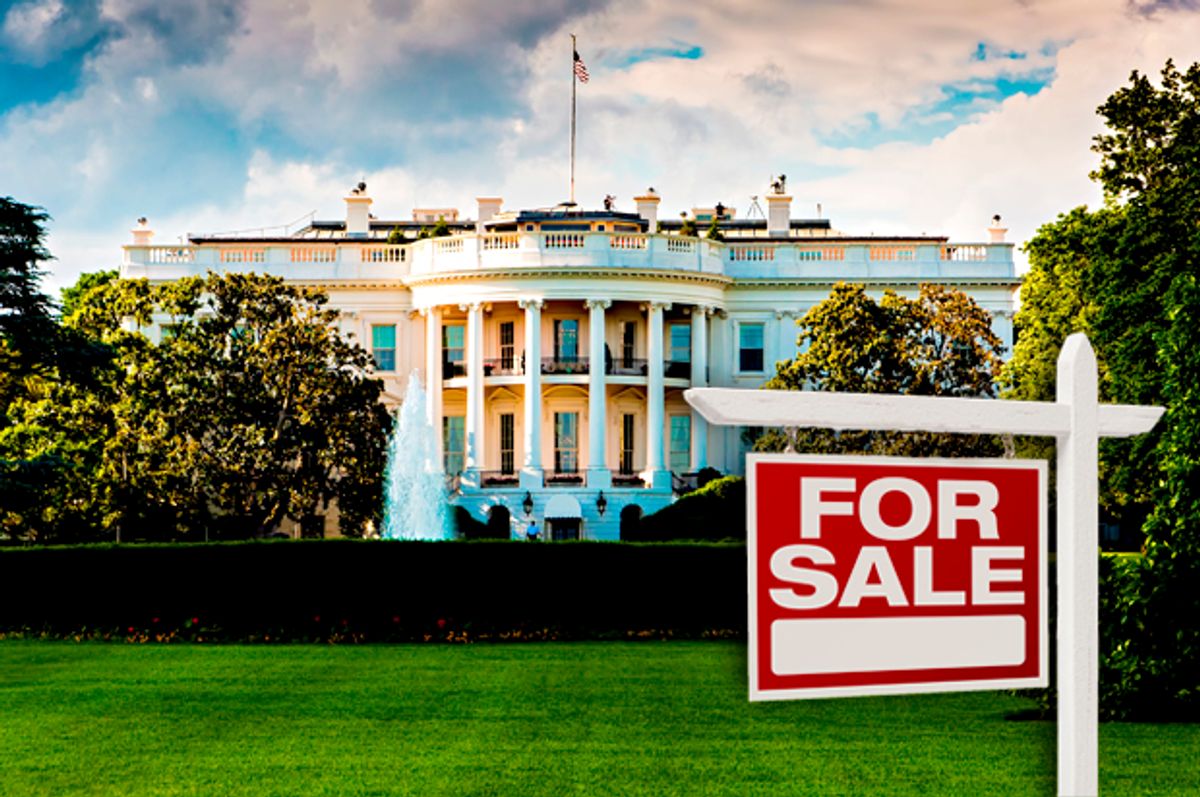 Of the many, many Republican hypocrisies revealed by the party’s support for and election of Donald Trump to the presidency, we can add the charge thrown with abandon at President Obama throughout his time in office that his administration engaged in the dreaded “crony capitalism.”

Crony capitalism is defined as an economy tilted in favor of businesses that have close relationships with the government and lean on those relationships for special treatment — tax breaks or some other form of state intervention. To an extent, this arrangement has long been part of the American economy. But the problem has grown worldwide as globalization has taken off in the last two decades. This has meant a rise in billionaire wealth around the world and an enormous increase in the inequality gap between the world’s richest and poorest people.

The industries that have the closest relationships with government tend to be those that rely on it for licensing, infrastructure and other needs. As examples, this article in the Economist mentions three in particular — oil, casinos and construction. (Sound like anyone we know?) But crony capitalism can also extend to something like healthcare. Some of the provisions of Obamacare opened it up to charges from both the left and the right that it was intended to make health-related industries — Big Pharma, for instance — wealthy at the expense of the rest of the country, and therefore was a sort of crony capitalism.

Or take Solyndra, the solar-panel company that went bust after receiving hundreds of millions of dollars in government grants in the early Obama era to develop green energy. The word “Solyndra” became a buzzword for right-wingers, shorthand for the alleged corruption at the heart of the administration. Whether there is societal value in opening up affordable healthcare or green energy to the general public never seemed to be part of the equation for conservatives. But why would it, when that might detract from their core message that Democrats suck?

Conservative politicians and the fever swamps of the right wing used the term "Solyndra" as a cudgel to beat Obama over his head for years. It was a talking point for Mitt Romney in his 2012 presidential run. Republicans were still bringing it up in this year’s primary, long after the term had become more shibboleth than anything else, something to set GOP voters salivating, like “EMAILS” or “BENGHAZI”.

Then Republicans turned around and put Trump, the ultimate crony capitalist, into the Oval Office. To the surprise of exactly no one who paid attention during the campaign, the race had barely been called before the pile of xenophobic tangelo rinds was taking full advantage of his new position to work on business deals that will enrich himself, his family and any business owner wealthy enough to fly a private jet to New York and kiss his ring.

Part of Trump’s pitch to Republican voters during the primary revolved around the idea that his wealth had come in part from his ruthless exploitation of this crony capitalist system. That his donations to politicians and cultivation of close relationships with them, for example, had helped him build his enormous business empire. Now, he told the voters, he was ready to fix this corrupt system, which had allowed a genius like him to conquer it and make it work for all Americans.

This is, to put it simply, utter bullshit. Even if you were inclined to believe it, everything Trump has done just in the two weeks since the election puts lie to it, from his staffing decisions for his administration to his continuing to conduct private business related to his empire, to his announced policies, like his infrastructure plan.

In fact, the infrastructure plan will likely go down as one of the biggest cons of the early Trump era. From the Washington Post:

Trump’s plan is not really an infrastructure plan. It’s a tax-cut plan for utility-industry and construction-sector investors, and a massive corporate welfare plan for contractors. The Trump plan doesn’t directly fund new roads, bridges, water systems or airports…Trump’s plan provides tax breaks to private-sector investors who back profitable construction projects…There’s no requirement that the tax breaks be used for incremental or otherwise expanded construction efforts; they could all go just to fatten the pockets of investors in previously planned projects.

The plan actually hands out very little money for infrastructure projects. The contractors and businesspeople who take advantage will be under no obligation to spend the money on materials and labor. It is a giveaway to wealthy business owners who could not care less about reopening shuttered factories or putting on extra shifts at the coal mine. It is designed for wealthy people who, like Trump, don’t give a damn about anyone outside their own bubbles. Yes, even those who do not live in a coastal city.

Among the millions of people who will get screwed in this new crony-capitalism-on-steroids era are the majority of Trump’s voters, of course. Not just working-class voters in small Rust Belt towns that the media loves to fawn over as living in “Real America,” but also those making over $70,000 a year and living in the suburbs.

Anyone, in other words, who is not a crony of Donald Trump. His supporters hoping otherwise will discover this soon enough.