It wasn’t just "fake news" presenting a fake Hillary Clinton: She was held to impossible standards 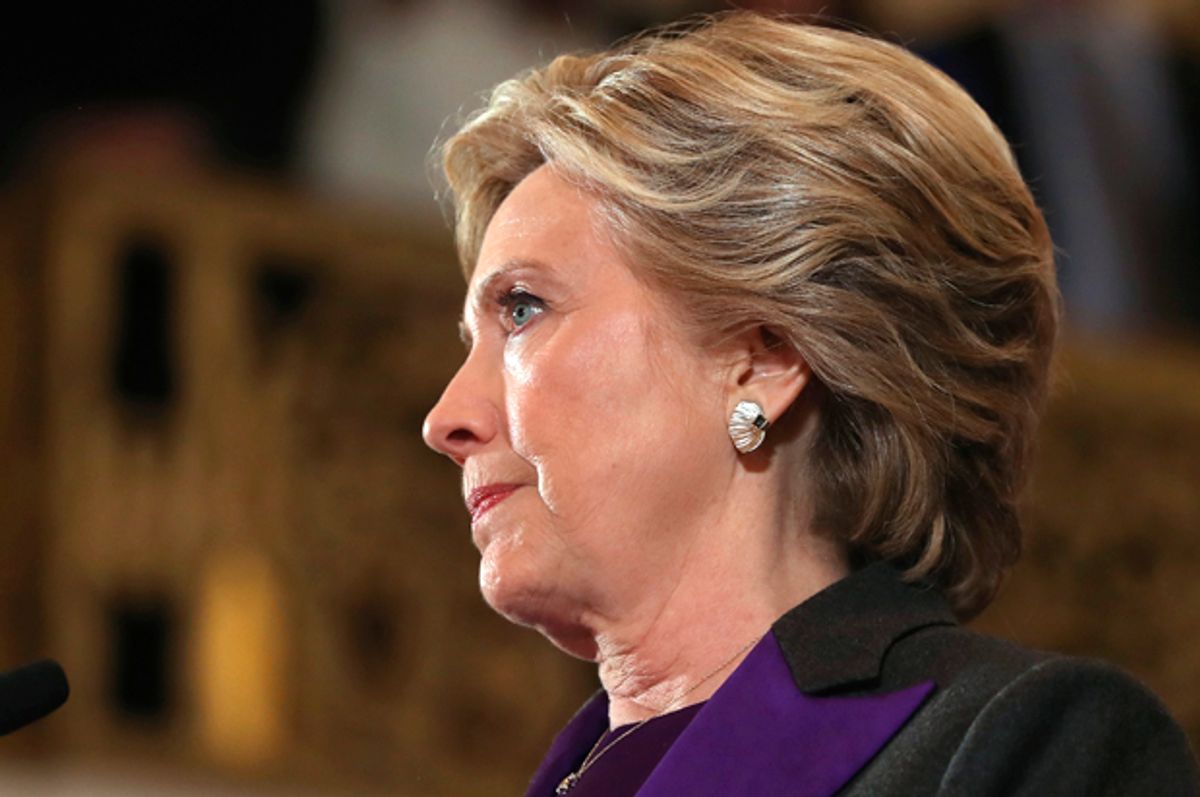 Despite Hillary Clinton’s long and demonstrable commitment to public service and liberal reform, many voters in the 2016 presidential election were persuaded that she was corrupt, mercenary and even murderous. A sinister Hillary Clinton dominated conservative media, but also appeared in mainstream journalism.

The bias against Hillary Clinton was not simply a story the media reported — it was the unexamined narrative the press repeated over and over. Researchers at Harvard University have documented the disproportionately negative media coverage during the earliest phases of the presidential campaign and how it contributed to a false view of Clinton. Former New York Times editor Jill Abramson extensively reviewed charges that Clinton was a liar and dismissed them, concluding that she is “fundamentally honest and trustworthy.” These reports and others like them struggled to find traction as stories claimed the race was between two unlikable candidates — a distorted notion that became known as the myth of false equivalence.

So why was the lie more persistent than the truth? Why was “Crooked Hillary” a more compelling figure than “Fundamentally Honest Hillary”?

My forthcoming book, which examines the Anita Hill testimony and other very public cases of women giving testimony, provides a context for understanding Clinton’s vulnerability to the charge of dishonesty.

I’d argue that the media’s portrayal of Clinton has less to do with her actions than with the persistent tainting of female witnesses based on gender bias. In short, my research shows that women are doubted. Women are seen as threatening stability when they show ambition and seek power. Their success threatens the association of masculine power with order.

From Eve to Clytemnestra to Lady Macbeth, powerful female figures stir up deep-seated and irrational fears of women’s proximity to power. They prompt anxieties about masculinity. These fears can be exploited and directed against particular women, as far-right Steven Bannon’s campaign against Clinton demonstrates.

These narratives and others like them align the act of doubting women with rationality and objectivity, making them feel legitimate. In other words, it is not only traditionalists who feel that women can’t be trusted with power; cultural narratives of blame make it feel right in general to doubt women.

This old story prevents other narratives from emerging. When the media recycled anecdotes that discredited Clinton instead of reframing their coverage to address the emergent themes of her historic run, they ensured that Clinton’s untrustworthiness would remain the story.

That Clinton was being held to an impossibly high standard was flushed into view when Donald Trump was caught on a hot mic bragging about sexual assault and 15 women came forward alleging his abuse of them. Even after Trump became the looming and groping embodiment of predatory masculinity, the old story that “Hillary lied” could be revived and re-centered as “the” story.

On the night after the election, NPR’s valedictory story reported everything that had been done to Clinton during her long career, suggesting she had brought it all on herself. The verb in the headline about her narrow defeat was "failed." What was done to Hillary Clinton became what she deserved. Where have we heard this before? It is the tactic of rape culture to blame women for failing to prevent the harm that is perpetrated against them.

While Trump was the target of lawsuits and admitted evading federal income taxes for years, the focus on her email endlessly recycled the claim of her fundamental untrustworthiness. FBI Director James Comey had only to utter the word nine days before the election and then again three days before to halt and then halt again her momentum. The words “email,” “lying” and “woman” fell like a series of dominoes. Adding “nothing to investigate” to the string of words never mattered. The deep emotion was tapped: You cannot trust women with power.

Hillary Clinton’s candidacy presented voters with an opportunity to do something they had never done before: to elect a woman president and break the “highest, hardest glass ceiling.” Clinton has always pushed a feminist agenda in her roles in public life. As a civil rights lawyer and advocate for women and children, as a first lady who traveled to China to declare that "women’s rights are human rights," as a U.S. senator and as secretary of state. Although some commentators have declared that this was an election in which voters chose change over continuity, we should be clear that while change was on the ballot with Clinton, many voters preferred something they knew all too well: a man in charge.

There is no single explanation for why Donald Trump, a political neophyte who promoted white nationalist furor and gleefully called for his opponent to be thrown into jail, defeated Hillary Clinton, a seasoned progressive with substantial experience in elected and appointed office. However, the ways in which arguments against Hillary Clinton’s trustworthiness and fitness for leadership replaced a full treatment of her qualifications should compel us to acknowledge that men can generate ambivalence and retain status, but not women. Instead, women who seek power can come in for humiliation.

Clinton was dismissed as unlikable. Her voice and looks were harshly scrutinized. Derogatory names were directed at her by her political opponent and a range of commentators in a way that was indistinguishable from sexual harassment.

For her, the standard was perfection, a standard against which only she was measured.

Leigh Gilmore is a distinguished visiting professor of women's and gender studies at Wellesley College.