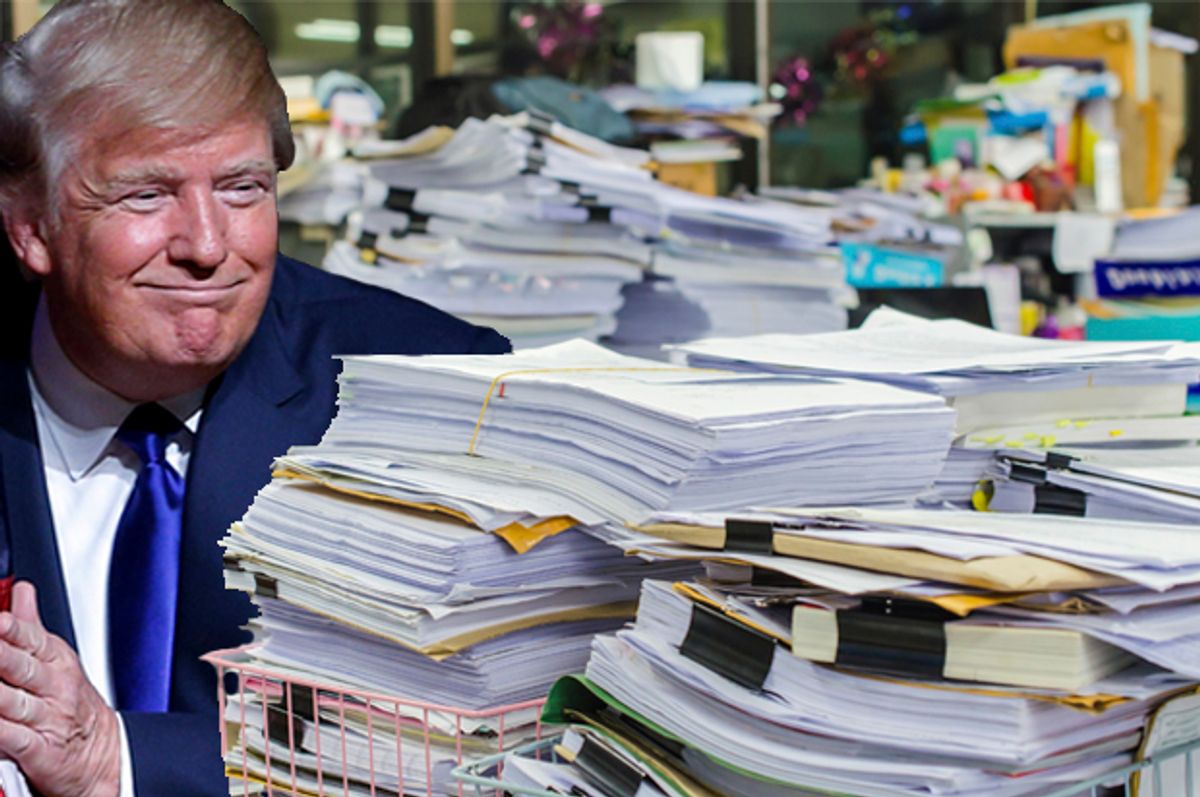 "This could be one of the most unrestrained governments that we've seen in this country in who knows how long," Ryan Shapiro warned.

Shapiro has been described as a "FOIA superhero" — one of his many monikers. The punk-turned-transparency advocate has filed thousands of Freedom of Information Acts requests and sued major government agencies over their refusals to abide by transparency laws.

Now he has his sights set on the impending administration of President-elect Donald Trump.

"The Trump administration has made it clear that it is entirely hostile to the notion of transparency," Shapiro told Salon in an interview.

Mere days after Trump was elected, the FOIA guru launched a campaign with the goal of doing just that.

Shapiro calls it Operation 45, after the 45th president. He has launched a GoFundMe project to raise funding for the FOIA requests and legal fees.

Salon discussed Operation 45 with Shapiro via phone. He spoke with enthusiasm about the project, but also with some anxiety about the uncertainty the future holds.

The Washington Post described Donald Trump during his campaign as the “least transparent U.S. presidential candidate in modern history,” a criticism echoed by Shapiro. The day after the far-right billionaire's shocking victory, Shapiro noted, the Freedom of the Press Foundation cautioned that he is “an enemy of press freedom unlike any we have seen in modern presidential history.”

"Given Trump’s authoritarian aspirations and overt contempt for transparency," he said, "his administration appears on course to embrace secrecy even more ferociously than has Obama's."

Shapiro, who views himself as nonpartisan and non-dogmatic, harshly criticizes Republicans and Democrats alike for breaking their promises.

"Despite entering office promising to be the most transparent administration in history," he explained, "the Obama administration has brought more Espionage Act prosecutions of whistleblowers than all previous administrations combined."

Indeed, Shapiro has been a thorn in the side of the Obama administration. The Department of Justice has called him the "most prolific" FOIA requester. And the FBI went so far as to claim that responding to Shapiro's myriad FOIA requests could "significantly and irreparably damage national security" — an accusation transparency advocates scoff at.

At present, Shapiro has 12 ongoing FOIA lawsuits against a slew of U.S. government departments and agencies, including the FBI, CIA, IRS, National Security Agency, Defense Intelligence Agency, Department of Justice, Secret Service and Bureau of Alcohol, Tobacco, Firearms and Explosives.

"It’s not surprising those in power wish to keep their actions secret," Shapiro told Salon. "What’s surprising is how readily we tolerate it."

Regardless of who was to become president, Shapiro planned to hold them accountable. Before the election, the punk rock-loving FOIA master — who somehow also finds the time to work on a Ph.D. in the Massachusetts Institute of Technology's Department of Science, Technology and Society — was prepared to request away.

Like so many, Shapiro simply assumed Hillary Clinton would win the presidency, and had already been making plans to pressure her administration to be transparent. "We expected it to go from bad to worse," he explained. "Instead it went from bad to oh-my-god."

Trump, Shapiro said, "clearly has even less of a commitment to transparency than Clinton, which is saying a lot." He added, "Not only is Trump’s profound hostility to openness likely to encourage greater agency noncompliance with FOIA, it also has the potential to enfeeble FOIA and other vital transparency tools in the long term."

For Operation 45, Shapiro is teaming up with attorney Jeffrey Light, a specialist on FOIA litigation. Light has been Shapiro's go-to lawyer on past FOIA lawsuits.

Vice journalist Jason Leopold, a fellow FOIA virtuoso who shares Shapiro's punk proclivities, also currently shares two lawsuits with Shapiro against the FBI, IRS and Secret Service. The first is for official records on Trump's insinuation that "Second Amendment people" might assassinate Clinton, as well as for records on Trump's call for a hack of Clinton's deleted emails. The other lawsuit is for FBI records on the Trump Foundation, Trump University and Trump Entertainment Resorts.

For Shapiro, who currently has thousands of requests in motion with federal agencies, FOIA is not just about the individual requests; it is part of a larger mission.

"The democratic process cannot meaningfully function without an informed citizenry, and such a citizenry is impossible without broad public access to information about the operations of government," he told Salon.

"The Freedom of Information Act is one of the most underappreciated elements of the entire American experiment," he continued. "The notion that the records of government are the property of the people, and all we need to do to get them is to ask, is radically democratic."

But things are not rosy. "FOIA is broken," Shapiro explained. "One of the core causes of FOIA’s brokenness is that there are essentially no penalties for noncompliance. So despite FOIA being federal law, if an agency doesn’t want to comply with the Freedom of Information Act, it often simply refuses to do so."

He lamented that the FBI "does nearly everything within its power to avoid compliance with FOIA," which leads to "the outrageous state of affairs in which the leading federal law enforcement agency in the country is in routine and flagrant violation of federal law."

When he is not filing FOIA requests, writing his dissertation for MIT or listening to hardcore punk, Shapiro is also a research affiliate at Harvard University's Berkman Klein Center for Internet & Society.

He did not always know that he would devote his career to the struggle for transparency. Initially, Shapiro explained, he just wanted to seek information on state campaigns against the animal rights and environmental justice movements.

In 2004, the FBI designated activists from these movements as leading domestic terrorist threats, even though they had not caused any physical injuries. Advocates who wrote slogans against animal experimentation on the sidewalk in chalk faced federal felony terrorism charges, Shapiro recalled, and he was outraged.

"I'm just some angry punk rock kid," Shapiro joked over the phone, "who happens to be a little older now, but basically I'm saying the same things I have been saying since I was 12 and wearing Dead Kennedys shirts."

His dissertation explores how the FBI and corporations use the national security apparatus to repress animal rights activists and classify them as "threats to the state." But Shapiro said the FBI's fierce resistance to his research led him to expand the focus of his work to efforts by U.S. intelligence agencies to maintain secrecy more broadly.

Some of Shapiro's previous FOIA requests have exposed how the FBI has considered applying federal terrorism charges against animal rights whistleblowers; how the FBI has instructed agents to withhold information about surveillance from prosecutors and defendants; and even, as Salon has previously reported, how the U.S. government targeted Nelson Mandela and the anti-apartheid movement in South Africa as supposed threats to national security.

Going forward, Shapiro has hopes that other organizations and NGOs will help take action to hold a President Trump accountable. But it is not just about making the upcoming administration transparent, Shapiro noted. It is also about protecting the tools that currently exist. And the struggle is going to be tough.

"We are genuinely worried about the survival of FOIA itself as a tool under President Trump," he warned.