Yes, a tiny slice of the electorate went from Obama to Trump, but they don't explain how the Democrats went wrong 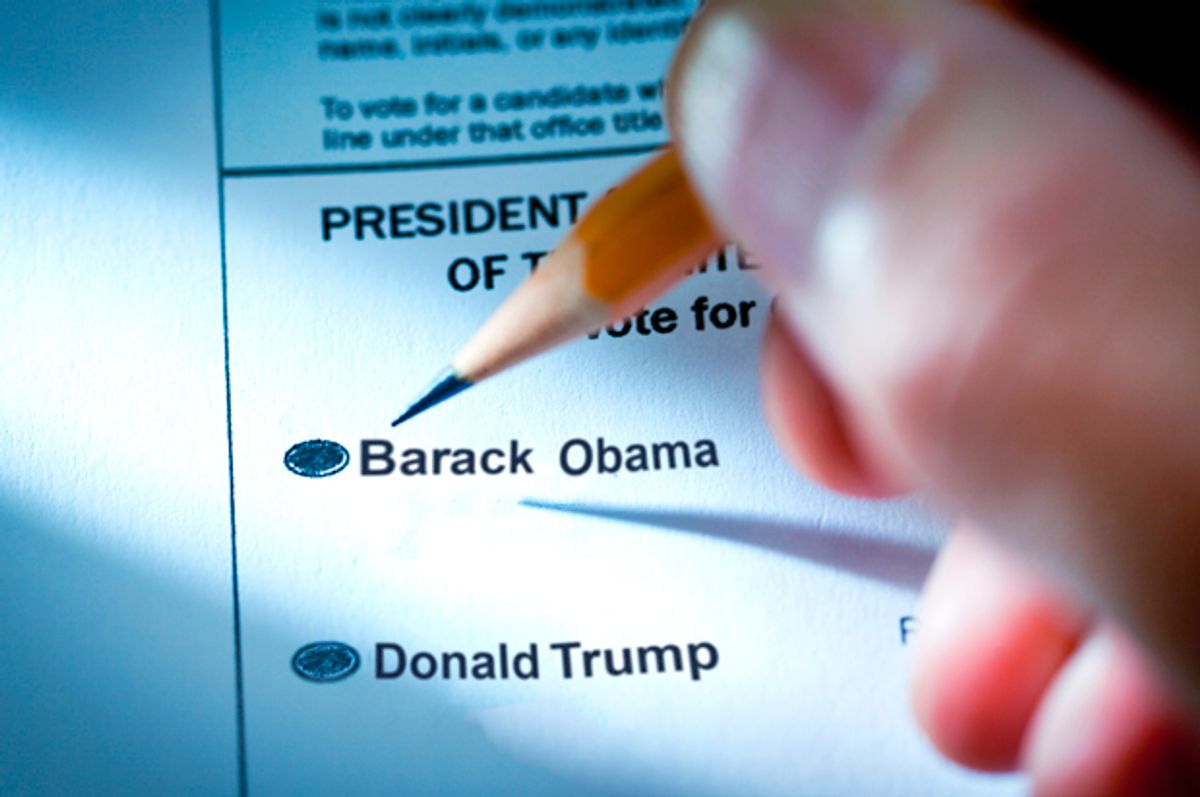 Since Donald Trump’s surprise victory in the presidential election, one number grasped onto by many pundits is that 298 American counties carried twice by Obama flipped to Trump this year. Some have asked how these voters can be motivated by racism, if they voted for a black man twice? Others have wondered how they could not be, given the intensely racialized campaign that Trump ran. There is increasingly strong evidence, however, that in many of these counties the change was mainly the composition of the electorate. Black, Latino and working-class voters who backed Obama stayed home, and white Trump supporters came to the polls en masse.

A New York Times analysis of YouGov data finds: “For every one voter nationwide who reported having voted for Obama in 2012 and Trump in 2016, at least five people voted for Trump after not having voted four years ago. Clinton attracted substantially fewer 2012 nonvoters, the data show.” YouGov data suggest that only 7 percent of Obama voters flipped to support Trump, and the real number could be even less. Though these individuals make up a small share of Trump voters, they have drawn extensive attention. It should be noted that my analysis is not definitive. There is still much more evidence to come, and the major post-election surveys have not yet been released. The data sources I’m working with have small samples. There is enough evidence, however, to reject the idea that racism was not central to Trump's appeal simply because some of his voters had previously voted for Obama.

YouGov, a market-research and polling firm, provided me with data comparing Obama voters who went with Clinton this year to Obama voters who ended up voting for Trump. As the data show, these voters are quite similar to Trump on policy attitudes, particularly his signature issues like trade and immigration, though they were also sympathetic to progressive reforms like higher minimum wages and free college tuition. Only 35 percent of former Obama voters who went for Trump believe immigrants should be able to stay in the country and apply for citizenship, compared with 78 percent of Obama voters who support Clinton. However, Trump supporters support free college (48 percent in favor, 39 percent opposed and the rest were “not sure”) and a higher minimum wage (52 percent in favor, 37 percent opposed). We know from research, however, that policy preferences can flow from partisan identity rather than the other way around. That is, it may be that Trump supporters dislike NAFTA because they support Donald Trump, who opposes NAFTA. To solve this, I turned to the ANES 2016, which has the advantage of being performed early in the election cycle (January 2016), when it was far from clear that Trump would be the Republican nominee. Even at this early date, racial resentment strongly predicted how former Obama voters felt about Trump.

I examined racial resentment, measured by questions like, “Irish, Italian, Jewish and many other minorities overcame prejudice and worked their way up. Black people should do the same without any special favors.” (Here is an earlier extensive discussion of racial resentment.) The mean racial-resentment score among former Obama voters who favored Trump was dramatically higher than among those who favored Clinton. Among white Obama voters who supported Clinton over Trump, 43 percent said it was “not at all likely” that many whites are unable to find jobs because minorities are taking them, compared to 17 percent of Obama voters who supported Trump.

That is, the voters who voted for Obama and then converted to Trump did indeed express high levels of racial resentment, high enough to be statistically significant in a model that controlled for party, ideology, education, age, gender, income, views on economic performance, racial resentment and views on trade. (This is also true using different measures of support for Trump and Obama). The charts below shows predicted "feeling thermometer" scores for Trump among Obama supporters, by racial resentment, views on the economy and support for free trade. Another shows that attitudes about white jobs affected Trump support (the question was only asked of white respondents). Simply because an individual voted for Obama in the past does not mean racial resentment didn’t influence their views on Trump. What should Democrats take away from this election? The focus on voters who shifted from Obama to Trump is a distraction. They are certainly important, but Trump was far more effective at getting non-voters and lapsed voters out than he was at converting Obama voters. Those he did convert seem to be disproportionately conservative, and attracted to his message of white-exclusive populism. But the solution is not for Democrats to abandon “identity politics,” a sneaky term for its commitment to racial justice, gender equality, LGBTQ rights and inclusivity. Rather, Democrats must put forward their own populist agenda, one that addresses the real causes for stagnant wages (financialization, weaker unions, lower minimum wages, slack labor markets) rather than scapegoating immigrants and people of color. During the campaign, Hillary Clinton could and should have spent more time in the Rust Belt discussing auto bailouts, minimum wages and the rigged economy.

But there’s another aspect to consider. A recent New York Times piece on non-voters in Milwaukee quoted one resident as saying, “Milwaukee is tired. Both of them were terrible. They never do anything for us anyway.” This may sound strange for people knowledgeable about Obama’s policy agenda, but in some cases, Democrats actually intended to reduce the political impact of their policies. A perfect case comes from Michael Grunwald’s reporting on an $800 per worker tax cut included in Obama's stimulus package:

[Obama’s] economists wanted to dribble out the cash to recipients a few dollars a week in their paychecks, because studies showed they would be less likely to spend the windfall if they realized they were getting it. His political advisers argued that it would be insanity to conceal middle-class tax cuts rather than send Americans fat envelopes with Obama’s name on them. But Obama sided with his policy team, and later surveys showed that less than 10 percent of the public had any clue he had cut their taxes.

In other cases, the Democratic failure is more nefarious, as when Obama abandoned his promise to prevent 3 to 4 million homeowners from falling into foreclosure. This not only cost the administration an important victory for the middle class, it means that Democrats struggled to target and mobilize black and Latino supporters who had lost their houses. After an election decided by a few hundred thousand votes spread across a handful of states, it’s hard not to wonder if saving 4 million homeowners from foreclosure could have influenced the outcome.

Democrats practice policy, not politics. Programs like Obamacare are wonk-approved, but pay insufficient attention to mobilizing beneficiaries as citizens and constituents.When Democrats controlled the presidency and Congress, they downplayed voting rights. Though organized labor is the only bastion of working-class organizing, Obama failed to pursue measures that would have have aided labor organizing. My organization, Demos, was one of many to argue that the Obama administration made insufficient efforts to register voters using the healthcare exchanges. Republicans may imagine that Democrats provide people of color with endless benefits and use those benefits to mobilize voters, but in reality Democrats have entirely failed to do this. As I've shown previously, many whites (particularly Republicans) have a distorted view of government, believing it benefits people of color when benefits actually accrue slightly disproportionately to whites.

When Republicans take power, their first priorities are voter suppression and right-to-work, their second is to destroy the capacity of government to aid working families and their third is to turn the government into a patronage machine for wealthy whites. Democrats have failed to understand that in order to win, they must do the opposite. Voting rights must be a priority, and policies should strengthen the ability of working people to organize and mobilize.

Government capacity should be bolstered, creating both effective governance and public-sector jobs. Making post offices, DMVs and other government agencies function well is not sexy, but research shows that it can increase positive views of government, which increases support for services. Americans believe that government only works for elites and the wealthy, and the solution is to make government work better for average citizens. Policymaking should center on the direct provision of government services in a way that can help activists organize defined constituencies.

Pursuing policy in this way has political tradeoffs. A more mobilized and organized working class might well make political demands that the Democratic Party is not eager to pursue, due to ideology or fealty to donors. (Grassroots organizers on the right have repeatedly made such demands on the Republican Party.) In addition, these policies might fail to meet the wonkish ideal. It is likely true that a higher minimum wage is not be the economically optimal way to aid the working class. But because other solutions are obscured by the submerged state, they are more politically vulnerable.

Similarly, voters may prefer direct rent control and rent regulation rather tweaks to zoning regulations. It may be true that small stimulus checks spread over a period of time will benefit households more than one large check, but if this unseen stimulus leads voters to feel comfortable voting for a Republican, the end result is even less stimulus. Giving workers, unions, activists, organizers, immigrants' rights groups, #BlackLivesMatter and other groups a seat at the table is necessary for Democrats to be electorally successful -- and, given how weak the Democratic bench is, to foster future political talent. Party elites will have to cede some power to make this happen.

The feverish debates over race and class or “identity politics” are going nowhere, because they are grounded in a bad-faith online culture and fueled by personal grudges rather than concerns about actual organizing and politics. The new working class is racially diverse and gender-diverse, but it is also demobilized. The mobilizing institutions upon which Democrats have so long depended on have been crushed, and Democrats either sat on the sidelines while they were crushed or actively aided in their destruction. Electoral reforms around voting, districting and registration, along with investments in long-term organizing and policy design aimed creating mobilized, engaged constituencies and inclusive economic populism are the only possible path forward for a successful Democratic Party.