The slow-motion decline: Resisting the gradual erosion of democratic institutions under President Trump

While the debate over "normalizing" Trump rages, experts and academics sound the alarm over the damage he can cause 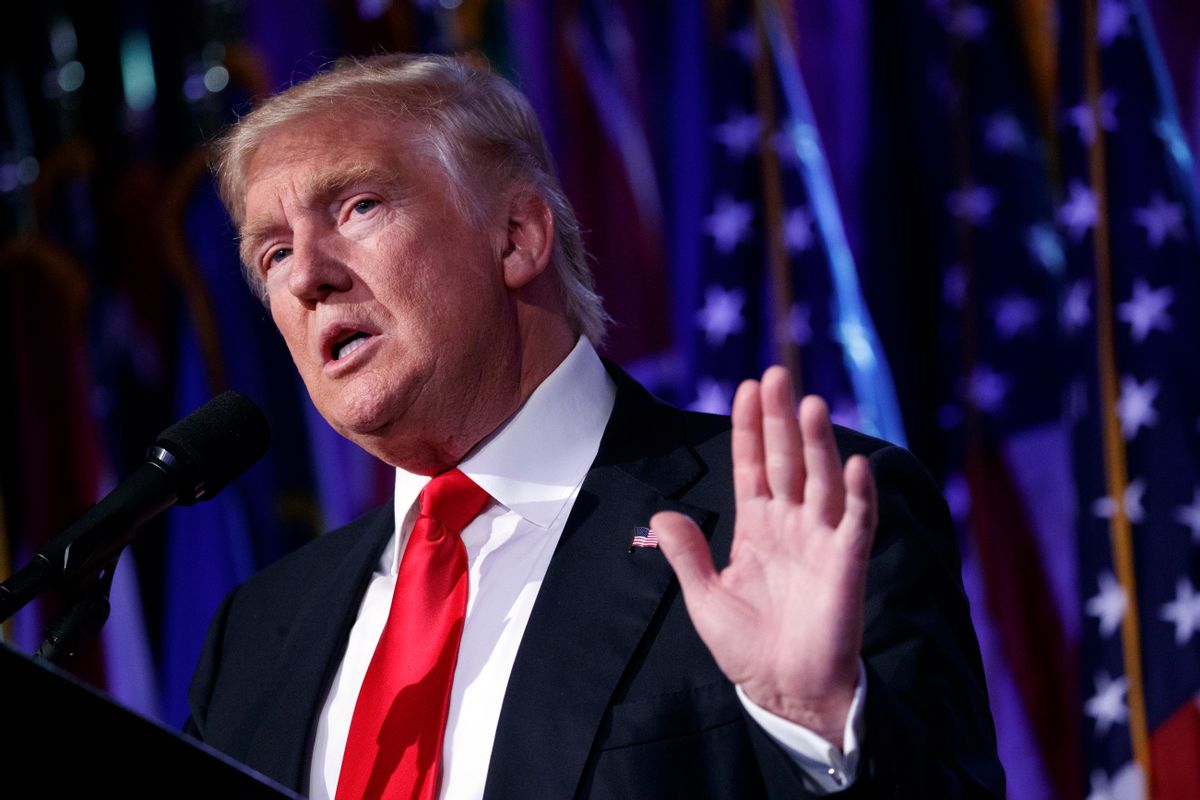 In the days since Donald Trump won the presidential election, I’ve been struggling to find what feels like a proper balance between quiet resolve and “literally every stitch of clothing on my body has erupted into flame” freakout. I suspect I’m not the only one going through these sorts of swings, and each time I start leaning back towards quiet resolve, something happens that pushes me towards the panicky rending of fiery garments.

Take, as an example, this series of tweets from Dartmouth political scientist Brendan Nyhan about how the people who study and report on the collapse of liberal democracies are genuinely alarmed by the election of our new president.

It’s bracing to read political scientists and people familiar with autocratic rule write about the parallels they see between the America that elected Donald Trump and the undemocratic regimes they study. Scholars and academics have been writing about this degradation of norms ever since it became clear that Trump was emerging as a potent political force.

The bulk of Donald Trump’s political life prior to capturing the presidency was devoted to undermining the established institutions of democracy: from the campaign to destroy Barack Obama’s legitimacy as president to his unrelenting hostility towards the press to his pernicious insistences that the election was being “rigged” against him. Now he will have all the levers of the presidency available to him to continue this crusade to erode public confidence in the very political and social institutions that are supposed to keep him in check.

There have been numerous entreaties from politicians of both parties to give Trump the benefit of the doubt and afford him a chance to govern responsibly. But there is nothing in his background to indicate that he is interested or capable of behaving as a responsible chief executive. And nothing he’s done as president-elect should reassure anyone that he’s planning to change.

Trump is sitting on an unprecedentedly massive conflict of interest in the form of a sprawling business empire from which he has so far refused to disassociate himself. The Trump transition team’s work to set up the incoming administration has already been compromised by Trump’s business interests. The advisers and lieutenants Trump is appointing to positions of authority have two common traits: They are loyalists, and they enable Trump’s worst instincts. His chief strategist is a champion of white nationalism, and his potential Homeland Security secretary has plans to reinstitute a registry of Muslim immigrants. Trump’s national security adviser considers the Islamic faith — all of it, not just the radicalized fringes — to be illegitimate and akin to a “cancer.” Even the supposedly “mainstream” staffers Trump has appointed, like chief of staff-designate Reince Priebus, are giving a soft embrace to this extremism.

In a situation like this, the body you’d expect to provide a necessary check on a corrupt, illiberal president would be the Congress. But the Republicans who control the legislature have made clear that they’re more invested in maintaining power than in maintaining democratic institutions. The last eight years have taught Republicans that recurring and persistent violation of governing norms can result in dramatically increased political power. With Trump’s election, the Senate GOP realized an ill-gotten payoff from its unprecedented obstruction of Barack Obama’s nominee to replace the late Antonin Scalia on the Supreme Court. The entire party is involved in a coordinated assault on voting rights as a means of suppressing Democratic turnout and maintaining its authority by making it harder for the other side to vote.

What reason do we have to think these same Republicans would rise to the challenge of defending democratic institutions against Trump’s depredations? When it comes to the attack on voting rights, Trump will almost certainly be their ally. And as Greg Sargent wrote in the Washington Post, Trump presents the congressional GOP with a golden opportunity to implement its agenda, so Republican lawmakers have every reason to simply look the other way as he loots the presidency.

The most unnerving part of all this is the reflex to treat it as “politics as usual” and to view Trump as an eccentric who will be sobered by the realities of the presidency and remake himself as a politician in the traditional democratic mold. Already you’re seeing a backlash to the resistance to “normalizing” Trump, with powerful media figures working to dilute the outrage by treating Trump’s electoral victory as proof of his normalization.

There’s an understandable urge not to overreact and to maintain faith in the system, even as the system starts to falter under sustained attack. But as Columbia University political scientist N. Turkuler Isiksel wrote following Trump’s victory, this sort of blind faith can be incredibly damaging: “It is precisely such overconfidence in the United States’ long and illustrious tradition of liberty that could lull the American public into a false sense of security and facilitate the rapid destruction of that very tradition.”

That brings us back to the question of how best to react to the damage that has already occurred and the destruction that's yet to come. Obviously those of us who are concerned by the slow-motion erosion of governing institutions run the risk of marginalization by living in a state of constant panic. That redounds to the benefit of the people doing the destruction, who can malign their critics as hysterical and unreasonable. But sitting back and waiting for the right moment also carries risks, as there very well might not be any sort of tipping-point event that screams “AN AUTHORITARIAN IS TAKING OVER” in bright neon lights.

It will be a frustrating and protracted fight with an uncertain outcome. I still don’t know what the proper response to all this is, but I do know that president-elect Donald Trump has done nothing to deserve the benefit of the doubt.