We can't all be the Bluths: Are we too quick to call our families "dysfunctional"?

Some days it seems like every extended family is self-diagnosed dysfunctional. Maybe that's taking the easy way out 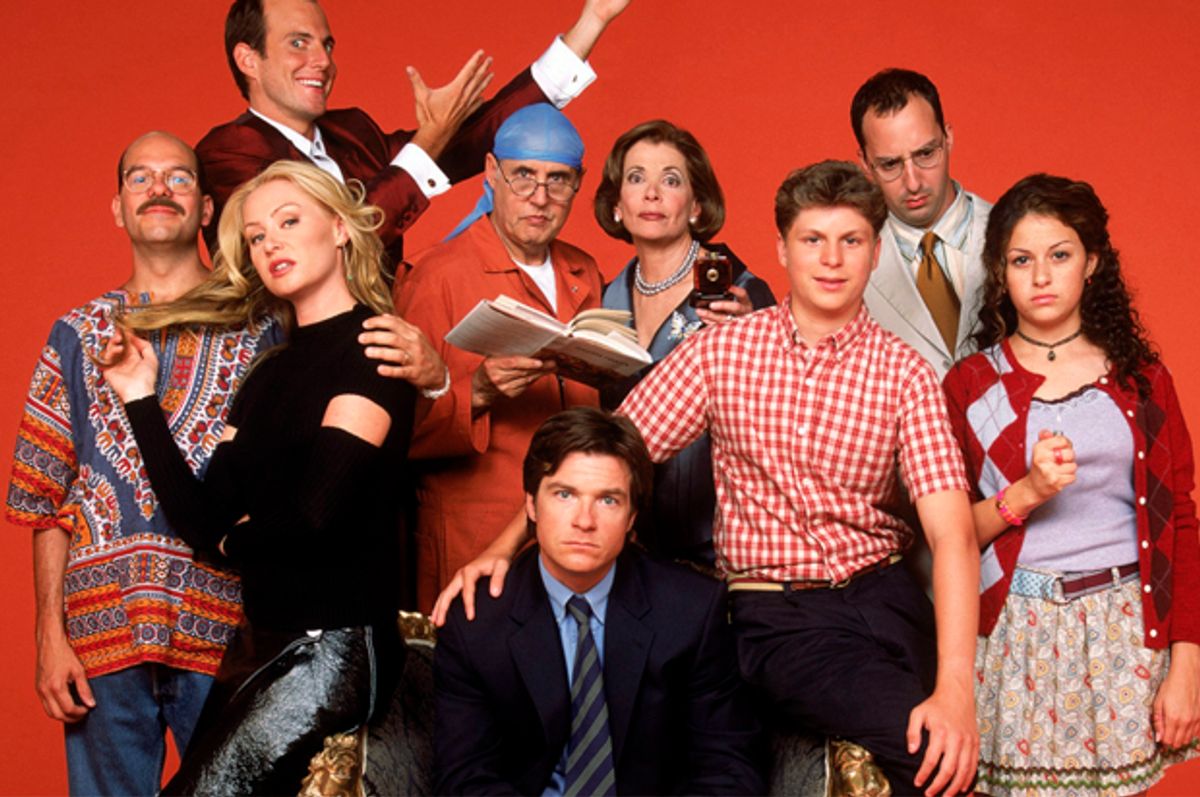 When I was growing up, my mom said we were cursed. Whether we were celebrating a birthday or a Friday, the last day of the school year or our first night on vacation, when we went out for dinner, storm clouds followed our family. One or many of us — me or my parents or my siblings — got sarcastic, snippy, sad, sensitive. There were tears, shouting matches, epic demonstrations of silent protests, storm-outs, thrown-down napkins, dozens of plates of food, untouched and relegated to doggy bags.

In the aftermath of what she called a “blow-up,” my mom would take a sagacious view of our little nuclear bunch.

“Maybe it’s just us,” she would say. She seemed to find scant consolation in the diagnosis, but she offered it anyway. “Our dysfunctional family.”

I wonder if she knows. I remember giant meatballs from a restaurant in Wisconsin and au gratin potatoes from a supper club in the state, too. I remember a slice of spumoni pie at a white-tablecloth place in Michigan and a bowl of chowder outside Gettysburg and the first time I saw someone fling food on a flat grill, at a Disney World hibachi, where I also remember, as clear as five minutes ago, my baby sister gnawing a turkey drumstick on a hill outside Epcot. And then there were the regular spots: I remember fried ice cream rolled in cornflakes, Blizzards on the way back from dinner, the fried zucchini — I don’t even like fried zucchini — from a place a mile or two from home, the spoonable cornbread from a Mexican chain in the mall, the green Jell-O from a Bohemian place: it always came with Cool Whip.

I wonder if my mom knows: I don’t remember the subject of a single demonstration of our family’s dysfunction. And that makes me wonder if the word isn’t a failure of imagination and a missed opportunity for greater empathy.

In half a second, Google pulls up 450,000 results for the search term “dysfunctional family.” The Counseling Center at Texas Women’s University presents a PDF handout on the topic, “Dysfunctional Families: Recognizing and Overcoming Their Effects,” which identifies parents — “Deficient Parents,” “Controlling Parents,” “Alcoholic Parents” and “Abusive Parents” -- as the prime culprits of unhealthy function. Bustle recasts the problem with everyone’s favorite corporate black label (“3 Problems People From Toxic Families Often Struggle With” — and the verdict is “Anxiety,” “Trouble Interacting with Others,” and “Difficulty Trusting Reality”). There’s a Thought Catalog offering (“15 Signs You Come From a Dysfunctional Family”), a barrage from BuzzFeed (“32 Ways You Know You Grew Up In a Dysfunctional Family,” which equates the condition with bad haircuts and awkward holiday photos, garnering a reaction of 213 LOLs, 145 emoji hearts, 25 Fails — the same number of Cutes it received, along with 1 YAS), and a veritable treasure trove at the Mudrashram Institute of Spiritual Values, where George Boyd’s 1992 handout, “When You Grow Up In a Dysfunctional Family,” allows readers to assess — so long as they’re down for some heavy journaling and chart-drawing — whether they have a “Whole Self” or a “Damaged Self.”

Like my mom, our culture seems divided about this term. Is it a condition, with signs and symptoms, a serious and affecting phenomenon, or something to revel in? After all, doesn’t acknowledging dysfunction give us a sort of free pass in life? We don’t have to pass the bread nicely at the dinner table — that’s for those other families.

The barometer of the Internet shows there’s an appetite for depictions of screwed-up kin. At Thrillist, Rose Maura Lorre brings together the Bunkers and the Bluths on their list, “The 20 Most Dysfunctional Families in TV History,” which even digs up the backstory dirt on Lorelai Gilmore, whose “passive-aggressive rapport” with her buttoned-up mom and “stoic father … as prickly and vexatious as a scratched PJ Harvey record” give her a spot with The Bundys and The Sopranos. And then there are the reality offerings — okay, what reality show doesn’t celebrate family strife? — and even shows like CMT’s series “My Dysfunctional Family,” which is like “What Not to Wear” for interpersonal existence, wherein “family fixer Dave Vitalli brings troubled teens and their sometimes wayward parents back from the brink of disrepair.”

And, truly, what art or literature hasn’t found a little — or a lot — compelling about dysfunctional clans. “All happy families are alike,” Leo Tolstoy wrote in "Anna Karenina," “each unhappy family is unhappy in its own way.”

I’m not looking to discount the realities of life with a mentally ill parent, the horrors of abuse, or the many other struggles people encounter in and around those they’re closest to. Nor am I suggesting a gauging or ranking of psychological, emotional, or physical woundedness — anyone who has ever had to “Rate My Pain” at the doctor’s office knows that, on the wrong day, in the wrong weather, after the wrong night of sleep, sniffles can be a 10. Pain and our experience of injury is subjective, which is why, I imagine, so many people relate to dysfunctional families. All groups of people sharing a bathroom and a cooking space and a television experience conflict, right?

And context is everything. I have a friend whose father is a functioning alcoholic, the sort of man who comes home from work and, without missing a beat, goes through half a case of Budweiser. My friend doesn’t like this, but neither he nor his mother nor his siblings do more than acknowledge this as a sub-prime situation. “That’s Dad,” they seem to hint. Is my friend’s family in denial of the dissent among their cheery ranks? (They’re so happy! They rarely go out to eat, and when they do the tension at the table isn’t a fog.) Or are they just blessed with empathy, a quality that all signs and sources seem to acknowledge as lacking in dysfunctional families?

What I do wonder, though, is whether self-diagnosis isn’t … well, the path to a self-fulfilling prophecy. “Fake it until you become it,” Dr. Amy Cuddy touts in her gone-viral TED Talk. That’s the line I always remember from that lecture, but Cuddy arrives at that wisdom by talking about body language, how the smallest readjustments of posture can radically alter the presence we emit in our lives.

Maybe, I want to believe, for many of us, dysfunction is a choice.

I’ll admit to being biased. Though the materials from Texas Women’s University cast blame on parents, I know firsthand that being a kid with mental illness doesn’t make the family ship sail smoother. Maybe I don’t remember so many of those mealtime fights because I was the instigator, a teenager who didn’t want to get along with her parents, who didn’t want to eat another this or that, who resented being cast as dysfunctional for suffering from depression or bulimia; or maybe, in the big scheme of things, those fights didn’t matter.

It’s easy to make a narrative out of our problems or discomfort -- it’s an endless rope ladder of blame, and one can climb it all the way down the family tree, until she’s neck-deep in genealogy. My great grandmother had depression and migraines, I recently discovered from an uncle. But you’d never know because that’s not how she acted.

To Google “dysfunctional family” is to confront a series of questions “People Also Ask.” “What constitutes a healthy family?” tops that list. With the holiday season upon us, I hope that more of us can strive to see the ways in which our families are functional, blessed and whole, alike in their differences, and not always anyone’s first choice of dinner companions.