Forget Jill Stein's recount! It's yet another distraction from the deep structural problems that led to President Donald Trump

No deus ex machina will save us from you know who. Hope lies in the hard, unsexy work of political organizing 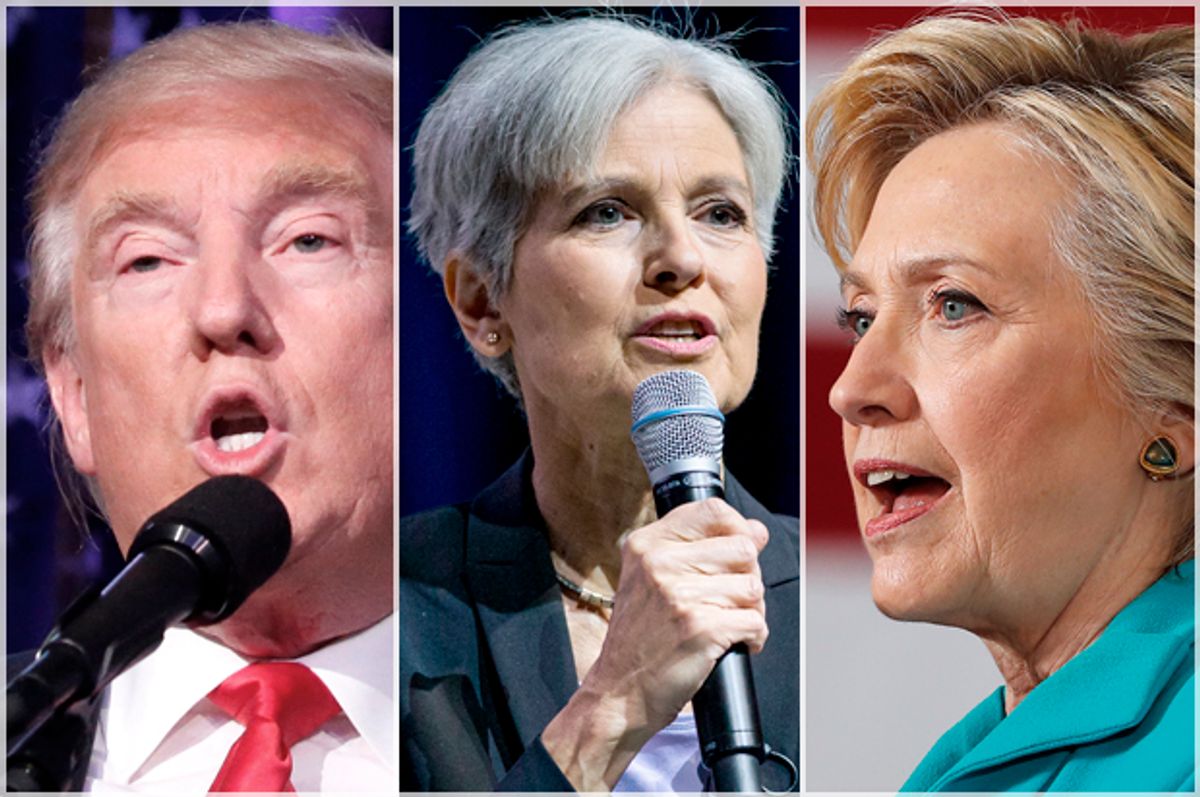 One thing I've learned from my infrequent forays into legal gambling is that no matter how rational a person might imagine herself to be, it's damn near impossible not to fall into superstitious behaviors when you belly up to a craps table.

Watching otherwise sensible liberals grasping at increasingly tenuous straws, in the hopes of avoiding the admittedly unthinkable image of Donald Trump being sworn in as president on Jan. 21, reminds me of my own behavior at the craps table.

Over the holiday weekend, Jill Stein of the Green Party raised millions of dollars to fund a recount of the agonizingly close election tallies in Wisconsin, Pennsylvania and Michigan, three states narrowly won by Trump. This effort was apparently motivated by reports that a group of computer scientists and voting-rights lawyers had reached out to Hillary Clinton's campaign with concerns that voting machines might have been hacked. It is worth noting that the Clinton campaign is skeptical of these claims and is only participating because the recounts are already underway.

The important thing to remember is that there are claims of hacking and voter fraud after every major election. Republicans, in fact, have been stoking fears about voter fraud for years now. Among Democrats, the fears tend to flare up around elections, and they tend to focus on claims that the voting machines are being illegally manipulated.

For both Democrats and Republicans, these conspiracy theories are comforting because they shore up their side's deeply felt belief that their views are the winning ones and that the only possible way the opposition could prevail is by cheating.

But this election was a unique one that guaranteed that Democratic concerns about hacked machines were going to be even more pronounced.

For one thing, Clinton actually won the popular vote, by a margin of 2.2 million and counting. So only the built-in structural anomalies of the Electoral College allowed Trump to win anyway.

Then there's the demonstrable problem of state-run voter fraud, that is, the various states that have passed onerous paperwork laws that make it difficult or impossible for certain voters to cast ballots. You get one guess which party such laws tend to favor.

On top of it all, there is compelling evidence that the Russian government was behind efforts to hack the email accounts of prominent Democrats, maybe in an effort to help Trump and perhaps to just stoke confusion and paranoia.

So yes, it's safe to say that Trump, with a big assist from the outdated institution of the Electoral College and the brand-new phenomenon of foreign hackers, did not win this election by means that most people would consider fair and square. But the way he did it is right out in the open, not lurking in the data of some Wisconsin voting machine.

It's unwise for Democrats to be put their time and energy and hopes into a recount effort that's almost certainly not going to reveal any evidence of secret, widespread fraud, much less flip the election to Hillary Clinton.

There's a real danger that voting machine paranoia will distract liberals from looking at the real reasons that Republicans have been able to grab a stranglehold on power in Washington, even though their agenda on economic issues, foreign policy and human rights is broadly unpopular. This has been going on for decades now, and Trump is just coasting into the White House on years of Republican efforts to undermine our democratic systems.

To begin with, Republicans have worked diligently and openly to kneecap the ability of traditionally Democratic constituencies to organize outside the party structure. Unions and community organizations help keep voters politically engaged beyond the campaign season — which leads to higher turnout, even during midterm elections. (Churches tend to play this role for Republicans and their activity is one reason that voter turnout for Republicans is more stable than for Democrats.)

Republicans know this and have spent decades undermining and destroying labor unions. Gov. Scott Walker's assaults on public sector unions in Wisconsin turned him into a cartoon villain, but these actions have paid off. Trump's victory there marks the first time the Badger State has gone for a Republican in a presidential race since President Ronald Reagan's re-election in 1984. (Reagan won 48 other states as well, in the biggest Electoral College wipeout of all time.)

Similarly, Republicans have mounted efforts to demonize and marginalize a wide array of nonprofit groups, from ACORN to Planned Parenthood and the Open Society Foundations. (These efforts destroyed ACORN.) It's not just that conservatives object to the social justice missions of these groups. They also know that organizing people around issues helps raise voter turnout, so crippling these organizations will almost certainly lead to fewer Democrats showing up at the polls.

Then, of course, there are the voter suppression efforts, which helped enough on the margins to squeak Trump over the line in the crucial states of Wisconsin, Florida and North Carolina. In Wisconsin, the number of people who were reportedly disenfranchised by the state's voter-ID law is 10 times greater than Trump's margin of victory.

Then there is media manipulation. Clinton's email "scandal" was anything but — no crimes were committed and no evidence of secret dirty dealings was revealed. But James Comey, the FBI's director, and his Republican allies were able to manipulate the inherent sexiness of rooting through someone's private correspondence to keep the story in the news, convincing the public there had to be some fire under all that smoke.

These are all problems that have solutions. Unfortunately, that solution is hard, painful work that will have lots of setbacks and frustrations. Liberals and leftists shocked by the result of this election need to organize and fundraise and fight. They need to rebuild the unions that Republicans have destroyed. They need to rebuild the community organizations that have been killed off and protect the ones that still exist.

They need to invest in a media environment that's about reporting actual news not delivering empty clickbait. They need to educate voters and hold media providers accountable. They need to care about the courts and the down-ballot races and the unsexy but necessary work of building a political infrastructure that works for them year-round, instead of tuning in only every four years for a presidential election.

Under the circumstances, it's easy to see why folks are pinning their hopes on the minuscule chance that Clinton will eke out a victory in the recount — in three different states. The only investment that requires is giving Jill Stein a few bucks and waiting a couple of weeks for the results. But playing craps in a casino — and betting your entire bankroll on a wildly unlikely outcome — is no substitute for obtaining an education and a job and working hard for decades to save money. Clinging to the faint hope that a last-minute miracle will save us from President Trump is no substitute for the real political organizing that can help defeat him and build a better future.