“Mr. Pig,” a wonderful road movie about family and transcendence, co-written and directed by Diego Luna 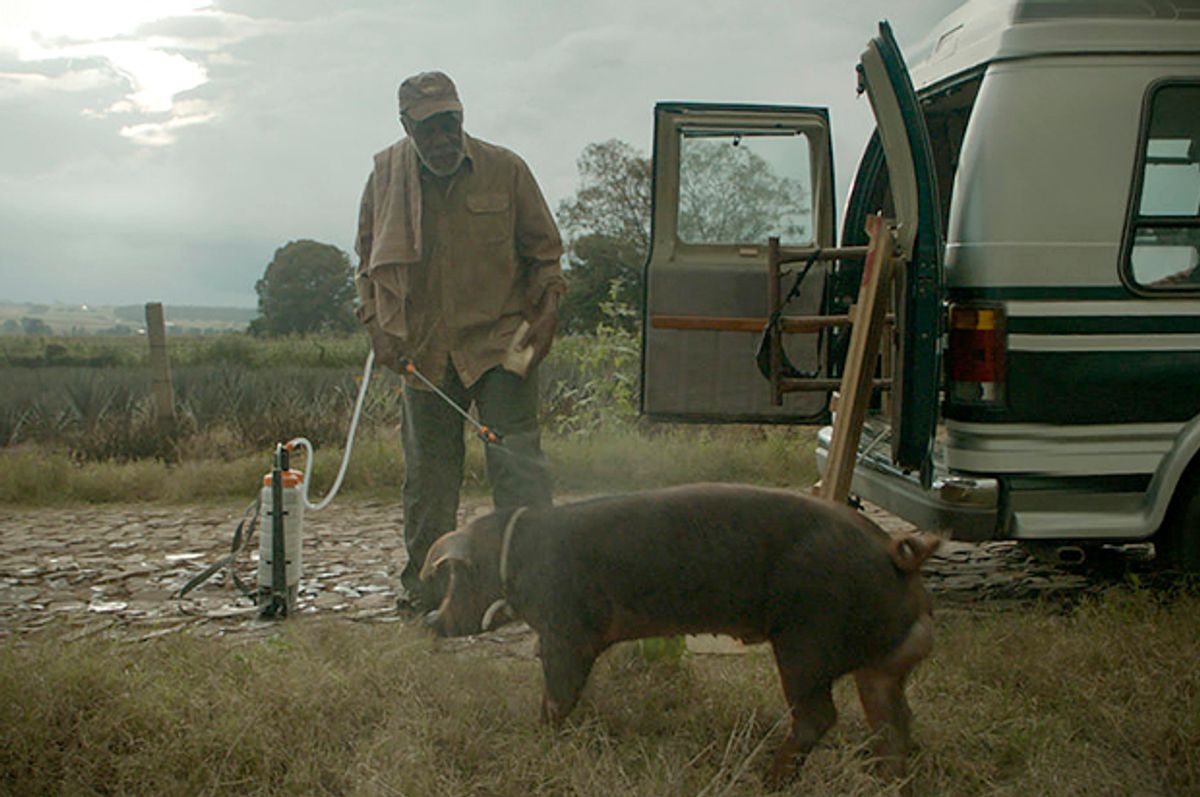 “Mr. Pig,” directed and co-written by Diego Luna, of “Y Tu Mamá También” fame, is an unassuming gem. Currently unspooling as part of the “Hola Mexico Film Festival,” a traveling series, it will be released on DVD in January.

The film stars Danny Glover as Ambrose, a 75-year-old farmer who heads from California to Jalisco, Mexico, to sell Howard, his prized pig. He wants to give the money to his daughter, Eunice (Maya Rudolph), as he has not been a very good father to her. When Eunice arrives in Mexico to help her father on his journey, they rehash their troubled past and try to find a way of moving forward for the future.

Luna’s film may have a familiar storyline of father-daughter bonding on a road trip — and admittedly, there are contrivances along the way — but the young filmmaker coaxes terrific performances from both Glover and Rudolph, and the film’s messages about aging, tradition and letting go resonate. “Mr. Pig” is a quietly powerful drama, filled with wry observations on life and family.

The actor turned filmmaker chatted with Salon about hogs, Mexico and parenting.

Diego, what did you know about raising, farming and caring medically for hogs?!

I didn’t know much [about pig farming] when I started writing. The idea about a pig farmer came to me a long time ago when I was making the film “Abel.” I was talking to Augusto Mendoza [who co-wrote “Abel” with Luna] about finding something new to do. I don’t know who said it, but we said, “Mr. Pig.”

So we wanted to do a full-on comedy about a pig farmer who had the perfect setting to raise a pig and was going to Mexico [to sell the pig at] a pig farm. And then we started describing this character and talking about our parents. Augusto’s father passed away while we were writing, so we stopped.

When I came back to work on the script, I gave Augusto a call to talk about our fathers and parents in a more mature moment in their lives — parents who need their kids to take care of them. We traveled to pig farms and did research, and it was shocking to see how the pigs were raised. It was clear we would have a good chance to comment on that and how little we think about what happens to a pig that gets to our table.

I also wanted to comment on the absence of pleasure in the life of the pigs that we eat. We talked about pig farming in a much more respectful way.

How much did Howard the pig weigh?

He grew fast. When we started shooting he was around 120 kilos, and now he’s like 200! He was already a big pig. I had this weird image in my head of a farmer walking with a gigantic pig who is not pink but is his best friend and behaves like a pet.

Although the film is set almost entirely in Mexico, most of the dialogue is in English, and the main character is a 75-year-old African-American man. What prompted you to write and direct this particular story?

I was trying to do a full-on comedy. We wanted to make a love letter to our parents. It was about the idea of migration, from the other way around — an American going to Mexico to find freedom he can’t find in the States. I think that’s still there . . . even though it’s more a drama with humor. I liked the idea of this guy going to Mexico and having to bribe an officer to get the pig into the country.

Another thing that was important for me in making this journey was that the film is a love letter to Mexico. I like traveling around my country with the perspective of an American. You need to see your reality through the eyes of someone else to acknowledge and understand what you have.

Howard can be seen as a symbol in the film. What does Howard represent to you? Or does he need to be anything other than a pig?

That pig represents the love Ambrose couldn’t give his daughter. He has a second chance with her. He represents all that love he had but did not give. He relates better to animals than humans. Howard also represents the love that just exists for Ambrose; it’s what Eunice needs to see in order to forgive him. She understands that he is someone who also experienced the distance between them. She’s not alone. In the end, the pig represents the energy and spirit of Ambrose. He gets to an idealistic place through his pig.

The father-daughter bond in the movie is very affecting. What observations do you have about family and the relationship between the characters?

I have kids — a daughter and a son. I’m making a film about what matters to me and my relationship with my own father. I understand every second matters. I like that I can share my experience as a father with my father. It’s interesting to see the way he approached my education and the way I approach my kids’ [education].

I’m always comparing my choices with his. That’s what the film is about. I’m the character of the daughter. In the beginning you think it’s a road trip between a pig and old man, and when Eunice comes in, she’s the conscience. She’s ready to leave everything behind and think about forgiveness. I wanted my father to see the film and hope he gets the message.