The NRA is getting ambitious now that Donald Trump has won: "This is our historic moment to go on offense"

The NRA helped Donald Trump get elected and has a wish list: guns everywhere 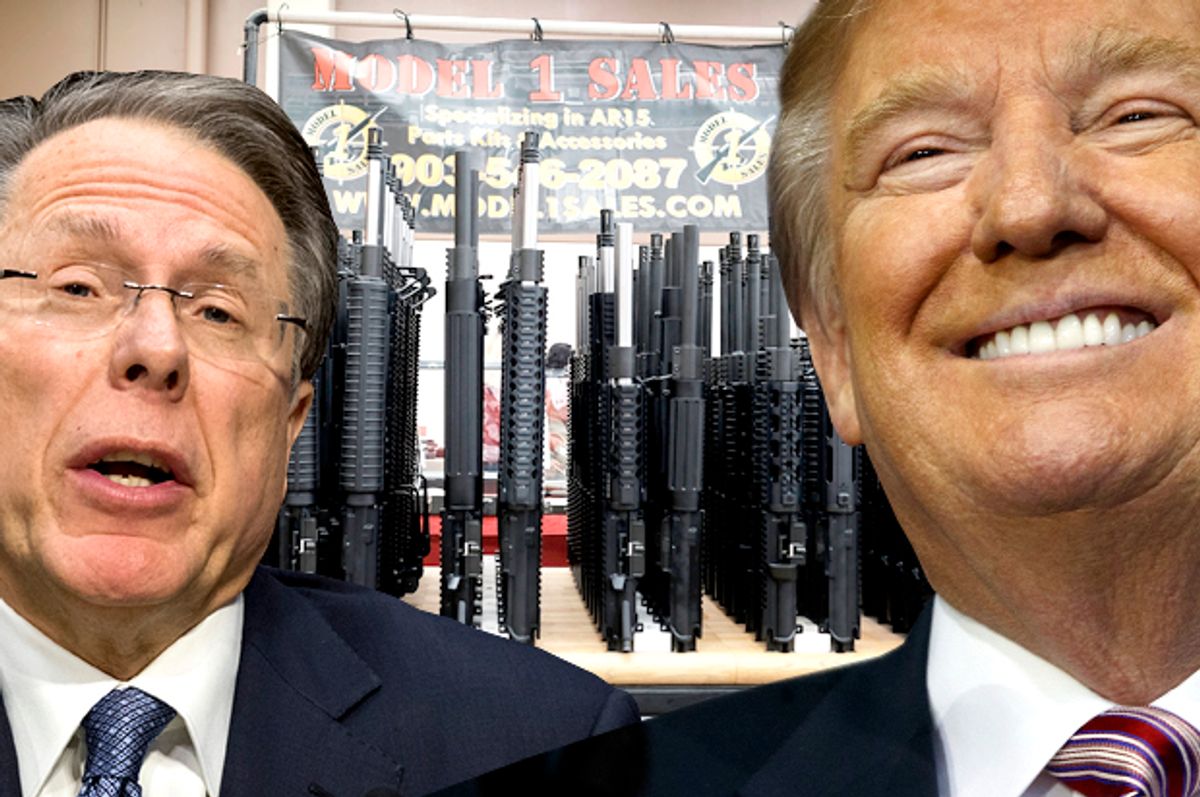 After spending $30 million in ads to prop up Donald Trump's presidential campaign, the National Rifle Association is now planning to get a return on its investment.

“This is our historic moment to go on offense,” NRA CEO Wayne LaPierre told members in a postelection video address, The Guardian reported on Monday.

LaPierre also vowed that he would work to reverse the "tyrannical erosion of gun rights" and denounced states with tight gun control laws as having “deceitful web of gun bans, ammo bans, magazine bans, exorbitant fees and taxes and registration schemes."

The NRA is pushing for a federal law that would validate states' gun-carrying permits regardless of state lines. This means that California — which requires gun owners to take a written test to obtain a firearm safety certificate — would be powerless to enforce laws against someone from Kansas, which lets people carry a concealed weapon even if he or she doesn't have a permit or training, according to the Law Center to Prevent Gun Violence.

“The NRA is going to organize gun owners to descend en masse in places like New York City," predicted Adam Winkler, a University of California Los Angeles law professor and gun politics expert, in an interview with The Guardian. “I wouldn’t be surprised to see a lot more very bold, aggressive, in-your-face political actions by gun rights activists."

Just before the election, the NRA released an ad describing a gunless "post-freedom America" without Donald Trump.

The Guardian piece also discussed how the NRA will push for an end to gun-free zones, quoting LaPierre as saying that "not one more American serviceman or woman should be murdered on a military base because the government denied their right to defend themselves with a firearm."

While it is unclear whether Trump will go along with these more radical steps, the president-elect did promise during his campaign to undo President Barack Obama's executive actions on gun control. He could also eliminate gun-free zones in schools, loosen restrictions on weapons like gun silencers and put the final nail in the coffin for universal background checks.

In the meantime, pro-gun activists are continuing to celebrate Trump's victory.

“Smart politicians all across the country are realizing that if we don’t play ball with the Second Amendment we will find ourselves unemployed,” Aaron Dorr, executive director of Iowa Gun Owners, told The New York Times on Tuesday.

“We’ve been threatened. We’ve been bullied. We’ve been ridiculed for eight years,” said Alice Tripp, legislative director of the Texas State Rifle Association (an affiliate of the NRA) to The New York Times on Tuesday. “I expect the tone to change. If tone sets policy, then we’ve got it made.”