Sen. Cory Booker has called for a DOJ investigation, while Rep. Tulsi Gabbard plans to join the protest 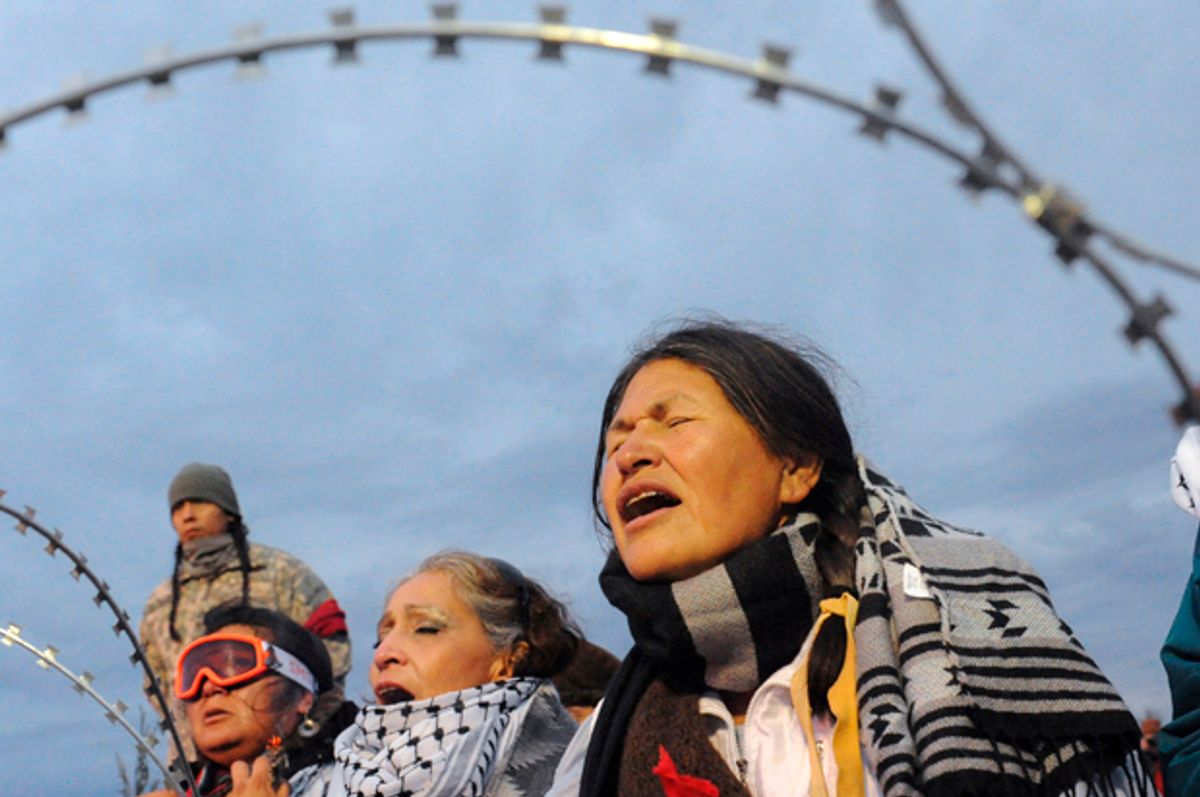 With the presidential election fading in the rearview mirror, some mainstream media attention has finally been diverted away from the Donald Trump circus to other notable but neglected news stories -- leading to much needed, and in some cases unwanted, national attention.

Just as the Army Corps of Engineers has ordered the Standing Rock Sioux Tribe to vacate the federal land they've occupied in North Dakota within days, the protests to protect tribal land and a vital water resource has garnered the attention of several high-profile Democratic members of Congress.

In a letter sent to Attorney General Loretta Lynch late last week, Sen. Cory Booker of New Jersey called on the Department of Justice to open an investigation into the tactics used by police against peaceful protesters (who have designated themselves "water protectors") and to deploy federal monitors to Standing Rock as reports emerge of violence against protesters.

Booker cited “ongoing danger to both protesters and law enforcement,” at the sites of ongoing protests against the Dakota Access Pipeline, which indigenous protesters and their allies believe could contaminate the Missouri River, and desecrate sacred tribal sites.

Last week, as the nation prepared to celebrate the Thanksgiving holiday, police used water cannons and rubber bullets on people attempting to halt the pipeline's construction.

Booker's letter urged the DOJ to investigate “all credible reports of inappropriate police tactics … and send federal monitors to Standing Rock to ensure that protesters can peacefully assemble and exercise their First Amendment rights.”

The New Jersey Democrat's letter comes after Sen. Al Franken, D-Minn., sent a letter to Lynch expressing a similar sentiment ahead of the Thanksgiving holiday.

“Video of the incident appears to show that the water cannons were not simply being used for fire control, or even crowd control, but were often directed at small crowds or even individual protesters. Combined with the onset of wintry weather, water cannons are extremely dangerous and potentially lethal weapons, and I urge you to investigate their use on protesters,” Franken wrote on November 21. “Native American populations have struggled for decades under the complex burden of historical trauma, and I have witnessed and admired how these communities have turned to their cultural foundations to build strength against that burden. These tactics against protesters exercising their Constitutional rights threaten to add another layer of trauma to these communities. I urge you to do everything in your power to prevent further escalation of violence.”

Still, other members of the Senate remain vocally opposed to the presence of protests on federal lands -- including the senators who theoretically represent many of the water protectors at Standing Rock.

Sen. Heidi Heitkamp of North Dakota, also a Democrat, praised the Army Corps of Engineers' order to break up a protest site as “a needed step to support the safety of residents, workers, protesters and law enforcement" in a recent statement. “Safety must remain the top priority for everyone, and to help make that possible, it’s critical protestors peacefully and lawfully move off of the Corps land north of the Cannonball River and to the identified federal and tribal lands," Heitkamp said.

Sen. John Hoeven, a Republican who is North Dakota's senior senator, echoed his Democratic colleague's sentiment in a statement Friday.

“The well-being and property of ranchers, farmers and everyone else living in the region should not be threatened by protesters who are willing to commit acts of violence,” Hoeven said.

In Congress' lower chamber, however, water protectors at Standing Rock have received notable support from many Democrats..

In September, Rep. Mike Honda of California, a member of the Congressional Asian Pacific American Caucus, pledged his solidarity with the Standing Rock Sioux Tribe in a Medium post.

"It is wrong that the Army Corps of Engineers violated the federal trust responsibility by approving construction without meaningful tribal consultation," Honda wrote. "Construction must be halted so the Tribe can continue to fight to protect its waters and sacred places. Respect for Tribal sovereignty requires so."

Honda's post was quickly followed up by a visit to Standing Rock by Rep. Raul Ruiz, a fellow California Democrat.

Ruiz, a member of the Congressional Hispanic Caucus and the highest-ranking Democrat on the House Natural Resources Committee’s Indian, Insular and Alaska Native Affairs Subcommittee, visited the site of the proposed 1,168-mile-long Dakota Access Pipeline in September. Then he and Rep. Raúl Grijalva, D-Ariz., ranking member of the House Natural Resources Committee ranking member, called for a larger hearing on the matter.

“If this pipeline was too much of a contamination risk for clean waters in the northern route, why would they consider it OK now to put it near Native Americans and their waterways?” Ruiz asked in September.

Grijalva followed up with a letter to the White House calling on President Obama to halt construction of the pipeline. The September letter was signed by other leading progressive Democrats, including Rep. Barbara Lee of California, who has led both the Congressional Black Caucus and the House Progressive Caucus, and Rep. Tulsi Gabbard of Hawaii, a former Democratic National Committee member.

I stand with the Standing Rock Sioux Tribe and oppose the Dakota Access Oil Pipeline. #NoDAPL

Gabbard is set to join hundreds of veterans in a protest at Standing Rock the day before the Army Corps scheduled eviction of protesters from the site.

“Next weekend, the congresswoman will be joining thousands of veterans from across the country to stand in solidarity with the Standing Rock Sioux in North Dakota who are protesting the construction of the Dakota Access Pipeline through their tribal lands, with grave concerns about the contamination of their major water source,” Gabbard’s Press Secretary Emily Latimer told the Observer Monday.

This additional attention from Congress comes as thousands of reportedly unwanted people flock to North Dakota to aid the Standing Rock Sioux Tribe.

"White people are colonizing the camps," water protector Alicia Smith recently complained in a Facebook post. "These people are treating it like it is Burning Man or The Rainbow Gathering and I even witnessed several wandering in and out of camps comparing it to those festivals," she said in remarks first reported by The Independent.

A local deputy who asked to remain anonymous told WDAY-AM that most of the protesters are white, and that some have used racial slurs against black, Hispanic and Native American officers.