Everything old is new again: Philip Guston’s cartoons of Dick Nixon on display at Hauser & Wirth gallery give cold comfort 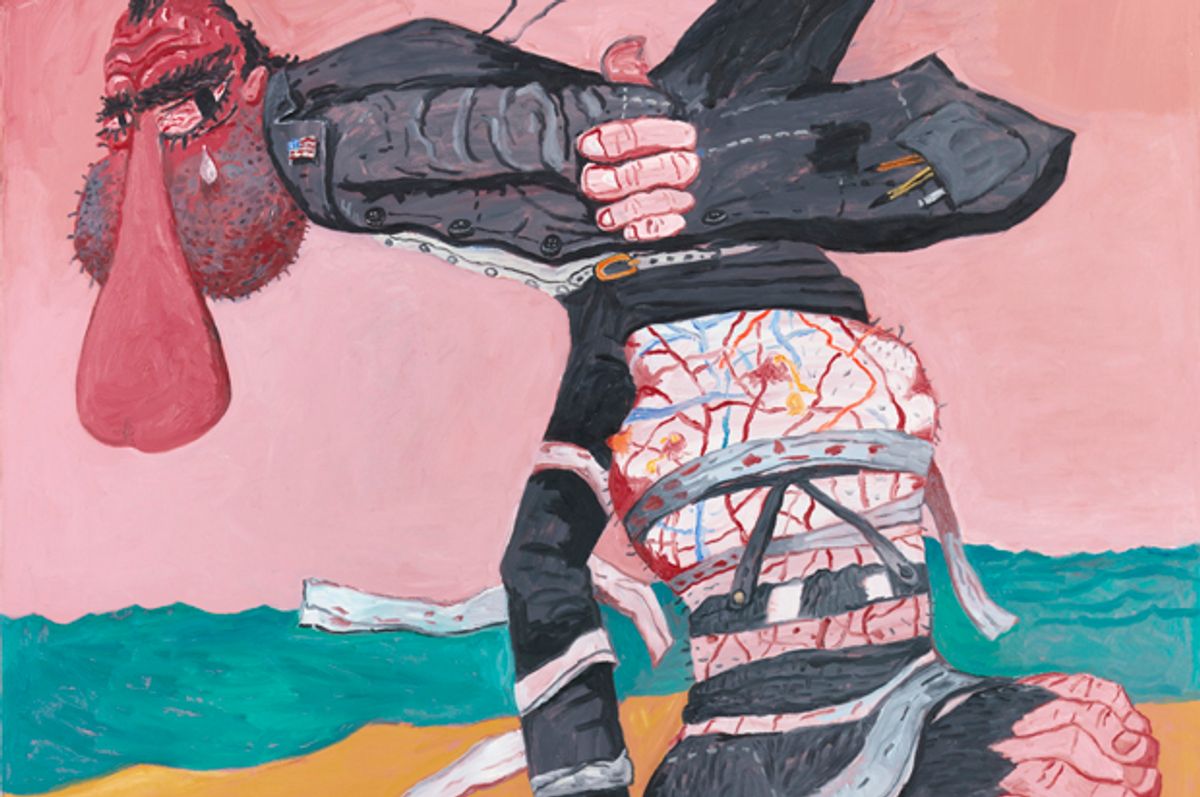 It is at once funny, frightening and perversely comforting to see Richard Nixon rendered with a phallus for a nose. This might not always be the case. But today, at least as far as the late Philip Guston’s 170-plus cartoon depictions of Dick Nixon (on display at New York City's Hauser & Wirth gallery through Jan. 14) are concerned, it is.

Most of Guston’s cartoons were produced during a monthlong frenzy in the summer of 1971. Guston was living in Woodstock, New York, at the time, taking refuge from an art world that had scorned his recent stylistic shift from abstraction to figurative work. (New York Times art critic Hilton Kramer notoriously deemed him “A Mandarin Pretending to Be a Stumblebum.”)

Though Guston was removed from the art world, he wasn’t solitary. He would regularly get together with his friend, the writer Philip Roth, who had also retreated to Woodstock following the publication of his sexually out-there novel “Portnoy’s Complaint.” And together, they would compulsively share their contempt for the sitting president.

“Roth remembers that he and Guston spoke about Nixon ‘not in any analytic way,’ but in terms of an ‘exuberance’ for a reviled figure who Roth observed seemed like a comic invention of Moliere,” wrote Debra Bricker Balken in her 2001 book, “Philip Guston's Poor Richard.” “They were both transfixed, as [Roth] described, by the ‘Uriah Heepisms and Tartuffisms of our presiding President,’ someone who unwittingly opened himself up to mimicry and caricature.” Their shared obsession led Roth to write the first few chapters of what would become the satirical novel “Our Gang” and publish them in The New York Review of Books. And Roth’s writing inspired Guston’s manic month of cartooning.

The cartoons are compositionally simple line drawings (black and white, captionless). If not for their graphic quality, they wouldn’t look out of place in The New Yorker. They portray various farcical moments in Nixon’s life, beginning in Whittier, California, with a young Nixon fantasizing about his future, span his campaign and his presidency and culminate with the projection that Nixon would be remembered as nothing more than a “Nixon Cookie.” Together, they form a satirical narrative, “Poor Richard,” that pokes fun at Nixon’s ruthless ambition, dishonesty and hypocrisy.

The humor lies in the images’ specificity — oh, and, you know, the anatomical insinuation. Nixon, who served as Dwight Eisenhower’s vice president from 1953 to 1961 and ran an unsuccessful presidential bid in 1960, had been a prominent conservative politician for decades by the time of his 1968 presidential victory. Watergate has become his legacy, but his faults, both the physical and those of disposition, were abundantly apparent to liberal detractors even before he took office.

It’s not hard to find columns and letters to the editor from the time that warned of the dangers Nixon posed. “Nixon is one of the chief architects of his party's decline in public confidence — he exemplifies its failure in creative, courageous leadership, able and willing to grapple with the problems of an open society in the 20th century,” one such New York Times letter to the editor from 1968 read in response to the prospect of Nixon’s nomination. Besides giving Nixon a phallic nose, which, like Pinocchio, grows as Nixon lies, Guston presents Nixon as a grubby con man, with five o’clock shadow and shabby suits, cynically endearing himself to voters he doesn’t care about — hippies, the elderly, African-Americans.

Even distilled to little more than jowls, a widow’s peak and a schnoz, the characterization looks unmistakably like Richard Nixon. And yet in the aftermath of the 2016 election, it’s hard not to see the contemporary president-elect in Guston’s depiction. Guston’s Nixon is a babbling blowhard who suffers under the weight of his own ambition. The opening images in the series borrow a line from Nixon’s Republican National Convention acceptance speech (“He hears the train go by at night and he dreams of faraway places where he'd like to go. It seems like an impossible dream.”) to satirize Nixon’s self-mythologizing.

The story begins with a train rumbling through Southern California, the quote “It seems like an impossible dream” bubbling in the clouds; then only a few cartoons further into the narrative the once innocent Nixon has his nose up and inside the celebrity evangelist preacher Billy Graham; and later, he and his confidants then vice president Spiro Agnew and attorney general John Mitchell are donning Ku Klux Klan robes. His holy conception of himself doesn’t match his nefarious actions.

The circumstances are different today, but the dishonesty and hypocrisy are of the same breed. Despite having built his fortune from a mighty inheritance, Trump has framed himself as a self-made man. "I've always been good at making money," he has often bragged. He fashions himself a populist champion of middle America’s coal miners, but has made a career, in Manhattan, preying on society’s most vulnerable people. Trump, like Nixon, is an adroit dissembler and in that way an incredible target for satire.

Where Guston captured Nixon yelling through a television, it’s easy to imagine Trump furiously tweeting. Where Guston depicted Nixon promoting an ambitious diplomatic trip to China, it’s easy to imagine Trump promoting a YUGE wall. And where Guston imagines Nixon, Spiro Agnew and John Mitchell wearing KKK garb, well, the figures are nondescript enough that they could easily be Trump, Mike Pence and Steve Bannon under the robes.

The spookiness of the parallels is heightened by a tangential connection between the two men. During Nixon’s post-presidential life, he and Trump would occasionally write each other letters. In 1987, Nixon wrote Trump a note of congratulations following Trump’s appearance on the “Phil Donahue Show.” "I did not see the program, but Mrs. Nixon told me that you were great," Nixon wrote. "As you can imagine, she is an expert on politics and she predicts whenever you decide to run for office you will be a winner!"

Pat Nixon proved to be prescient. Her prophecy was fulfilled in part because Trump mimicked some of her husband’s 1968 campaign tactics, including his fearmongering, stark law-and-order remedies and opposition to an overreaching government: He even co-opted the phrase “silent majority.”

“I think what Nixon understood is that when the world is falling apart, people want a strong leader whose highest priority is protecting America first,” Trump said this past spring. “The ’60s were bad, really bad. And it’s really bad now. Americans feel like it’s chaos again.”

Of course, Nixon only heightened the chaos of the 1960s. Rather than putting a swift end to the Vietnam War as he had promised during his campaign, Nixon undermined peace negotiations that were in the works between Lyndon B. Johnson’s administration and South Vietnam president Nguyễn Văn Thiệu. Upon taking office, he expanded the war. Then there was Watergate.

Here, it bears repeating the Guston made “Poor Richard” in 1971 before the ensuing scandal. The cartoons weren’t shown publicly until 2001 when some of them were published in Bricker Balken’s book and unveiled in a Massachusetts Museum of Contemporary Art exhibition. Though their content is subversive, they did not affect public discourse or interpretation of Nixon during his presidency or even during his life. Rather, they are a historical time capsule.

In them, Guston was not satirizing Nixon’s acts and misdeeds so much as he was satirizing Nixon’s flaws of character. It was those flaws of character that eventually led to the abuse of power and disorder that came to define Nixon and his administration. In Trump, Bricker Balken told me she sees Nixon’s mendacity and hypocrisy redoubled. The prospect of what that might mean for America, and the world more broadly, is terrifying.

And yet paradoxically, “Poor Richard” also powerfully serves as a sedative. By presenting Nixon as so thoroughly irregular, the cartoons give American a precedent to Trump. Looked at from a certain angle, Nixon’s story has a happy ending: America’s safeguards proved to be more powerful than any one dickhead.