Fake news is modern propaganda: In the Trump era, history repeats itself not as farce but as clickbait

It is propaganda from sources outside and inside America, why do we call it fake news? 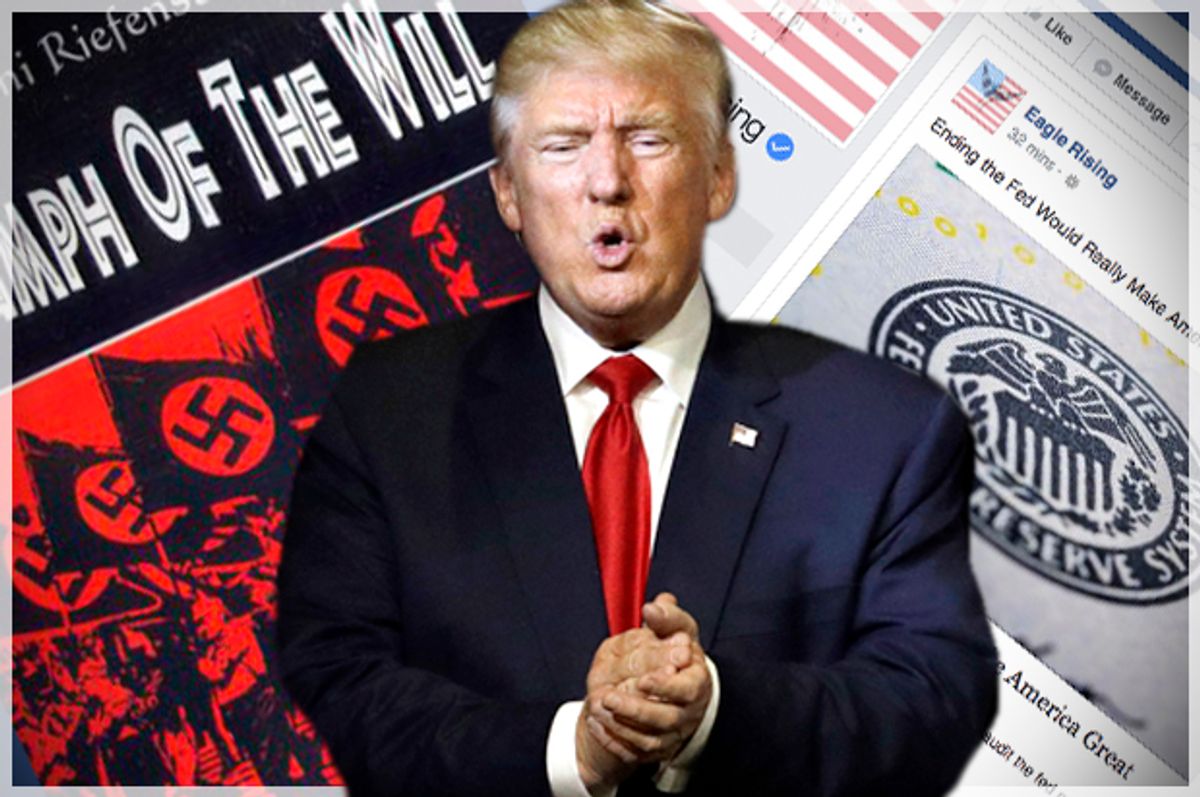 A new article published in The Washington Post alleges that Russia was involved in disseminating fake news designed to get Donald Trump elected.

The article was based on research from two sources: One report, titled “Trolling for Trump: How Russia Is Trying to Destroy Our Democracy,” was published in War on the Rocks, an online journal focusing on matters of foreign policy and national security. The other was courtesy of PropOrNot, a nonpartisan research group. Each came to the same conclusion — that Russian officials deployed a mixture of spambots and human agents to generate and spread false information that would be favorable to the Republican Party.

These tactics proved extraordinarily effective throughout the 2016 election, according to PropOrNot. The group claims that fake stories created by Russian interests were shared more than 213 million times during the race.

You should have every reason to take these findings with a grain of salt. No less than Glenn Greenwald questioned PropOrNot’s transparency in a post for The Intercept, given that the group has yet to disclose who exactly is a part of its “nonpartisan” leadership. Even the group’s executive director asked to remain anonymous in The Washington Post report, citing fear of being targeted by Russian trolls. Tellingly, the outlet has reported that a number of media organizations “passed on this story” before The Washington Post picked it up.

Despite this valid criticism, there’s one important takeaway from these reports. The problem of fake news is more than simply an issue of false or shoddy reporting, a controversy that Facebook has recently found itself at the center of following insider information that the company did little to stop the spread of such stories, for fear the platform would appear biased against conservatives. This is about a targeted campaign of “disinformation,” as the Soviet Union used to call it, influencing the U.S. political system.

Calling it fake news hides the truth of what this phenomenon truly is — propaganda, designed to erode the foundations of democracy itself.

President Barack Obama warned about the powerful, dangerous effects of fake news during a press conference following Donald Trump’s surprise Electoral College victory. The president-elect upset pollsters who estimated that his challenger, former secretary of state Hillary Clinton, was leading by an average of 3 to 4 percentage points in polls in the days leading up to the election. Pundits have scrambled to explain Trump’s rise to power — with many pointing to the media as a powerful tool in stirring up hatred and racial division.

Obama claimed that partisanship in the name of journalism is the enemy of an informed public.

"If we are not serious about the facts and what's true and what's not, particularly in the social media era when so many get information from sound bites and snippets off their phone, if we can't discriminate between serious arguments and propaganda, then we have problems," said President Obama.

The Washington Post wasn’t the first to point out that politically motivated interests are in the business of corking the bat for their preferred candidate.

An October study by BuzzFeed found that while there are fake news websites on both sides of the partisan divide, viral news hoaxes were twice as likely to be shilling for Trump than for Clinton. Sites that disseminate disinformation for the GOP include platforms like Eagle Rising and American News, with the latter commanding a Facebook audience of 5 million. That’s more social-media followers than respected websites like Vox, The Atlantic, Slate or the Los Angeles Times.

A recent American News story claimed that Michelle Obama criticized Melania Trump, saying that the former model doesn’t have the “credentials” to fill her shoes as the first lady. That report isn’t true, but it didn’t stop the article from receiving more than 6,000 likes, just on the Republican outlet’s Facebook page. (Curiously, the original publication date was last year, despite references to Trump as the “president-elect.”)

Freedom Daily, which boasts more than 1 million followers, pushed a fake story about Black Lives Matter activists beating up a white man and dousing him with gasoline. On Sunday, Eagle Rising shared a meme of a Peanuts cartoon in which Linus tells Charlie Brown, “Under President Trump, it will be safe to say ‘Merry Christmas’ again.”

Platforms like these, while a product of the digital age, are not exclusive to present day. Throughout history of propaganda, news outlets have been used not to combat propaganda but as tools to further its reach. During the Third Reich, Adolf Hitler controlled the production of radio, television and film in Germany, creating stylized films with Leni Riefenstahl to illustrate the power and the glory of his empire. In order to stay in business, newspapers were effectively a megaphone for the Nazi Party.

Even the venerated Associated Press found itself in the position of being forced to work with Hitler if it wanted access to the German leader.

Historian Harriet Scharnberg, a professor at Martin Luther University in Halle, Germany, reported that the AP was forced to collude with Hitler to avoid the fate of papers like The Guardian, which was shut down by the German government. A journal article published in Studies in Contemporary History claimed that the outlet was required to sign a “Schriftleitergesetz,” an “editor’s law” promising to not publish any material “calculated to weaken the strength of the Reich abroad or at home.”

In addition to hiring German propaganda officers, the outlet was also compelled to engage in self-censorship. The AP declined to publish photos of the countless Jewish victims murdered during a 1941 siege of the town of Lviv, then one of the largest cities in western Ukraine.

Scharnberg told The Guardian, “the American press was only supplied with photographs showing the victims of the Soviet police and ‘brute’ Red Army war criminals.”

She believes that Germany’s control of the media during World War II, whether it was creating “The Triumph of the Will” or forcing national newspapers to ignore the killings of millions of Jews, homosexuals and people with disabilities, was central to its ability to govern effectively. It allowed the Third Reich to “portray a war of extermination as a conventional war,” she said.

Fake news serves the same purpose in Trump’s America: normalizing the abnormal by legitimizing the president-elect’s stay in the White House.

For instance, a recent article in American News makes it appear as if Trump has a near universal mandate from the U.S. population. Published Sunday, the report claimed that recent polls by the Pew Research Center show that 96 percent of Americans feel “hopeful” about his impending presidency and adds that another 74 percent even feel “proud” of the reality star turned politician's election to office.

“The growing support comes after a tumultuous few weeks following a heated election,” the article asserted. “Now, it appears Americans are realizing that change can be a very good thing for our country.

The most recent findings from Pew actually show the exact opposite: Trump will enter the White House viewed less favorably than any candidate in recent history. Just 30 percent of voters scored the president-elect with an “A” or a “B” grade, as opposed to the 57 percent of Americans who gave Obama such marks four years ago. Even worse, he has scored less favorably than any of the losing candidates since the incumbent George H.W. Bush was defeated by Bill Clinton in 1992, as well as 13 points lower than Clinton.

What has changed about propaganda under Trump is not the tools used but its scale. While hundreds of newspapers were forced to become puppets for Hitler under Nazi Germany, now thousands of websites on the internet are reporting on the election.

Websites like Google and Facebook have either been unwilling to stop the spread of disinformation for fear of right-wing backlash or unable to tell the difference between what’s real and what’s a calculated fabrication. As The Washington Post has pointed out, the top result on Google’s search engine in the days following the election was a website claiming that Trump emerged victorious in the popular vote by a 700,000 ballot margin. In truth, according to current figures, Clinton leads in the popular vote by 2.2 million.

Viral hoaxes have been more effective at catching the readership’s attention than traditional news stories. BuzzFeed found that 54 percent of news stories that were clicked on, liked or shared on Facebook users’ news feeds during the election were propaganda cleverly disguised to look like the real thing.

That’s not just a forgery. In helping create leaders like Trump, digital propaganda is a threat to the future of our country, and it needs to be stopped before history repeats itself not as a farce but as clickbait.