Putin, Kim Jong-un or ISIS could test Trump in first 100 days: "There are very unpredictable and unstable people running countries" 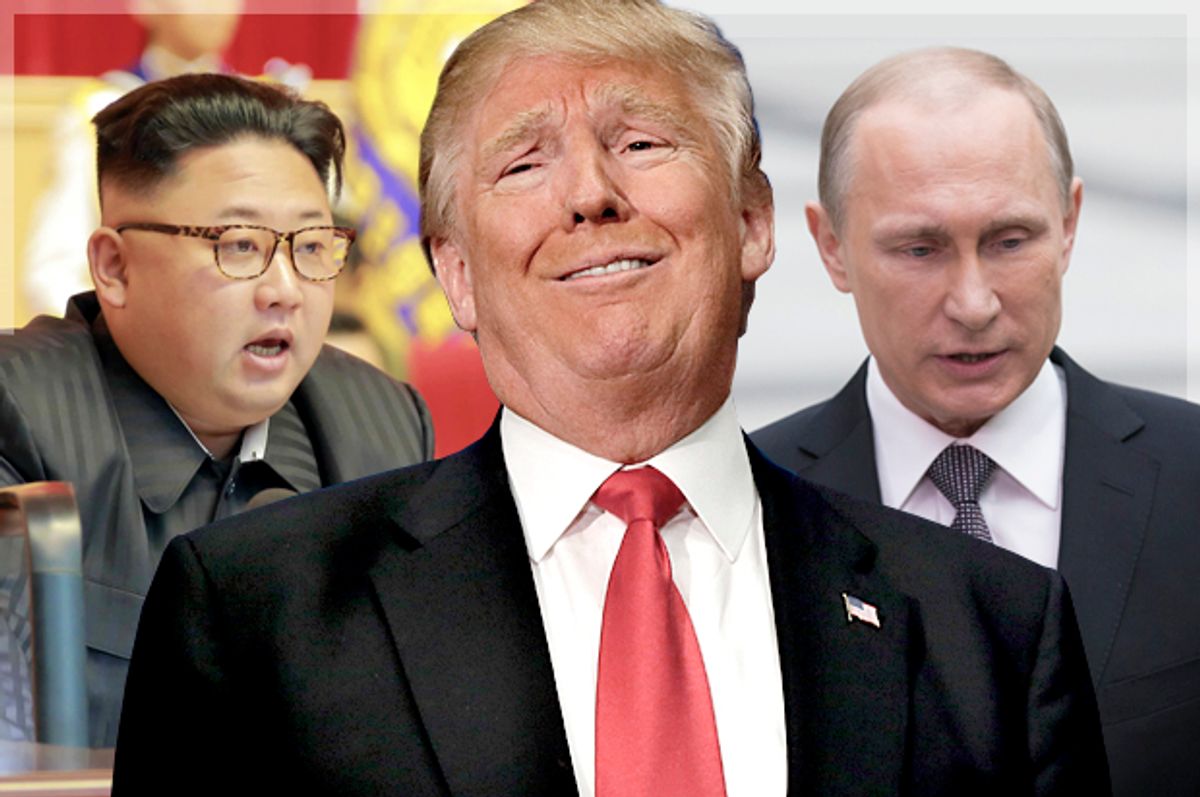 Though his liberal worldview may not have a platform in President-elect Donald Trump’s administration, Democratic statesman George Mitchell offered some pragmatic, nonpartisan advice in an interview yesterday: Before Trump meets with Russian President Vladimir Putin, he should first meet with our traditional European allies, especially those in NATO.

After rattling the foreign policy establishment (along with many grassroots and “establishment” conservatives) during his campaign, Trump would be smart to reassure world leaders, which preelection polls showed largely held a dim view of Trump, that he will indeed be a steady hand at the helm of the world’s sole superpower.

Many Trump voters agree with the president-elect that NATO countries should pony up their required percentage of GDP on defense. This is an entirely reasonable demand, and Trump should follow through on his campaign rhetoric: If he can, he would be more effective than his predecessors who wanted the same thing.

In an interview yesterday, Mitchell told me that whether it involves Putin, or Kim Jong-un in North Korea, or ISIS in the Middle East, he expects that within Trump’s first 100 days there could very well be some saber rattling on the part of a rogue regime or nonstate actors to test out the new tough-talking president.

“I think it is likely that will occur,” Mitchell said. "There are very unpredictable and unstable people running countries. . . . I don’t know what [Putin] might or might not do to provide an early test.”

Mitchell sagely assessed the threat that Putin poses to America — not by reviving the Cold War, but rather as an autocrat who cudgels a free press as he seeks to revive a regional hegemony with a shrinking petrostate economy too dependent on oil and gas.

“They face a massive budget deficit and a declining standard of living for most people," Mitchell said. "The population is declining, even as the proportion of the population that is Muslim is growing, creating internal problems for Putin. The United States economy is larger than $18 trillion dollars. The Russian economy isn’t even in the top 10 in the world — smaller than Canada, smaller than South Korea. The state of California has a GDP twice that of Russia. What Russia has is a massive nuclear arsenal, a disproportionately large military force.”

In defending his former boss President Barack Obama, Mitchell, a former special envoy to the Middle East, said that any American president would not have gone to war over Putin’s military takeover of Crimea. But Mitchell didn’t convince me that Putin would not have invaded Crimea in the first place under a president like Trump or someone else who was a stronger and more effective emissary of American might.

After all, the most common word to describe Trump’s appeal among his voters? Strength. Many people, myself included, believe that Obama has been a weak and ineffective guardian of American interests abroad in situations ranging from the flawed Iranian nuclear deal to ISIS and  China and more. Trump won with promises to restore the "America First" ideal. On an airplane, you first secure your own oxygen mask before helping others.

But Mitchell is correct in assessing that Putin is struggling with the reality that the people of Eastern Europe prefer strengthening ties with Western Europe over the former Soviet regime. Putin has lashed out as his power has declined, and neither Obama nor former secretary of state Hillary Clinton were able to offer the carrots or sticks to prevent further dysfunction.

Trump, of course, hasn’t either, but at least he’s got a blank slate to start with.

“Some argue we should not have extended NATO to the Russian borders, but tell that to the countries who live on Russian borders,” Mitchell said. “Balancing those interests is important. It’s challenging, but it is not by any means the major challenge that the United States and President Trump will confront over the next few years.”