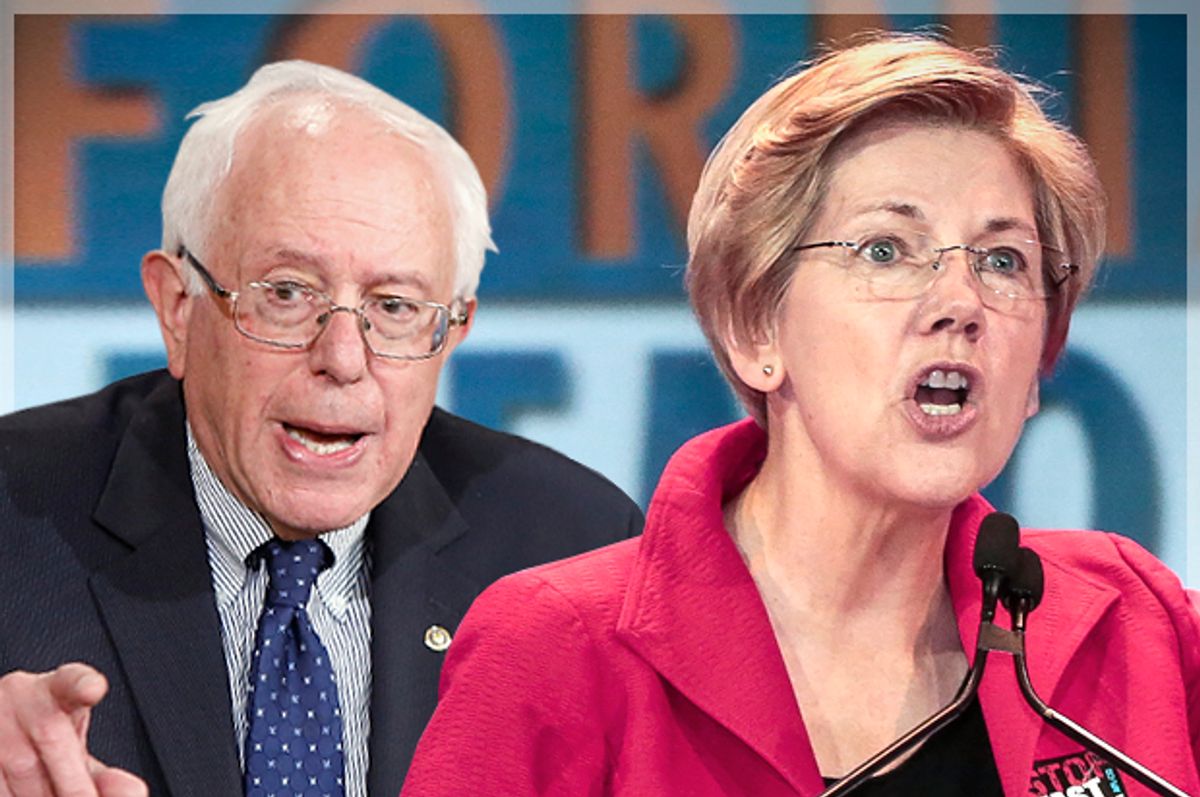 In the days following Donald Trump's stunning electoral victory, shell-shocked Democrats cried out in dismay at nearly every semblance of bipartisanship and goodwill offered by Democratic members of Congress to the President-elect. Would the party that managed to lose a presidential election to a blustery buffoon and lose legislative seats to a party solely committed to obstruction simply capitulate in defeat and immediately commence genuflecting to a demagogue?

“Let me be 100 percent clear about this: When President-elect Trump wants to take on these issues, when his goal is to increase the economic security of middle-class families, then count me in,” popular progressive Massachusetts Sen. Elizabeth Warren told the AFL-CIO days after Trump's election. "If Trump is ready to go on rebuilding economic security for millions of Americans, so am I, and so are a lot of other people — Democrats and Republicans,” she said.

“To the degree that Mr. Trump is serious about pursuing policies that improve the lives of working families in this country, I and other progressives are prepared to work with him,” said Vermont Sen. Bernie Sanders at the time, echoing Warren's sentiments, before adding, “To the degree that he pursues racist, sexist, xenophobic and anti-environment policies, we will vigorously oppose him.”

Now that Trump has made good on his campaign rhetoric with similarly divisive selections for his cabinet, while also breaking his campaign pledge to "drain the swamp," the Senate's two leading progressives are again singing from the same sheet -- this time in clear opposition to the president-elect.

Sanders and Warren joined forces Tuesday to slam Trump's selection of "foreclosure machine" Steve Mnuchin as the next potential secretary of the Treasury.

In a rare joint statement, the two Democratic heavyweights blasted Trump’s pick of the Goldman Sachs executive, arguing it proves Trump’s vow to “drain the swamp” in Washington was just talk.

“During the campaign, Donald Trump told the American people that he was going to change Washington by taking on Wall Street. Donald Trump’s choice for Treasury secretary, Steve Mnuchin, is just another Wall Street insider,” Warren and Sanders wrote. “That is not the type of change that Donald Trump promised to bring to Washington — that is hypocrisy at its worst.”

Warren, who rose to national prominence due to her criticism of Wall Street, had earlier issued a blistering statement outlining just how contrary Trump's choice of Mnuchin is to his campaign rhetoric of fighting for Main Street.

“Steve Mnuchin is the Forrest Gump of the financial crisis — he managed to participate in all the worst practices on Wall Street,” Warren said in a statement on Tuesday night. “He spent two decades at Goldman Sachs helping the bank peddle the same kind of mortgage products that blew up the economy and sucked down billions in taxpayer bailout money before he moved on to run a bank that was infamous for aggressively foreclosing on families.”

Warren's criticism of Mnuchin follows her letter to the Government Accountability Office last week, asking the agency to investigate whether or not the president-elect has already used his position for private gain as the leader of the Trump Organization.

And the increased scrutiny on Trump from Congress isn't just coming from senators on the progressive left.

Every House Democrat on the Judiciary Committee signed a letter calling for hearings into Trump's potential business conflicts on Wednesday. The 16 members called on Republican chair Rep. Bob Goodlatte "to examine federal conflicts of interest and ethics provisions that may apply to the President of the United States."

That letter comes only one day after 17 Democratic members of the House Oversight and Government Reform Committee called on Republican chair Rep. Jason Chaffetz to “begin reviewing [Trump’s] financial arrangements in order to identify and protect against conflicts of interest.”