Republicans were going to scourge Hillary Clinton over those emails, win or lose. Now they're telling us to chill 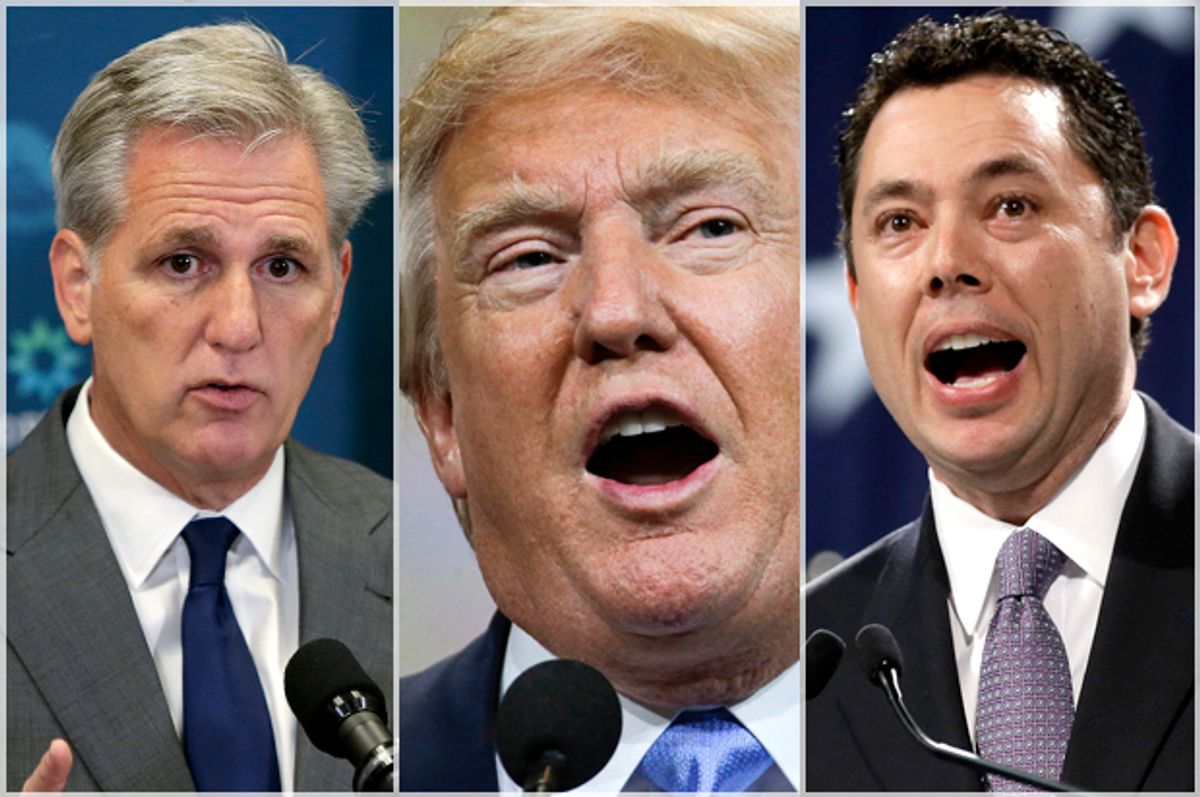 When last we heard from Rep. Jason Chaffetz, the House of Representatives' own Samuel Sewell (Salem's famous witch hunter), he was declaring that just because Hillary Clinton had lost the election, her troubles were not over as far as he was concerned. He was undoubtedly disappointed that he was unable to pursue the impeachment hearings he had been planning for several months.

But Chaffetz gamely carried on and announced that he had every intention of continuing his investigation into her allegedly nefarious emails and conflicts of interest from when she was secretary of state. On the day after the election, the Utah congressman told the press:

It would be totally remiss of us to dismiss [the email investigation] because she’s not going to be president. I still have a duty and obligation to get to the truth about one of the largest breaches of security at the State Department. Tens of thousands of documents still have not been turned over to Congress.

He complained about current State Department officials being unwilling to go along and said that he believed the "Trump administration would be cooperative in getting these floodgates to open as they should.”

These investigations were to happen concurrently with the special prosecutor promised by Trump and at the time Chaffetz had every reason to believe that Trump would follow through. Since then the president-elect has told The New York Times that Clinton had suffered enough and he didn't want to "hurt her," without closing the door on further action should it become necessary.

Trump's informal adviser Newt Gingrich has apparently told him that a president should not foreclose the possibility of the Department of Justice from pursuing crimes as it sees fit, and Fox News' Greg Jarrett has wondered why Clinton had squandered her "get out of jail free card" by allowing her lawyers to observe the Wisconsin recount process (which Trump's lawyers are doing as well). Jarrett wrote this:

Clinton’s decision to embrace a challenge to Trump’s election is both confounding and inexplicable. Why would she chance angering the very individual who holds her fate in his hands? It’s like an inmate taunting a jailer. You’d have to be obtuse to do it.

Trump adviser Kellyanne Conway also hinted broadly that Trump's "magnanimous" attitude is contingent on Clinton's not saying anything that might anger him.

But this is the president-elect’s position right now and I would say he has been incredibly gracious and magnanimous to Secretary Clinton at a time when for whatever reason her folks are saying they will join in a recount to try to somehow undo the 70-plus electoral votes that he beat her by.

It looks as though this threat will hang over Clinton's head for a long time to come.

This all seems rather strange, doesn't it? There are much bigger fish to fry these days. Indeed, there is a Great White Whale out there by the name of Donald Trump, a man with so many conflicts of interest and potential national security transgressions it would be a full-time job for any congressional oversight committee to find out just what and where they all are.

The Huffington Post's Michael McAuliff asked House Majority Leader Kevin McCarthy about the growing clamor for congressional oversight of the incoming Trump administration. McCarthy seems to have heard very little about Trump's issues and had no grasp of the details. But he to have had an epiphany about using investigations for political purposes. He told McAuliff:

I think for too long, some of these rules have been used that way, and I think it’s been a bad thing, and it’s harmed the ability for people all to work together.

You'll recall that McCarthy lost his bid for the speakership when he went on TV last year and said:

When you look at poll numbers of Hillary Clinton, they have dropped. Unfavorables pretty high, because people say they don't trust her. They don't trust her because of what they found out about the server and everything else. Would you ever have found that out had you not gathered the information from the Benghazi select committee?

But what about Chaffetz, the man whose supposed commitment to the principle of congressional oversight led him to declare that he would chase Clinton to the ends of the earth? Surely a man of such integrity would never let partisanship interfere with his sacred duty to hold the powerful to account?

Well, it seems he isn't up on the details of the current controversy either. When Chaffetz was asked about it by The Huffington Post's Matt Fuller, he conflated the issue of the Secret Service's paying to rent space in Trump Tower with the news that foreign dignitaries are already trying to curry favor with Trump by spending big money at his new D.C. hotel. He said he thought there was ample precedent for all this, which came as a surprise to the ranking Democrat on the committee, Elijah Cummings, who said, “He’s operating 111 companies in 18 countries. Come on!”

And that's what we know about. His domestic conflicts, along with those of his children and his son-in-law are massive as well. Jason Chaffetz, relentless email stalker and enforcer of proper national security practices is remarkably relaxed about Donald Trump's overwhelmingly complicated ethical problems.  Why, if you didn't know better you might think that all of his pretentious grandstanding over the years was nothing more than political posturing.

There has never been a President more in need of oversight than the one who will be inaugurated in January. This train wreck of an administration could only be helped by adults in his party taking their responsibilities seriously and trying to keep it from running off the rails. From the looks of it, they have all decided to play dumb and behave as if what Trump and his entourage are doing is no big deal. It's a very big deal indeed. Congressional Republicans are doing their new president, and our country, no favors by concluding that they no longer have a job to do.