GOP's Obamacare trouble: "Repeal and replace" turns out to be tougher than it sounds

Kevin McCarthy wants to play a risky game with Obamacare repeal, using a political logic that has repeatedy failed 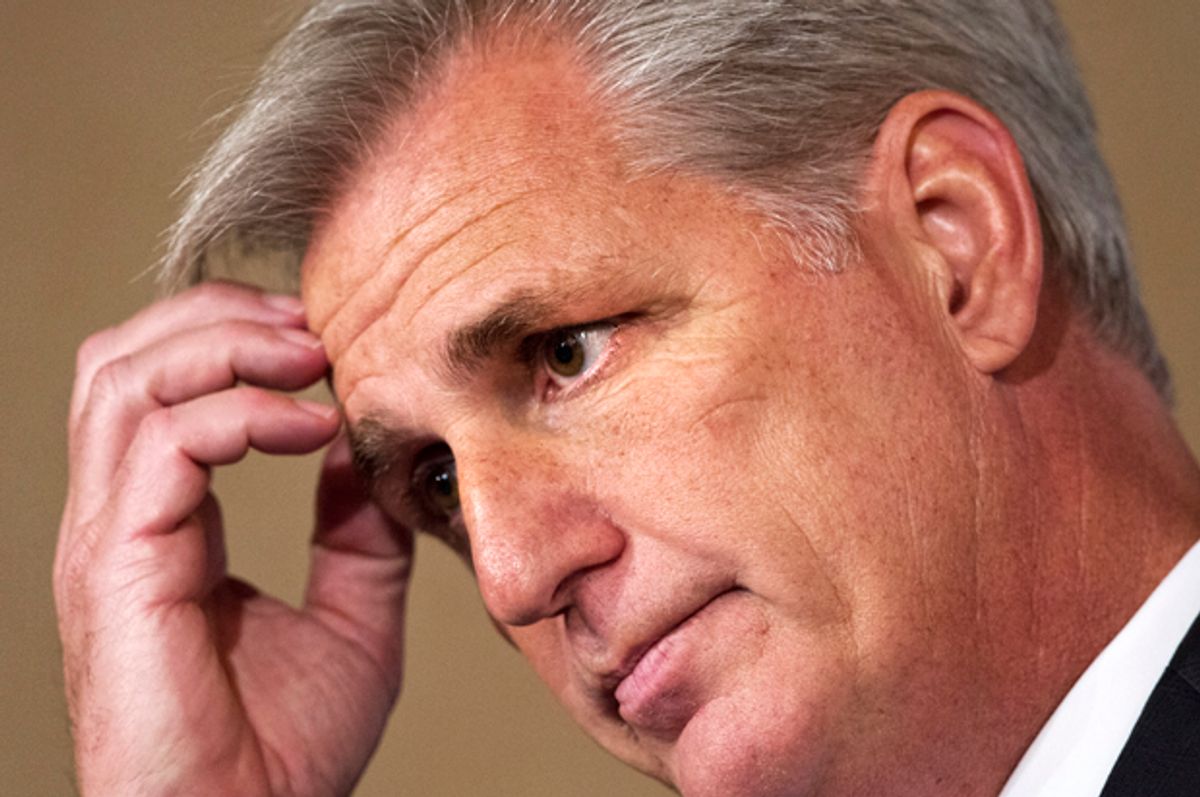 With the election of Donald Trump as president and the GOP's retaining control of Congress, the long-promised Republican goal of repealing the Affordable Care Act seems within reach and distressingly likely. But, as has been the case for the length and breadth of the Republican opposition to the ACA, the simplistic political mantra of “repeal and replace” is being undermined by the fact that the GOP still doesn’t have any concrete notion of how to actually do those things.

The issue that Republicans face is that the Affordable Care Act simply is not the horrendous, fiery disaster that they insist it is. The law has been in effect for a few years now, and millions of people are benefiting from it. The uninsured rate is at historic lows. Getting rid of Obamacare necessarily means injecting a huge amount of uncertainty and risk into people’s lives and reopening anxieties over whether they’ll have health coverage in the future. That opens up the possibility of massive political backlash, which Republicans would obviously like to avoid.

The problem is they can’t agree on how to do that. As The Huffington Post reported on Wednesday morning, key Republican leaders in Congress are already divided on how to approach an Obamacare repeal: Do they vote to repeal the law immediately and delay putting this into effect while they come up with a replacement? Or do they come up with the replacement first and then “repeal and replace” all at the same time?

It’s a thorny question for the GOP, because the party has a huge political stake in getting rid of the ACA as quickly as possible, and it will immediately come under pressure from activist groups to do exactly that. But again, repealing the existing law with nothing to put in its place will mean lost coverage, medical bankruptcies and conceivably death for lots of people.

But House Majority Leader Kevin McCarthy doesn’t think that’s a problem. As far as he sees it, repealing Obamacare will create the necessary urgency for Congress to get its act together and figure out something to replace it.

“There will be a transition period,” McCarthy said, adding that the political incentives would motivate everybody, including Democrats, to bargain in good faith over a replacement. “You have a date certain that something is going away, a time period there, you now you need to have something there.”

In response to a question about whether replacement would pass in such a scenario, McCarthy imagined what reporters could ask recalcitrant lawmakers unwilling to sit down and bargain: “You know this is going away five months from now, and you’re going to avoid it? Here’s a time to get it done, but when that date came, and you did nothing? . . . You want to play politics?”

If this logic sounds familiar, well, it should. You might recall that this was the same thinking that went into the passage of budget sequestration in 2011. Lawmakers figured that if they slapped together an IED of indiscriminate budget cuts and then set a timer for when it would go off, then they’d have enough incentive to come up with a more targeted deficit-reduction package that everyone would be compelled to accept.

The plan backfired: No agreement was reached on deficit reduction, and the sequester came due just as former president George W. Bush's tax cuts were set to expire, setting off the “fiscal cliff” crisis that was averted only just under the wire and despite the absurd dickering of House Republicans.

McCarthy now wants to do the same exact thing again, only this time it will be the health care of millions of Americans hanging in the balance. There are a couple of huge flaws with this reasoning.

First off, congressional Republicans have already been in a position of having to craft an Obamacare replacement on a drop-dead deadline, and they failed. Last summer Republicans in Washington were convinced that the Supreme Court would rip a massive hole in the ACA by invalidating its premium subsidies. In anticipation of that eagerly anticipated ruling, McCarthy convened a special working group to come up with a replacement plan to have at the ready.

Months passed, and no plan emerged. Faced with the task of finding a way to “transition” from Obamacare, Republicans in Congress were unable to come up with any serious proposal. The court ultimately ruled that the subsidies were indeed legal, sparing the GOP from having to grapple with this challenge — until now.

Second, McCarthy seems to think that he’ll have the upper hand politically over Democrats, who will be forced to participate in a “good faith” effort to stave off the havoc that would be caused by a total repeal. It’s hard to imagine a more cynical position for a Republican legislator to adopt regarding health care reform. His plan is basically to pile all America’s newly insured people into a boat, drill a bunch of holes in its bottom, then point at the rapidly sinking vessel and scream at Democrats, “WHY ARE YOU LETTING THIS HAPPEN?”

Democrats have no obligation to play this game. If Republicans insist on going down the wildly irresponsible road of creating a health care crisis with no plan to avert it, then the Democrats owe them nothing but unrelenting opposition.