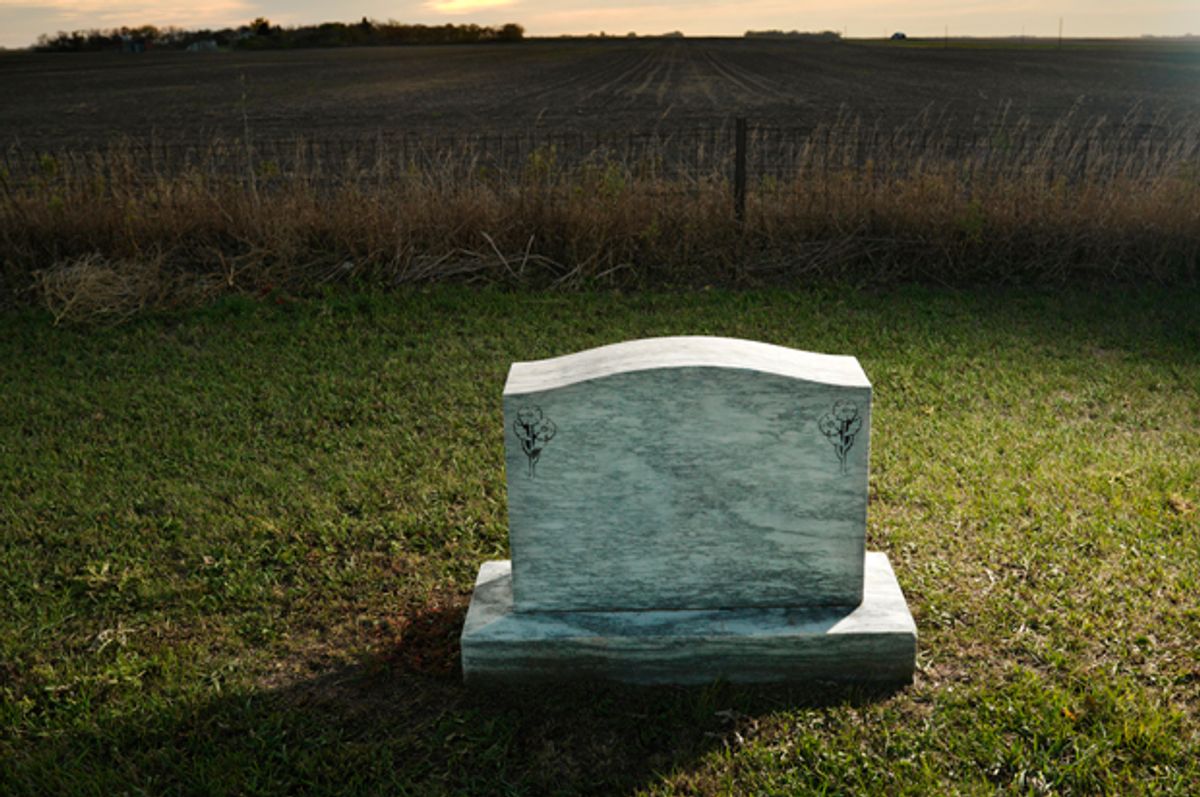 In June anti-choice activists in Texas suffered a serious setback in their attempts to make abortion as miserable as possible for women. That was when the Supreme Court overturned a series of medically unnecessary regulations enacted for no other reason than to make abortion more onerous, time-consuming and expensive for women.

But Texas conservatives are still determined to find ways to punish women who fail to bring a pregnancy to term. This time around, it won't just be women who get abortions who will suffer, but also women who have miscarriages.

In early July shortly after the state lost in its efforts to make abortion pointlessly miserable and expensive, state health officials quietly proposed new rules requiring what amounts to funeral arrangements any time a woman loses or terminates a pregnancy outside of her home. Now the funerals-for-embryos rule will be in effect before the end of the year.

"Despite intense outcry from the medical community and reproductive rights advocates, the state will prohibit hospitals, abortion clinics and other health care facilities from disposing of fetal remains in sanitary landfills, instead allowing only cremation or burial of all remains — regardless of the period of gestation," Alexa Ura of the Texas Tribune reported.

Even when "the embryo is so small as to be invisible," as David Brown, a staff attorney for the Center for Reproductive Rights, explained over the phone, the doctor or health care provider will still have to treat it like a dead person and hold some kind of burial or cremation for it.

“We see the rule as one more attempt by Texas politicians to pile on the burdens on women seeking medical care for miscarriage or abortion," Brown added.

The Center for Reproductive Rights is still reviewing the rule — which Brown described as "written in an extremely unclear and somewhat circular fashion" — but Brown suggested it's likely that the organization will eventually sue to stop Texas from enforcing this rule with medical professionals.

The new law appears to be an unsubtle attempt to shame women who fail to bring a pregnancy to term, regardless of whether they wanted to terminate it or not. That alone is reason to oppose it, but Brown says he is also worried about the law's impact on women's ability to get timely and safe medical care.

“It may dissuade women who need medical care from seeking medical treatment," he noted.

The law exempts women who abort or miscarry at home, after all. If a woman starts to miscarry at home, but knows she may be forced to pay for funeral services if she goes to a hospital for help, she might stay at home and hope that the failing pregnancy works itself out on its own.

There's already significant evidence that a large number of Texas women are turning to DIY abortion methods rather than going to a doctor. The most popular method is using misoprostol, a drug that can induce miscarriage, either bought over the counter in Mexico or from a black-market dealer who buys in bulk and brings it over the border. While misoprostol is relatively safe and effective, women who take it run the danger of having an incomplete miscarriage and infection, which is why doctors prefer it be taken under medical supervision.

But if going to a doctor means you need to hire funeral services for what looks, to the naked eye, exactly like the tissue from a heavy menstrual period, many women may be tempted to go the black-market route.

It appears that there's no limit on how bizarre Texas conservatives are willing to go, if it means making abortion more fraught or miserable for women. Now the anti-abortion crusaders are willing to punish women who suffer unwanted miscarriages, bringing the zealots closer to their goal.