"This is not about you": President Obama gives advice to Donald Trump in his interview with Rolling Stone

In a wide-ranging interview, the president reflects on his time in office and whether Michelle Obama will run 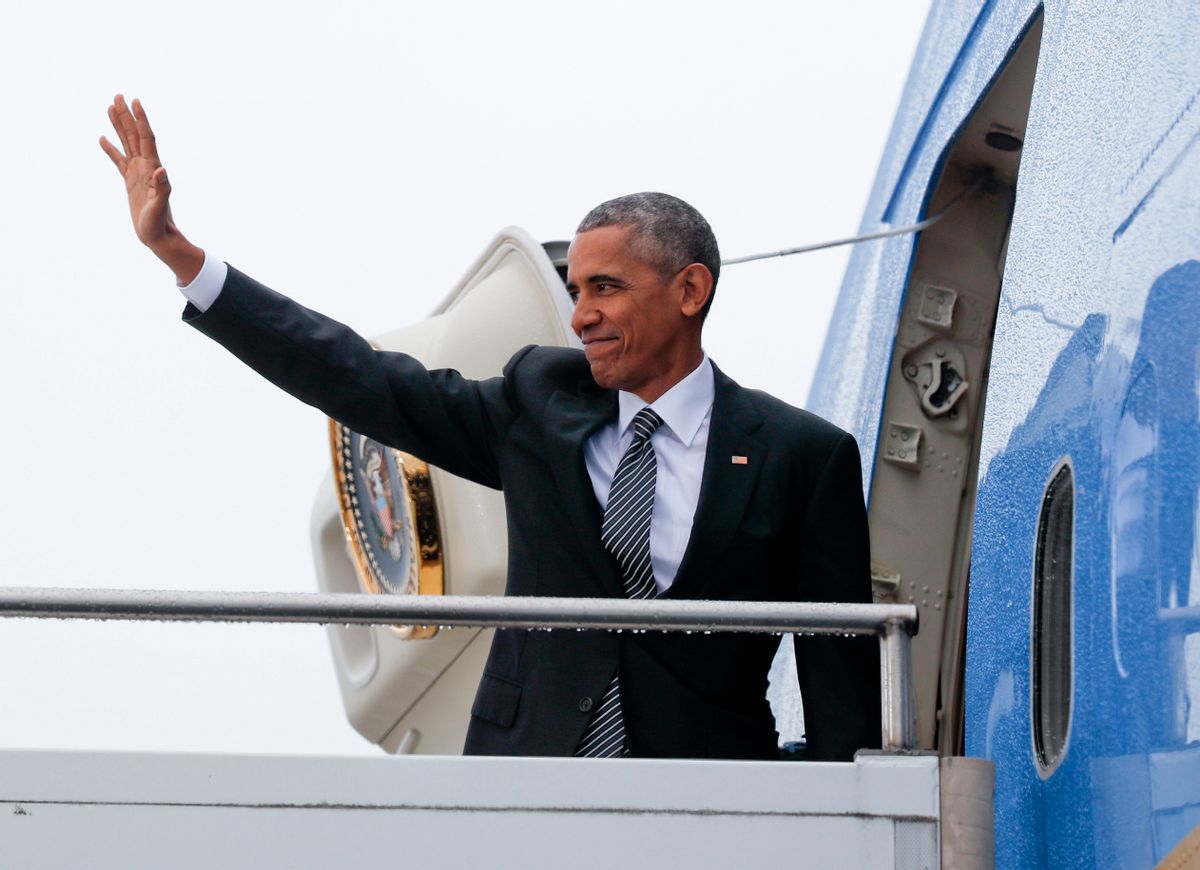 US President Barack Obama waves as he boards Air Force One during his departure from Tegel International Airport in Berlin, Friday, Nov. 18, 2016. (AP)
--

Rolling Stone published an interview conducted by its publisher of President Barack Obama on Tuesday. While his disappointment in the 2016 election was palpable, the president nevertheless struck a reassuring note — and offered readers some interesting insights about the future of America.

Perhaps Obama's most intriguing comment came after the very first question, when he was asked about how he felt about Trump's victory.

"Well, I'm disappointed, partly because I think Hillary Clinton would be a very fine president," Obama said, notably referring to the prospect of a Hillary Clinton presidency in the present tense. (Hillary 2020, anyone?) "A lot of the work we've done is only partially complete. And we need some continuity in order for us to maximize its benefits."

He recalled a moment in New Hampshire in 2008 that taught him about the unreliability of polls and predictions.

"I had just won Iowa and had this whirlwind tour of New Hampshire, huge rallies, huge crowds, and our internal pollster had us up by 10. And around 7:30, as I'm putting on my clothes to deliver my victory speech, I get a knock on the door by David Plouffe, David Axelrod and Robert Gibbs. And they've got sheepish looks on their faces. [Chuckles.] And they say, 'Barack, we have some interesting news for you. We don't think we're gonna win this thing.'"

That said, for those who are hoping Obama's first lady will consider a White House run, the president was quick to pour cold water on those hopes.

"Michelle will never run for office," Obama declared. "She is as talented a person as I know. You can see the incredible resonance she has with the American people. But I joke that she's too sensible to want to be in politics."

While Obama insisted that he was not "dismayed" because he "couldn't be prouder of the work that we've done over the last eight years," he refused to beat around the bush when it came to the impact of Trump's election.

The interview became a slightly testy when Obama was asked how the Democrats lost so much support among white, working-class voters. Instead of accepting the premise that Democrats were out of touch with voters' economic concerns, Obama characterized the problem as "a cultural issue," cutting off his interviewer when he tried to interrupt him.

"The challenge we had is not that we've neglected these communities from a policy perspective," Obama said. "You start reading folks saying, Oh, you know, working-class families have been neglected, or, Working-class white families have not been paid attention to by Democrats. Actually, they have." Obama pointed out his administration's efforts to save the auto industry in Michigan, support for minimum-wage laws and family-leave policies, investment in community colleges and the Affordable Care Act.

The president continued, however, "What is true, though, is that whatever policy prescriptions that we've been proposing don't reach, are not heard, by the folks in these communities. And what they do hear is Obama or Hillary are trying to take away their guns or they disrespect you."

For those with long memories, this is similar to Obama's comments in 2008 about Rust Belt voters: "They get bitter, they cling to guns or religion or antipathy to people who aren't like them or anti-immigrant sentiment or anti-trade sentiment as a way to explain their frustrations."

That said, Obama does not see the 2016 election as a "huge turn to the right."

"If you survey the American people, including Trump voters, they're in favor of a higher minimum wage," Obama said. "They're in favor, in large numbers, of decriminalizing marijuana. They, I think, are, increasingly and with shocking speed, accepting of the need to treat the LGBT community with respect. They are hugely suspicious of Wall Street, hugely suspicious of the Establishment."

Obama continued, "Part of what Trump did, as well as Bernie, was run against that Establishment. Now the irony, of course, is that one would think Trump would be considered part of that Establishment and not a genuine outsider like Bernie was. So this doesn't seem to be a moment in which there is a huge turn to the right."

Finally, Obama offered a glimpse into the advice he planned to share with Trump at their first meeting (as the interview was conducted the day after the election): "Number one, however you campaigned, once you're in this office, you are part of a legacy dating back to those first Revolutionaries," Obama said. "And this amazing experiment in democracy has to be tended. So aside from any particular issue, the president needs to recognize that this is not about you. This is not about your power, your position or the perks, the Marine band. This is about this precious thing that we’ve inherited and that we want to pass on."