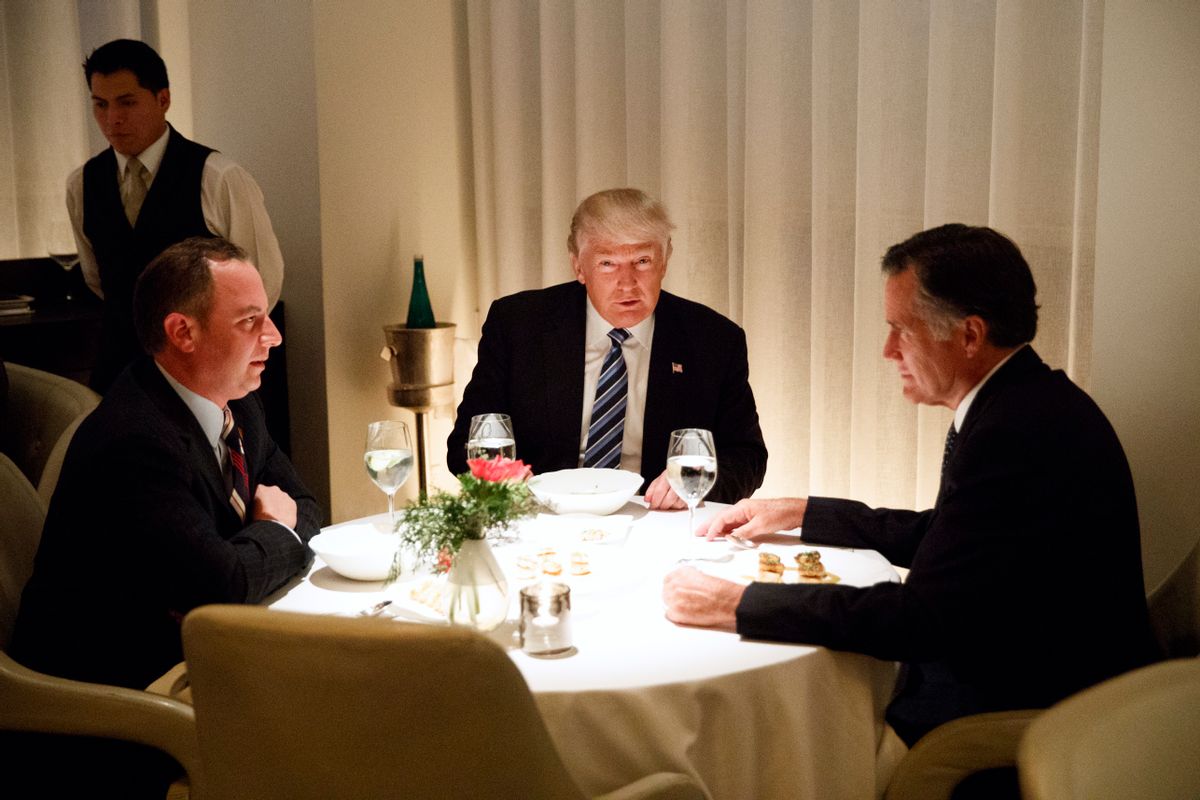 "There's a scene in 'Pretty Women' where Richard Gere goes up to the salesman on Rodeo Drive and says: 'We need a little sucking up here,'" Gingrich said during an appearance on The Laura Ingraham Show on Wednesday. "You have never, ever, in your career seen a wealthy adult who is independent, has been a presidential candidate, suck up at the rate that Mitt Romney is sucking up."

Gingrich also went on to describe the lavish meal that Trump shared with Romney and Reince Priebus, the current Republican National Committee chair who is slated to be Trump's White House chief of staff.

Gingrich joked about the men eating foie gras, escargot, pheasant, and frog legs. According to a CNN report on Tuesday, all three men ate the same appetizer - diver scallops with caramelized cauliflower and caper-raisin emulsion and a young garlic soup with thyme and sautéed frog legs. For entrees, Trump and Priebus had prime sirloin with citrus glazed carrots, while Romney had lamb chops with a mushroom bolognese sauce. All three men had chocolate cake for dessert. As has become the norm when it comes to mocking Mitt Romney, when Gingrich says something, you can be sure that Huckabee is not too far behind.

“Both [future chief of staff] Reince Priebus and Donald Trump were having filet,” Huckabee said on Wednesday on Fox News. "On Mitt Romney’s plate there was a big, big slice of crow."

As he has mentioned before, Huckabee's main objection to Trump's desire to cozy up to Romney is his sense that this betrays Trump's own supporters.

“I think that the outrage that is being expressed among many Trump supporters is that it wasn’t just that Romney dissed Donald Trump, but that he really took a swipe and spoke contemptuously of the people that made Donald Trump the president of the United States," Huckabee observed. "At some point, Mitt Romney has to address that.”

If nothing else, Twitter users have made it clear that the awkwardness of the Trump-Romney dinner will never, ever be forgotten.

Within 24 hours Trump will tweet that he never had dinner with Mitt Romney and CNN will be asking a panel of experts, "What even is dinner?" pic.twitter.com/i8eREEq0cN — Joseph Scrimshaw (@JosephScrimshaw) November 30, 2016

Romney just said Trump will make America great again. I kid you not. Boy, that must have been one hell of dinner. Wonder who paid the bill?