North Carolina's Pat McCrory may have just been thrown a lifeline, but he's already lost the governorship 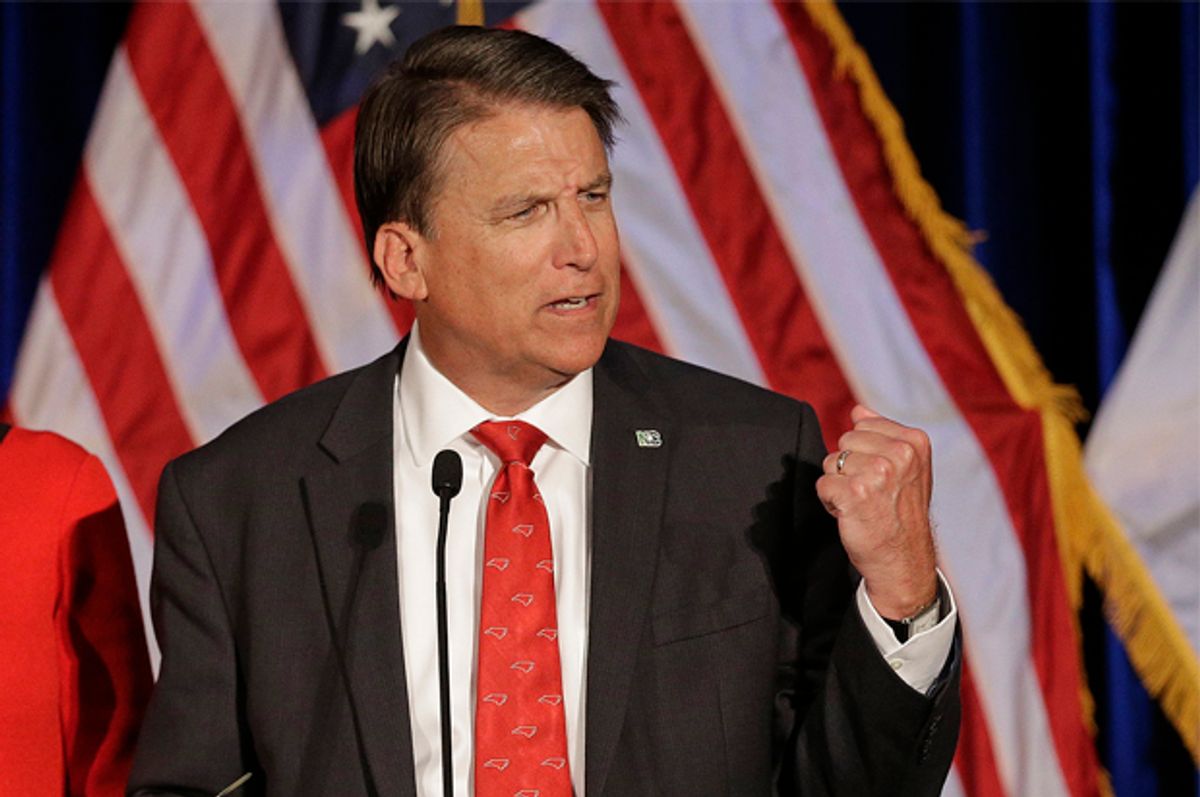 Nearly a month after Election Day, Republican North Carolina Governor Pat McCrory's bid for re-election has been thrown a lifeline just as his Democratic challenger's lead grows to over 10,000 votes.

Three Republican members of the State Board of Elections voted Wednesday to overturn a Nov. 18 decision by the Durham County elections board rejecting McCrory's request for a recount in the liberal county that is home to Duke University and heavily favored McCrory's Democratic challenger, Roy Cooper.

As of Wednesday, Cooper’s lead was 10,329 over McCrory, with 94 of 100 counties having finished their counties, ABC affiliate WSOC reported. But McCrory has refused to concede, alleging that improper vote counting, dead people and felons swung the vote for his Democratic challenger. On election night, Cooper was actually trailing McCrory until 90,000 votes from Durham came in late. The governor has since accused the county of voting improprieties.

According to ProPublica, McCrory accused 43 people in the state of casting ballots illegally, claiming they were barred from voting because they were felons, but 18 of those accused were not actually felons.

With its 3-2 vote along party lines, the State Board of Elections ordered more than 90,000 Durham County early votes recounted by hand, citing alleged “malfeasance” in the election night count by a supporter of McCrory.

The governor's election night vote deficit of less than 4,500 votes has since grown to more than 10,000 vote lead for his opponent as absentee and provisional ballots have been counted, surpassing the threshold for a mandatory recount. Under North Carolina law, McCrory can demand a statewide recount if he trails by 10,000 votes or fewer once all 100 counties have certified their vote totals. There are still four counties left to certify their vote totals as of Thursday.

Until Wednesday night, many of the rulings of the state elections board and 100 county boards — all of which are controlled by Republicans — have gone against the governor's effort to save his seat. With their decision, Republicans on the State Board of Elections ignored a state election official who proofread the results and testified they were accurate.

"It’s necessary that the public have faith and confidence in the system," James Baker, a Republican board member, said at the hearing on Wednesday. "Let’s get it all out in the open."

"We are pleased that the State Board of Elections has recognized the voting irregularities in Durham County and we will respect whatever the results show," said Pat McCrory campaign manager Russell Peck. "We ask that this is done immediately."

For its part, the North Carolina Republican Party has not GOP ruled out a request for a statewide recount, according to WTVD. But as the nonpartisan group FairVote has noted, none of the 27 statewide recounts since 2000 has changed the margin in a race by even 2,000 votes.

The Durham County Board of Election chairman told WTVD that a recount could take as long as a week and cost tens of thousands of dollars. So, after weeks of refusing to concede defeat, North Carolina's Republican governor will likely only be a step closer to the reality he's been avoiding. McCrory now says he’ll surrender if Durham County produces similar results in a hand recount of all 94,000 early votes.