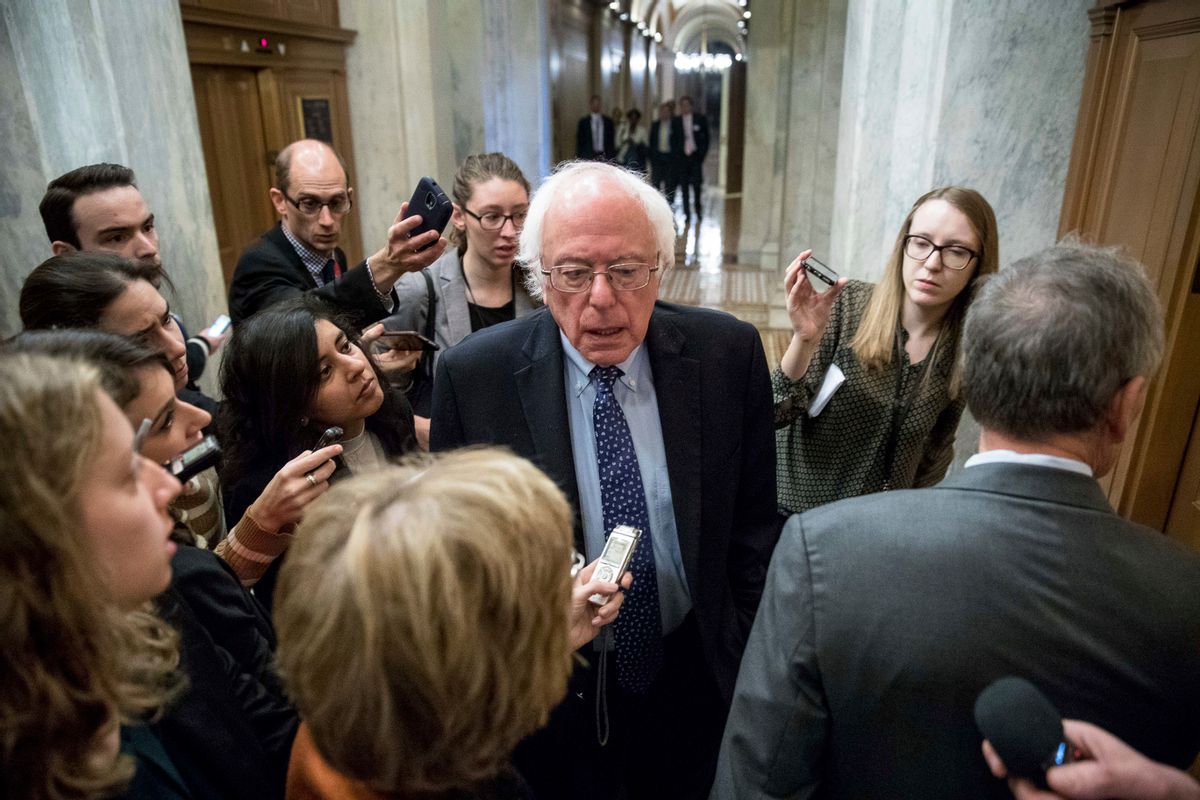 Vermont Sen. Bernie Sanders mocked the U.S. House Committee on Science, Space & Technology for tweeting a Breitbart article suggesting that global temperatures were in a "plunge" — despite scientific consensus saying the opposite.

On Thursday, the official Twitter account of the Republican-led committee sent out a link to the right-wing media outlet in a tweet that read, "Global temperatures plungy. Icy silence from climate alarmists."

The committee is chaired by Texas Republican Lamar Smith, a climate science doubter who reacted to the enactment of the Paris Climate Agreement by referring to climate change as “science fiction,” although it is unclear who sent the tweet.

"We've been getting a lot of calls about this today," said Beth Larson, a policy assistant at the House Science Committee when reached for told Business Insider. "We're feeling pretty overwhelmed."

In the Breitbart article tweeted by the Republican-led Congressional committee, writer James Delingpole claims the science behind global warming is "in its final death rattle." Referring to a study cited from British gossip site, the Daily Mail, the article begins by asserting that "Global land temperatures have plummeted by one degree Celsius since the middle of this year – the biggest and steepest fall on record."

In reality, 2016 is already locked into being the hottest year on record, and October 2016 was among the three warmest Octobers on record. Meanwhile, the Arctic has lost a record-breaking amount of sea ice this year. Furthermore, 2017 has long been expected to be somewhat cooler than 2016 as a result of the La Niña weather pattern.

But Republicans on the House Committee on Science, led by a man who has received a total of about $700,000 in campaign contributions from the fossil fuel industry since 2008, including $19,500 from Exxon, publicly shared misinformation denying scientific consensus from a Breitbart writer whose other recent headlines include: "Trump at NASA: Hasta la vista climate fraud and Muslim outreach…" and "Trump's war on the green blob will make (almost) all of us richer, happier and freer."

The committee's 38 members are in charge of all energy, environmental, marine, civil aviation and astronautics research and development. This includes oversight of NASA, the Department of Energy, the Environmental Protection Agency, the National Oceanic and Atmospheric Administration, the National Institute of Standards and Technology, the Agency for Toxic Substances and Disease Registry, the FAA, the National Science Foundation and FEMA.

In his own tweet Thursday, Sen. Sanders called out his Congressional colleagues for spreading false information from such a dubious source:

Sanders joined one-time rival Hillary Clinton in publicly calling out the nefarious involvement of the right-wing misinformation outlet, Breitbart News. Since president-elect Donald Trump's gold-encrusted entrance into the GOP primary, Breitbart has suddenly skyrocketed to a level of prominence within Trumpworld and the larger Republican Party that can only be rivaled by Rupert Murdoch's right-wing media empire (Fox News, Wall Street Journal).

During her general election race, Clinton dedicated a speech outlining the impact of Breitbart and the racist faction of the alt-right on Trump's campaign and its reliance on the language of white resentment.

Since winning the election, Trump has announced that former Breitbart head Steve Bannon will become his top White House adviser.

Meanwhile, more than 2,300 worried American scientists, including 22 Nobel Prize winners, issued an open letter to the president-elect and Congress Wednesday, urging them to respect science.

Many Democratic members of Congress also joined Sanders in slamming House Republicans for their reckless tweet:

This isn't factual, it's embarrassing, and Breitbart is not a credible news source. We need to bring *science* back to the Science Committee https://t.co/oZ6GfFAlUI