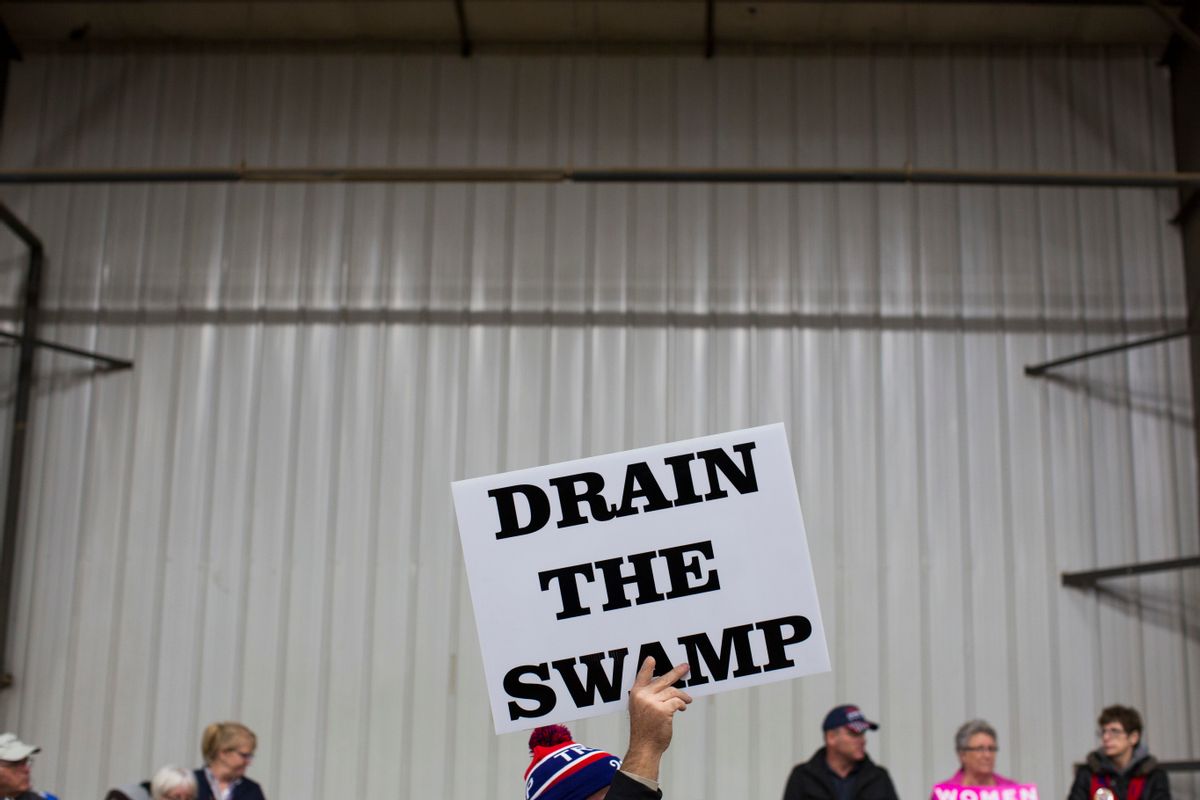 FILE - In this Oct. 27, 2016, file photo, supporters of then-Republican presidential candidate Donald Trump hold signs during a campaign rally in Springfield, Ohio. President-elect Donald Trump’s campaign promise to “drain the swamp” of Washington might make it difficult for him to fill all the jobs in his administration. () (AP Photo/ Evan Vucci, file)
--

Donald Trump is nothing if not cunning and deftly attuned to his audience. Perhaps that's why he's displayed a boatload of gumption with his announced cabinet selections so far, like naming preeminent Wall Street insider Steve Mnuchin to head the Treasury Department this week. Trump appears confident that so long as he sprinkles announcements of supposed job-saving -- like his Carrier gambit -- while assembling the most plutocratic administration in modern American history, his diehard supporters will forget all about his campaign pledge to "drain the swamp."

According to various interviews with swing-state Trump supporters, the President-elect's apparent failure to ban Beltwa lobbyists and Wall Street insiders from his transition team and incoming administration barely register as a concern.

The people “that Trump has appointed or nominated have all been top of the class, No. 1 in their field, extremely talented, great leaders on their own,” one New Hampshire Trump voter told CNN's Alysin Camerota in a "New Day" interview that aired Thursday.

Yet Trump voters see no problem.

"Better Trump’s swamp than Obama’s swamp. At least he’s gonna get us something,” 57-year-old Mark Ross of Unionville, Pennsylvania, told McClatchy. “If Hillary had won – and you know, she really is a swamp person – she would have had to pay back with favors all these interests that sent her money.”

John Walton of Pittsburgh, age 29, credited Trump for relying on the lobbyists he routinely blasted on the campaign trail during his transition to the White House.

“Of course he’s going to take on smart people, doesn’t matter whether they’re lobbyists or not,” Walton said.

“This is his thing. He is a successful businessman who hires people to get him . . . what he wants,” 42-year-old Fred Harris of Philipsburg, Pennsylvania, echoed. “If he has to use swamp people to make America great again, why not?”

“Oh yeah, people loved it. ‘Drain the swamp’ and ‘Build the wall,’” Harris said. “But I’d rather he focus on building the wall.”

“I don’t think that should be the main thing on his mind right now,” said the 62-year-old woman. “Everyone down there is involved in the lobbying. It’s going to take a long time.”

Anne Freeman, a 34-year-old stay-at-home mother, shared a similar sentiment. “To be frank, it’s more important he gets things moving, like getting rid of Obamacare and fixing the schools, and jobs,” she said. “I don’t much care how he does it. That’s up to him.”

Trump's failure to drain the proverbial swamp, choosing instead to fill it with many of the same creatures, has left some of Trump's most vocal supporters, however, suddenly aligned with the dreaded establishment in criticizing the president-elect's broken promises. Still, many in the conservative establishment continue to cheer Trump's selection of lobbyists and Washington insiders just loudly as his Rust Belt voters do.

"I think what he's done so far shows two things," former Georgia senator Saxby Chambliss told CNN. "Number one: He has picked people that know how the system works and are willing to make the commitment to him and his policies to make sure the trains run on time and the train stays on the track, and I think that's very important, particularly for someone who ran as an outsider. Secondly, I think most importantly, he's picking talent." Perhaps it's coincidental that Chambliss now works for the lobbying and law firm DLA Piper.