Democrats are ready to go to war to save Medicare: "Republicans that want to privatize Medicare, make our day"

Republicans argue that changing Medicare will save it, but Democrats are ready for that battle 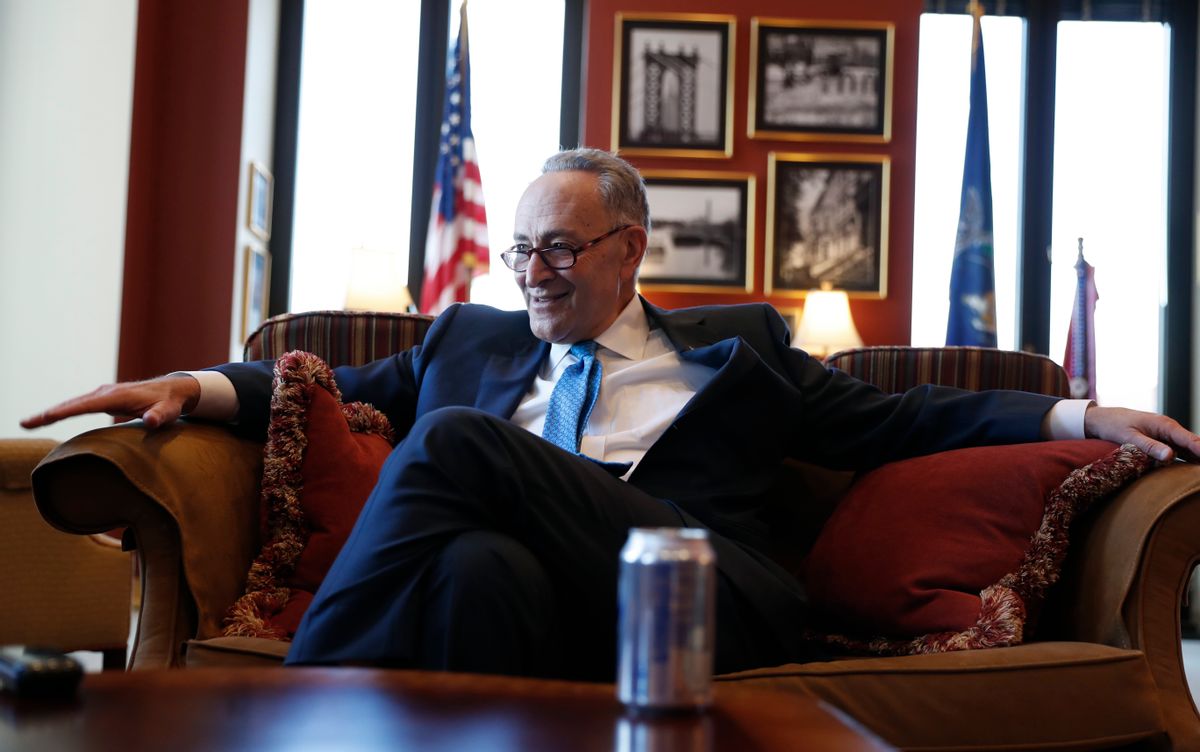 Senate Minority Leader-elect Chuck Schumer of N.Y. speaks during an interview with The Associated Press in his office on Capitol Hill in Washington. (AP)
--

WASHINGTON — The chairman of a key House committee is pledging that congressional Republicans will change Medicare in order to save it.

GOP Rep. Kevin Brady of Texas, head of the Ways and Means Committee, insisted Thursday that Republicans won't be deterred by the politics, even though Donald Trump won election as president on promises to protect the popular health care program for older Americans, and Democrats are already warning of a "war on seniors."

"Democrat tactics of 'Mediscare' have been around a long time. They've stopped working," Brady told The Associated Press in an interview in the Capitol. "Voters have figured out Republicans want to save Medicare for the long term, and they know that those who say everything's just fine with it aren't leveling with them."

But Brady also said the GOP will move cautiously on Medicare, starting with smaller changes. And he declined to say when the party might try to pass "premium support," the controversial approach that would, over time, remake Medicare into a voucher-like program that would force seniors to buy health insurance on the open market.

Critics say such coverage would take away the "Medicare guarantee" and give seniors subsidies whose value won't keep up with inflation.

"I think it's important, especially in health care, to take this step by step," Brady said. "Whether it's the replacement of the Affordable Care Act, how we make Medicaid work better, how we save Medicare for the long term."

"So I envision 2017 as taking steps, small, in preparing for larger steps to save Medicare for the long term," he said, mentioning early reforms in the areas of post-acute care — nursing homes, home health care agencies and rehabilitation facilities.

"I'm absolutely confident, in fact I'm optimistic, that by focusing on quality and innovation in Medicare that we can save that program for the long term in a very positive way," Brady said.

Democrats have already made clear that they view the GOP focus on Medicare as a ripe political target. The incoming Senate Democratic leader, Chuck Schumer of New York, fired an opening salvo earlier this week when he declared at a news conference: "It's clear that Washington Republicans are plotting a war on seniors next year. Every senior, every American should hear this loudly and clearly: Democrats will not let them win that fight."

"We say to our Republicans that want to privatize Medicare, go try it, make our day," Schumer said.

Democrats have had political success in the past by attacking GOP plans to overhaul entitlements. Right after getting re-elected in 2004, President George W. Bush held a news conference in which he claimed a mandate for change — and that meant entitlements. The ongoing Iraq war and that push on Medicare and Social Security cost the GOP control of the House and Senate in 2006.

Now, with Republicans in control of both chambers of Congress and the White House next year, Democrats clearly view those same issues as their path back into the majority.

The lesson is not lost on Republicans, and several Senate Republicans said this week that they would not be eager to make Medicare changes their top priority, especially given their plans to move quickly to repeal President Barack Obama's health care law.

"I think the first priority is Obamacare and that's going to take most of the oxygen out of the room," said Sen. John McCain, R-Ariz. "The Medicaid issue, Medicare is very controversial. We were committed to repealing Obamacare, and that's what we've got to do first."

Medicare, in place more than a half-century, is considered the government's flagship health insurance program. It covers about 57 million people, including 48 million seniors and 9 million disabled people. Medicare has strong public support across party lines and generations.

But Trump already appears to be shifting. His transition website mentions modernizing Medicare, though without details, and his nominee for secretary of Health and Human Services, GOP Rep. Tom Price of Georgia, has also backed the premium support idea.