"Dapper" and dangerous: The ugly history of glamorizing white nationalism 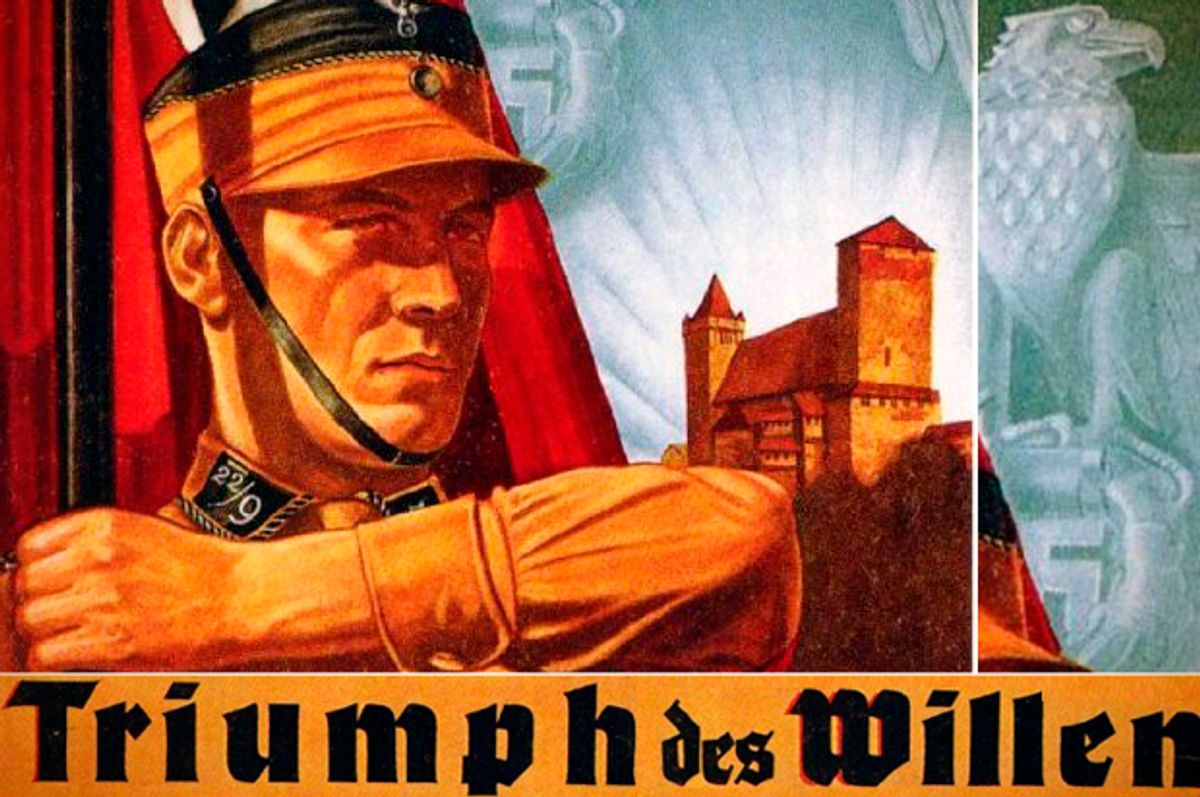 Add gold cuff links and a Swiss timepiece to a Brooks Brothers jacket, and what do you get? Not a particularly snazzy day for Zac Posen, but rather, a man who believes that those like Posen shouldn’t even be in our country.

You get Richard Spencer, the golden boy of the so-called alt-right whose “dapper” style has turned heads since his “Hail-Trump!” victory speech in D.C. last month. When outlets from Mother Jones to the LA Times played up Spencer’s swagger, critics lashed out across the board. Mic’s Jack Smith IV accused the supremacist of “dressing up” his racism and the media of “taking the bait,” normalizing white nationalism. New York’s Anna Silman (a former Salon writer) claimed that the alt-righter’s “style is a propaganda tool . . .  a strategic act of image maintenance” used to “disarm opponents” expecting something less polished. “Spencer is dangerous,” as the Washington Post’s John Woodrow Cox put it, “because, when he doesn’t want to, he doesn’t look or sound or act dangerous” — exposing our country’s classist (not to mention racist) assumptions of peril.

Of course there’s nothing fly about a "Sieg Heil," and goosestepping isn’t runway-friendly. That said, it makes sense that so much has been made about the “new look” of neo-Nazism. When a look becomes part of a political ideology (think Black Panthers and black turtlenecks, Che’s beret, the emblazoned sash of a suffragette) it’s easy for history to codify the look as harmless Halloween fare. The danger rises when the ideology itself becomes part of the “look” — an accouterment to a three-piece suit, a stance to match a pair of shades.

And that’s where we should be concerned. Natty nationalists are nothing new; our nation just seems to have forgotten about them.

More than 80 years ago, Leni Riefenstahl’s documentary “Triumph des Willens” (“Triumph of the Will") went to great lengths to aestheticize (read: normalize) the lithe and nubile Nazi. “Germany’s rebirth” is at first witnessed from the cloud-strewn heavens of the führer’s plane, as though he’s descending upon a romantic drama. Down below, attractive youth wrestle in piles of other attractive youth, nary a flaxen hair out of place. Between shots of Hitler parading through town in a well-appointed drop-top, close-up shots and pans focus on specific parts of the strapping Nazi body: a clean-cut jaw turning slowly in the sun, a series of taut male torsos cut off above the neck and below the waist. A shot featuring a storm of white-socked horses shifts to armored vehicles spewing mud into the air. It’s “Fast and the Furious,” Third-Reich style, equal parts macho and slick.

Until her death in 2003, Riefenstahl rejected charges of propaganda, saying that her films focused on “images over ideas,”as though onscreen the two could be separated. But if anything, subordination of the idea bolsters its insidiousness, like a cancer mistaken for a beauty mark. In the filmmaker’s “Festival of Beauty,” part of a tribute to the 1936 Berlin Olympics, athletes tumble, horserace and swan dive to a soaring classical score. Richard Spencer lookalikes massage each other’s calves, slapping each other’s bodies with birch leaves in a wet and crowded bathhouse. The scenes are valedictory and quite erotic, distracting us from the fact that we’re ogling Nazis.

Sex appeal and white nationalism have long interlocked, like the Cs of the classic Chanel logo (Coco herself canoodled with a fascist for a time). Many of the biggest names in 20th-century fashion had ties to Nazi glamour; Louis Vuitton and Christian Dior were among the Third Reich’s loyal suppliers, and menswear designer Hugo Boss made his name creating uniforms for Nazi youth. Some say that French fashion houses had little choice — members of the Resistance (including Dior’s sister) risked deportation. Still, it’s important to recognize that looking good was always a Nazi priority, and many in fashion were willing to lend a hand.

Since the fall of Germany, Nazi chic has often surfaced as a clumsy, painfully naive means of provocation, especially in the music scene. Sieg Heil salutes have shown up not only in the posturing of metal bands Mötley Crüe and Pantera, but also in artists oft remembered for radically liberal mores — whether as a deranged middle-finger to the Lost Generation, as in the case of the Sex Pistols, or in an indulgent fulfillment of a pseudo-ironic persona, as in David Bowie’s spindly “White Duke” period. Bowie was, after all, the guy who also said, “Adolf Hitler was the first rock star” — insightful, for all its offense, in illuminating the conflation of image and power.

In hip-hop, Nazi allusions can seem even more incongruous, especially when deployed by women. Take DeJ Loaf’s verse “I hate n***as, I’m a Nazi” in her hypnotic 2014 hit “Try Me.” Riffing off of an earlier Kanye West lyric in “Flashing Lights” (“I hate these n***as more than a Nazi") DeJ takes it one step further; she is one. It’s audacious, sure — especially coming from a diminutive female rap artist. But is it justifiable? Her declaration might be construed as a conscious upending of extreme patriarchal power, but when such power was aligned with genocide, should it ever be endorsed?

That same year, Nicki Minaj’s lyric video for “Only” was so rife with fascist imagery that it prompted a statement from the Anti-Defamation League. Before red flags displaying “Young Money” initials bent to resemble a swastika, animated images of arm-banded soldiers gaze up at a looming Führer-Minaj glaring from her throne. Chris Brown makes a cameo as a decorated SS officer, Drake as a sullen Catholic priest, and Li’l Wayne as a dreadlocked mob boss. Behind the all-caps lyrics “bad bitches,” “independent bitches” and “thick bitches,” any message from the video is rendered moot in what is, at best, mindless, convoluted parroting of one of history’s worst eras.

In response to the ADL slam, Minaj was regretful, betraying a gross ignorance on Twitter for what the images ever meant: “I didn’t come up w/the concept, but I’m very sorry & take full responsibility if it has offended anyone. I’d never condone Nazism in my art.” There were also those like Dazed’s Thomas Gorton who believed the campy video was “so evidently a piece of theatre that it’s impossible to take seriously.”

Fast-forward two years to November 2016: Trump is elected president and proceeds to stock his cabinet with figures praised by real white supremacists in the real United States. In such a time, one must ask whether any Nazi flourish can be simply dismissed as rebellious or ironic — how easily style can neutralize dogma, how seductively beauty can camouflage harm. “Melania is a very beautiful woman,” said Tommy Hilfiger to Women’s Wear Daily last week, “and I think any designer should be proud to dress her . . .  I don’t think people should become political about it.” Tell that to designer Sophie Theallet who, after years of dressing Michelle Obama, said she would not clothe the first-lady-to-be in any way, explaining that “[t]he rhetoric of racism, sexism, and xenophobia unleashed by her husband’s presidential campaign are incompatible with the shared values we live by.” On Wednesday, Tom Ford joined the Won’t-Dress-Her camp, saying that he was asked to years ago, but “[s]he’s not necessarily [his] image.”

Melania isn’t Leni Riefenstahl and Trump isn’t Richard Spencer (and in fact last week renounced his white nationalist branch of support). But when ethnophobic nationalists can transform a popular Italian franchise into a mini-Nuremberg — and all in the name of our president-elect — it’s time we kick white power off the red carpet.