George Mitchell: If Trump rolls back Iranian nuclear deal, he has limited leverage

The former senator and diplomacy expert talks to Salon about Iraq and Afghanistan, and why Obama was wrong on Syria 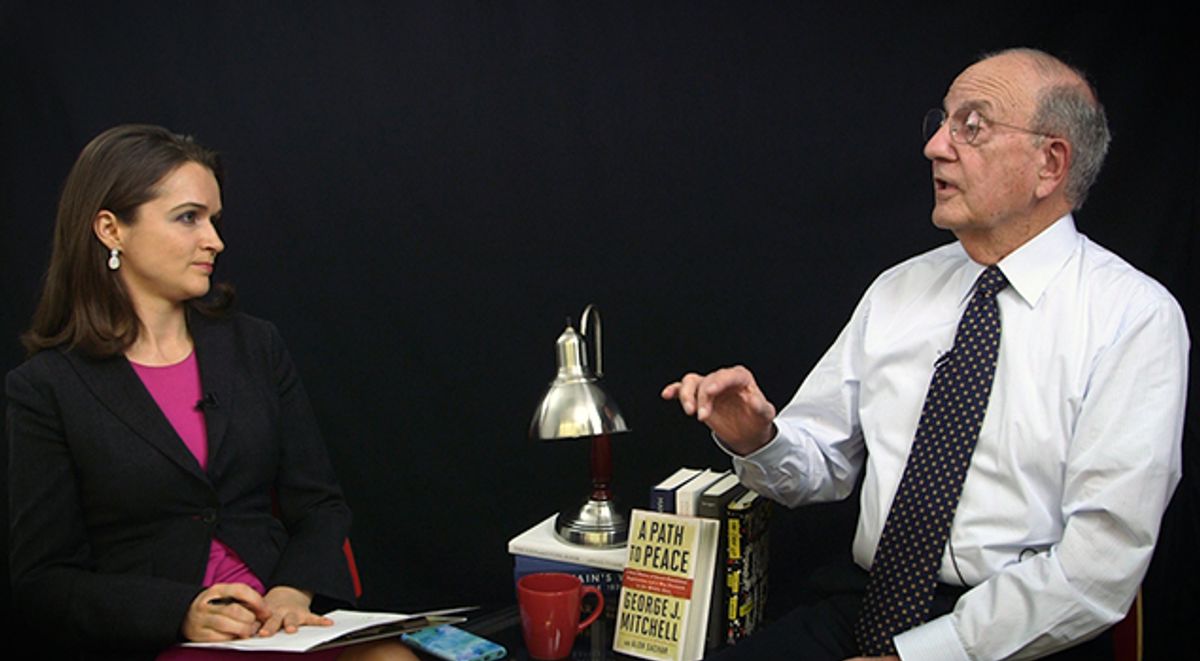 Distinguished diplomat George Mitchell, a former Democratic Majority Leader who also brokered peace in Northern Ireland and served as a special envoy to the Middle East for President Obama, said he hopes that incoming President Trump doesn’t fulfill his campaign promise to scrap the Iranian nuclear deal designed by the Obama administration.

“I believe if he does that, that it would be a tragic mistake that will have serious, adverse consequences for the United States and all around the world,” Mitchell said in a Salon Talks interview about the book, "A Path To Peace: A Brief History of Israeli-Palestinian Negotiations and a Way Forward in the Middle East."

“The United States joined with five other countries — Russia, China, Britain, France and Germany — in reaching a negotiated agreement with Iran over their nuclear program. It is supported by almost every country in the world. The reason the agreement was reached was because sanctions were imposed on Iran that adversely affected their economy. The reason the sanctions worked is because they were universal. They were not just United States sanctions," Mitchell continued.

As liberal critics decry Trump’s cabinet selections for defense and national security as Islamophobic, these critics also fail to grasp the long-term historical view of Islam. Mitchell, a more moderate Democrat who served as Senate Majority Leader, offers a more tempered understanding, citing Pew data showing how there are now 1.7 billion Muslims in the world, or roughly one out of five people, yet by 2060, when the world’s population edges towards 10 billion, one in three will be Muslim.

“Islam is now torn by internal conflict,” he said. “The best known, of course, is the Sunni-Shia divide, which goes back 1,400 years to the death of the prophet Muhammad. It was not a religious difference, it was a political struggle for power, between two factions."

"There are many internal conflicts now: internal to Sunni, internal to Shia, Islam. Overlapping intersections. There is going to be difficulties for decades to come. For the past five hundred years, they have largely lived in political systems that were to some extent created by others. The Ottoman Turks dominated the Middle East for 425 years. Then, you had the peace after the first world war by the British and the French. And so now they’re going through a period of turbulence," Mitchell added. "I think they’ll be some successes. You’re seeing some modest successes in some of the countries, some failures, continues turmoil and difficulty and the President will deal with all of that on an ongoing basis.”

Mitchell said he would “categorically disagree” with critics who argue that the U.S. withdrawal from Iraq was premature, that ISIS filled a vacuum created by the Obama  administration’s failure to sign a new Status of Forces Agreement with the Iraqi government.

“First off, ‘he could’ve gotten an agreement if he tried’ is the slogan of all those who don't want to agree with you,” he said. “The fact is, if Obama had acceded to the Iraqi government's insistence that American forces not be protected from legal action, to extend their deployment, and then an American had been dragged before an Iraqi court, those very people who attacked him for not reaching an agreement would have attacked him on those grounds. Secondly, there is not a shred of evidence, none whatsoever, that if we would have stayed in Iraq for five years, or ten years or twenty years, the outcome would have been any different."

"Go back to the British experience there," Mitchell continued. "It’s the same thing a hundred years ago. And that’s what's happening in Afghanistan now and that’s what’s happening in a lot of other countries. You have to ask yourself the question: do we want to remain permanently in these countries? And when is a withdraw premature and when is it not? The fact is, these are long-standing hostilities, deep divisions and the notion that if the United States had stayed there, oh, just another year or two, the outcome that we could have been withdrawn, I think it’s a complete fiction.”

Even as Mitchell defended his former boss on Iraq and Iran, he also parted ways with President Obama in the ongoing Syrian conflict.