“Jackie” is a must-see: Natalie Portman is Oscar-worthy as the iconic first lady in the days after her husband’s assassination

In "Jackie," Natalie Portman portrays a women dedicated to creating Camelot from the chaos of tragic assassination 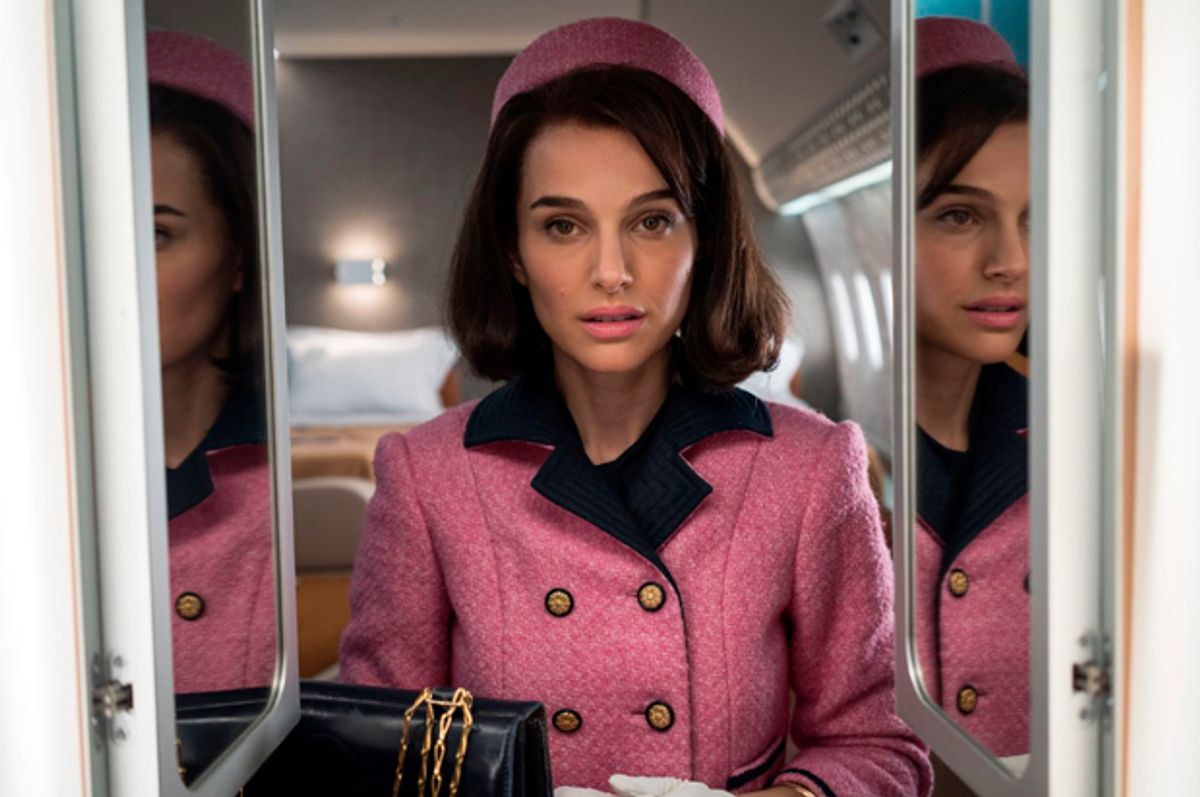 Jacqueline Kennedy was just 34 when her husband was killed.

That fact is crucial to Pablo Larraín’s “Jackie,” a ravishing and bracingly intimate portrait of the first lady in the days after John F. Kennedy, the 35th president of the United States, was assassinated. The film stars Natalie Portman, who doesn’t look at all like the Jackie Kennedy we thought we knew, and that’s by design. Larraín, who also directed this year’s “Neruda,” doesn’t so much recreate an icon in mourning as he makes her anew. “Jackie” transcends mimicry to achieve something greater — bringing the first lady’s grief and resolve in the face of unspeakable loss to vivid life.

The film opens in 1964 just days after Kennedy’s funeral. Against the wishes of her closest confidantes, who would prefer the first lady remain in hiding, Jackie grants an interview to a journalist from Life magazine (a restrained Billy Crudup), who is summoned to the Kennedy Compound in Hyannis Port, Massachusetts. The interviewer, who is based on a composite sketch of the many reporters who would speak with Mrs. Kennedy throughout her life, remains unnamed. The first time the audience sees him, the journalist occupies the lower half of the frame — slightly off-center when we might expect symmetry. The shot is a mission statement for the film itself, a triumph that dares to go to unexpected places that most prestige pics wouldn’t touch.

“Jackie” is a dual portrait, a diary of some of the darkest days in America’s history and a chronicle of how the first lady spun national tragedy into a lasting legacy for her husband. Before the sitdown, Jackie warns her interviewer that she will be heavily editing the conversion. The published version, to quote the great war satire “In the Loop,” will not be a “record of what happened to have been said but what was intended to have been said.”

Mrs. Kennedy eschews truth in favor of the myth. The reality is that after her husband was shot, his skull ripped open, she sat splattered in his remains, attempting to hold the pieces of him together. Jackie continued to wear the iconic pink dress she wore when her husband was shot — a Chanel knockoff — the rest of the day, despite Lady Bird Johnson’s (Beth Grant) insistence that she change. The First Lady refuses. “Let them see what they’ve done,” Jackie insists. When she returns to the White House later that evening, Jackie washes away his blood. She tries on dresses — while popping pills and drinking — as if deciding who she is now.

These feelings, raw and complicated, are stricken from the record at the subject’s request. Although Jackie smokes constantly, she claims that when it comes to the official version of the conversion, she does not. After Jackie remembers that her husband’s skull was “flesh colored, it wasn’t white,” she retracts a public admission of the horror she has experienced. “Don’t think for a second I’m going to let you publish that,” Mrs. Kennedy says.

These anguished moments don’t reflect the story Jackie wants to tell. This is the interview in which the first lady created the mythos of Camelot, comparing her husband’s presidency to the reign of King Arthur. The president and his wife were both fans of the Broadway musical of the same name, then starring Richard Burton and Julie Andrews, and it reflected how Jackie wanted the public to see their family — as representatives of a timeless royalty, even if short-lived. As a president, Kennedy was undistinguished, a politician who would either be remembered for resolving the Cuban Missile Crisis or initiating it. But as a symbol, Jackie realized that he could achieve the greatness he lacked in office.

In Larraín’s film, style is substance. His cinematographer, Stéphane Fontaine (“Elle”), mixes handheld camera — its subjects so close to the screen that it borders on uncomfortable — with lush tracking shots, such as during the lavish funeral procession. There’s one shot in particular that’s worth the price of admission, and you’ll know it when you see it: The first lady’s somber, searching face is viewed from inside the window of an armored car, juxtaposed with the reflection of mourners on the street. “Jackie” attains a beauty that’s often close to ecstasy.

That commitment to aesthetics is a fitting tribute to a woman — perhaps more than any other person of her era — who understood the power of the image. Throughout her husband’s presidency, the first lady was derided for the money she spent renovating the White House with antiques, which were meant to serve as a tribute to previous administrations. The press, uninterested in symbolism, charged her with wasting taxpayer dollars. Jackie is so fastidious and exacting when it comes to her persona that a reenactment of the famous 1962 tour of her Pennsylvania Avenue home is played for comic value. The first lady’s contrived voice, recalling Katherine Hepburn by way of Stepford, is a testament to the veneer of perfection Jackie worked so hard to maintain.

As the umpteenth actress to play Mrs. Kennedy, Portman wisely doesn’t try too hard to imitate her subject; Jackie’s trademark Long Island brogue slips occasionally. Portman’s performance — wounded yet vibrant, withholding yet brash — nonetheless dominates the film, so much so that you can’t imagine anyone else bringing such grace to such a complicated figure. Throughout “Jackie,” I never forgot the actress playing her, but what’s so surprising and wonderful is that Portman and her director allowed me to view an icon in a new way: as a woman, still so painfully young, forced into the role of a lifetime.

“I never wanted fame,” Jackie explains. “I just wanted to be a Kennedy.” As the film proves, she never had much of a choice in the matter, but at least she got what she wanted. John F. Kennedy is today viewed as one of the country’s great presidents, and that’s due to the woman we are only finally coming to know, even five decades later. It is long overdue.