One show at a time: Keeping TV culturally inclusive is crucial to winning the battles ahead

On TV, life is still reflected in an array of hues and views, a vital countermeasure to real-world divisiveness 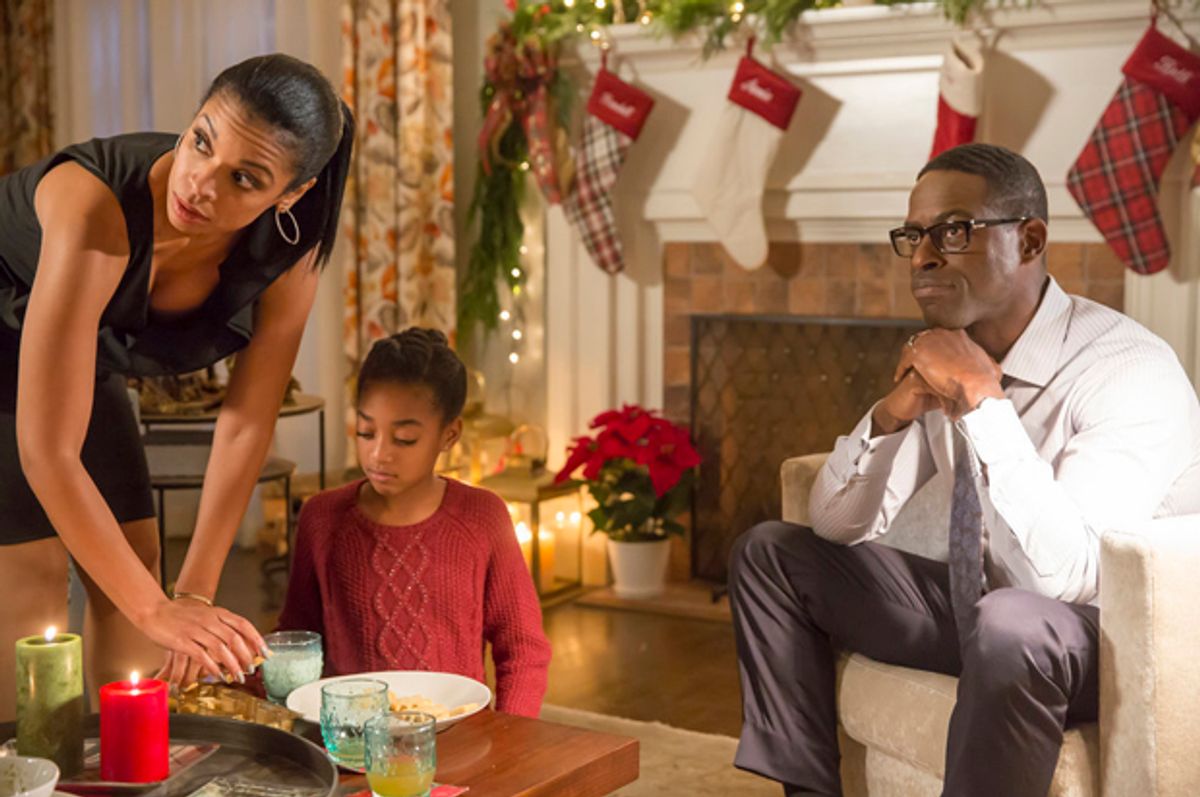 A little over a month from now, a revamp of Norman Lear’s classic 1970s sitcom “One Day at a Time” will premiere on Netflix. The new version still follows the life of a recently divorced mom and her two kids, only in this new iteration, the family is Cuban-American. Justina Machado and Rita Moreno play the leads.

During the same week in January, Fox will premiere “Star,” a midseason entry from “Empire” producer Lee Daniels. “Star” tells the story of a girl group consisting of a white singer, her biracial sister and a black woman. It co-stars Queen Latifah and Benjamin Bratt. Fox is banking on “Star” to find the same kind of success as “Empire,” which is the third highest rated scripted series on television in the 18-49 demographic. “Empire” has a black ensemble cast and includes a main character who is gay.

The upcoming year also includes: Lifetime’s update of the ’80s film classic “Beaches,” with Nia Long stepping into the role originated by Barbara Hershey; an episodic version of the film “Training Day” co-starring relative newcomer Justin Cornwell for CBS; and Fox’s resurrection of the “24” franchise, “24: Legacy,” with Corey Hawkins in the lead role. Each of these black performers is taking on a role originally played by a white actor. (Note: This paragraph has been corrected since the story’s original publication.)

This incomplete list serves to demonstrate how vastly different the world inside our small screens looks compared to the real world, where multiculturalism is under attack.

News channels and social media circulate new stories about racial strife every day; according to the Southern Poverty Law Center 867 hate-fueled incidents motivated by race, religion and sexual orientation have occurred in the weeks following the election. That number is based solely on incidents witnesses and victims reported to the organization and covered by media outlets. One can rightly assume that for every one that we know about, many others have taken place.

But on the small screen, American life is still reflected in a multitude of hues, tones and personalities. And if we are to successfully push back against this poisonous wave of political bigotry and regain any momentum we stand to lose, that has to not only continue but expand.

Earlier in the season I wrote a story about how the entertainment industry’s ideas surrounding diversity -- a problematic term for many reasons -- need to give way to the concept of inclusion. That notion is more important now than, perhaps, ever. Inclusion gives rise to storytelling that captures universal ideas through lenses that aren’t typically represented in mainstream entertainment.

We have a long way to go before inclusion becomes standard industry practice. Diversity, imperfect though that concept may be, is marching across the TV schedule slowly but steadily. A generation of children weaned on “Dora the Explorer” can now watch the thought-provoking, witty “Jane the Virgin” on The CW, powered by extraordinary performances by a Latino ensemble cast.

On cable, FX scored an Emmy possibility in Donald Glover’s “Atlanta,” and OWN found another scripted drama success in Ava DuVernay’s “Queen Sugar.” Both series are created and shaped by African-Americans and feature a cast of black actors, as does HBO’s Issa Rae vehicle “Insecure.”

Granted, the viewership for these shows is modest next to the size of the audiences for most broadcast series or mammoth cable hits such as “The Walking Dead.” But they’ve all been picked up for second seasons.

Next year also could bring a “Sons of Anarchy” spinoff focusing on the original gang’s Hispanic rivals, the Mayans. One certainty is that we'll be seeing Michelle Yeoh, one of Asia’s superstars, at the helm of her own starship on the highly-anticipated CBS All Access series “Star Trek: Discovery.”

ABC’s entire family comedy block, meanwhile, might as well be an alt-right follower's nightmare, with a show centered on an Asian-American family (“Fresh Off the Boat”) leading into a half-hour about a Catholic family with a gay son (“The Real O’Neals”).

That’s just Tuesdays. Wednesday nights feature “The Goldbergs” and the critically-acclaimed “Black-ish” in addition to ABC’s sitcom jewel, “Modern Family.” Which, in case you need to be reminded, focuses in part upon  a gay married couple and their adopted Asian daughter, as well as a May-December marriage between an old white guy and his Colombian wife.

“Modern Family” is still a top 10 show in 18-49, the second highest rated comedy behind CBS’s “The Big Bang Theory,” and it kills in syndication. It’s a little late to build a wall around that one.

Though these series are part of a broadcast system contending with steep audience declines and ever more modest same-day ratings numbers, the fact that they are all still here is encouraging.

As this season of television has proven, putting more minorities in front of the camera as well as behind it is good for business. But telling their stories also serves a higher purpose than mere monetary gain. At a time when the normalizing of hatred is a dire concern, bringing unfamiliar perspectives into millions of living rooms can change the way people think about one another.

Consider fall’s biggest success story, NBC’s “This Is Us.” There are many reasons “This Is Us” is a hit, beginning with its appeal as a family drama at a time when there aren’t many of those on the broadcast TV schedule, and strategic scheduling after “The Voice.”

“This Is Us” is not the invention of a minority creator, mind you. It comes from Dan Fogelman, the guy who gave the world the addictively sweet movie “Crazy, Stupid, Love.” Nor is it a story told from a specifically minority perspective; its principal cast consists of four white characters and an African-American one named Randall, played by Sterling K. Brown.

A cynic could argue that “This Is Us” dances on the edge of some of TV’s queasiest savior tropes concerning white parents adopting black children, and he wouldn’t be wrong. The very fact that Brown’s Randall came to be adopted by a white couple because his drug-addicted father left him at a firehouse further perpetuates harmful stereotypes about black men and fatherhood.

One might further observe that the story's moving portrayal of a racially blended family helps perpetuate the myth that Americans are somehow past racism, and all protests to the contrary are overblown and stirring up trouble where there was none.

The sad fact is, Randall and his family are probably among the few African-Americans many white, middle-American viewers have any semblance of contact with on a regular basis. And as “This Is Us” closes in on its midseason break, the storyline is diving into Randall’s stew of feelings about how his Caucasian parents -- his mother Rebecca (Mandy Moore), specifically -- shaped his identity as a black man.

Randall is not a de-racialized character. But absent a relationship with his birth father, he patterns his notions of what it means to be a family man on the example provided by his adoptive father Jack (Milo Ventimiglia). Jack was a man who made special efforts to connect his son to other African-American boys and men via a martial arts school in their community. But his mother intentionally denied Randall the chance to have a relationship with his real father William (Ron Cephas), who he found later in life and who is now sober. He's also dying.

In flashbacks we saw how damaging that was to William, a man who acknowledged his mistakes but cleaned up and maintained his sobriety. Rebecca was wrong, even if her actions grew out of a desire to protect Randall. And some of the excuses she gives to Jack to prevent Randall from connecting with his birth parents smack of prejudice. (She muses aloud, for example, that they might both be drug addicts.) More than anything, the writers made it clear that Rebecca didn’t want to lose one of her sons.

This plot line can be parsed a number of ways. Mainly it thrives on the tension generated by one character holding a secret over another, a classic family drama catalyst. But this subplot is also very much a story about seeing race, and how that's not necessarily a negative. Randall’s adoptive parents come to understand that it’s not enough to simply love the boy as one of their own in a world that will always view him differently than his white brother and sister.

That this treatment of race relations on a micro level is written as just another part of this family’s life, as opposed to aping a maudlin Very Special Episode format, creates a universally affecting narrative. And it’s connecting with viewers. The most recent new episode of “This Is Us” attracted a larger audience than the show’s premiere; thus far, the drama is averaging close to 9.4 million viewers a week.

“This Is Us” is not executing Randall’s story in a flawless fashion, to be honest. But it deserves notice for what it’s attempting to do, and broadcast television needs more producers to be as fearless in bringing such stories to prime time.

The hope is that programming executives will commit to exposing the widest audiences to characters of different backgrounds, people who don’t necessarily have cushy corporate jobs and a big house in a nice school district. Let’s see more portraits of working-class life like the ones portrayed so intricately in “Queen Sugar” and “Atlanta.”

That these shows exist at all is heartening, but they and others are thriving on niche networks. Inclusion is far more common on streaming services such “Marvel’s Luke Cage” and “Master of None” on Netflix, or “The Mindy Project” on Hulu, or “Transparent” on Amazon. Great shows, if you can afford the subscription required to get them. Otherwise they might as well be hidden from the masses.

We need broadcast television to add more images of American life in all its facets to the schedule in 2017 and beyond, as much as we need cable programmers and streaming services to keep doing so. Presenting engrossing and varied perspectives of American life on the small screen may be the most effective countermeasure to the frightening multicultural backlash that's threatening to roll back society’s hard-won advances. In an ideal world, the schedule would be flooded with fresh stories of inclusiveness.

But if the industry can do its part to keep multicultural progress moving forward, even at the rate of just one show at a time, that’s still preferable over retreating into the homogeneous black-and-white fantasies of decades past.