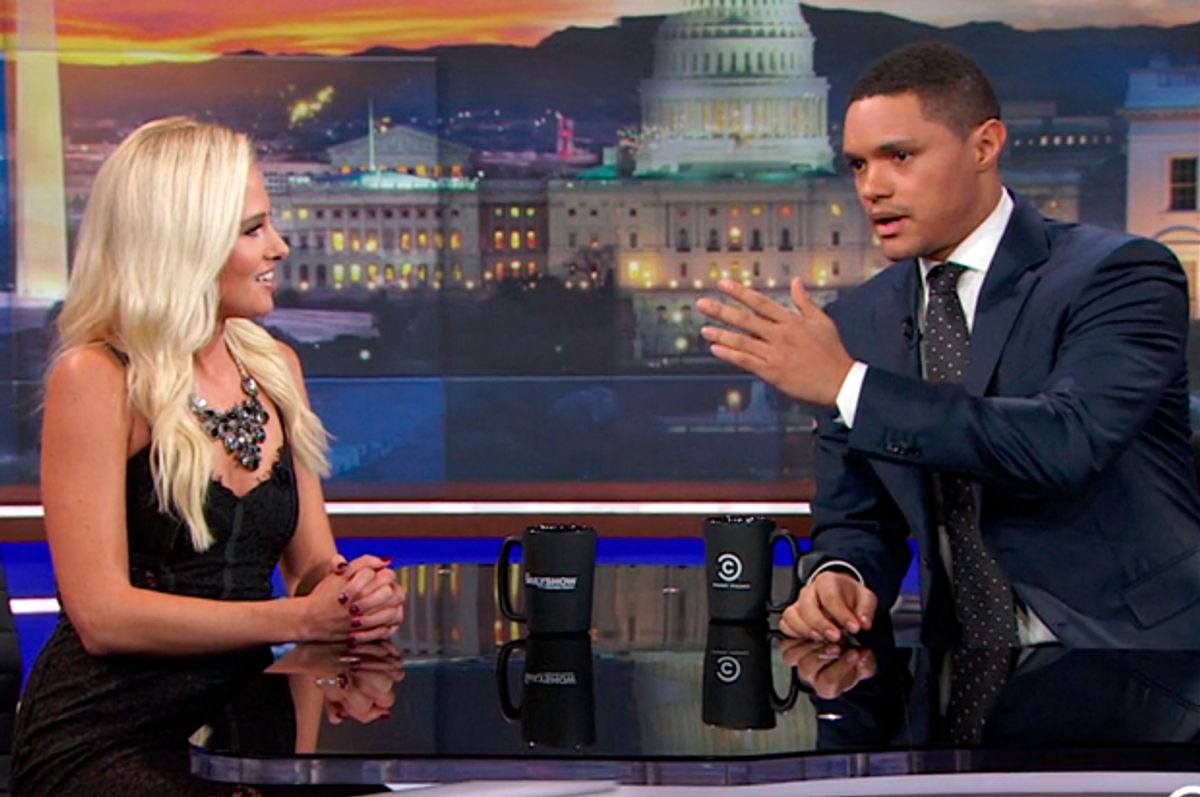 Kudos to Trevor Noah. Really. It would take a Buddhist monk three Xanax and an Enya CD to remain as calm as Noah did on Wednesday throughout his interview with fiery conservative commentator Tomi Lahren.

This is what I heard from Lahren: vitriol, hypocrisy and prejudice-fueled misapprehension.

Noah made clear that he heard these things too. But rather than erupt or coax his audience (who did him no favors by laughing and applauding in all the appropriate moments), he remained measured and did what reconciliatory liberals and moderates are calling for in the wake of Trump’s victory: He listened, earnestly trying to understand the other side and find common ground.

The effort proved futile. Lahren’s refusal to back down is a point of pride; she said it’s how she gives voice to her voiceless Middle American audience. Her passionate obstinacy made for an entertaining interview but one that was ultimately no more enlightening than a Bill Maher roundtable. Lahren regurgitated the same points — that Hillary Clinton is a criminal; that Black Lives Matter is a radical militant movement; that she doesn’t see color — that have made her popular with her base and an almost too-easy target for left-leaning satire shows like Noah’s.

Several smart critics have contended that despite the discussion’s shortcomings, this was a big step and the right tone for Noah. It is hard to imagine more pointed satirists like Jon Stewart, John Oliver, or Samantha Bee engaging in such a civil and condescension-less discussion with such an abjectly misguided belligerent. Though Noah didn’t break through, he allowed viewers to imagine a scenario where he might. And in so doing, it was the first time his lack of liberal zeal was a strength rather than a weakness.

The problem with this line of thinking, though, is that it presumes that there exists an alt-right figure who is willing to wholeheartedly attempt to meet Noah halfway and engage in a nuanced conversation that does not pervert facts and reason. It’s a notion that raises questions about what it means to actually listen. Donald Trump forged his campaign nearly 18 months ago. What misunderstanding is left? Some of Trump’s voters were inspired by bigotry. Some were inspired by his grandiose promise of system-shaking change. Some were hopeful that he could bring jobs back to middle America and ease their economic anxieties. Some were simply more distrustful of Hillary Clinton than of Donald Trump. Trump’s voters were not a monolith and they were not a majority.

Rather than try to understand why Trump’s voters chose him, Noah was trying to understand the ideological crux of Trump’s base. How do those offended by Colin Kaepernick kneeling for the national anthem prefer that he convey his dissatisfaction with the nation’s treatment of black people? If someone is to hold the Black Lives Matter movement responsible for the actions of a few rogue radicals who associate themselves with the movement, does that mean that Lahren is responsible for the actions of any inspired viewer of her show?

Noah didn’t get satisfactory answers to these questions because he and Lahren perceive reality in fundamentally different ways. Noah may speak eight languages, but he is not fluent in the vernacular of feelings. And the linguistics of feelings do not require that 4 is the product of 2 x 2.

Plenty of liberals and moderates, John Oliver most brilliantly, have deciphered this brand of conservative communication. Newt Gingrich denying the fall of national crime rates with the evidence that the American people don’t feel as though the crime rates are down. Paul Ryan saying the “whole economy feels stuck.” Trump framing Mexican immigrants as criminals. The problem has been that no one in the mainstream has figured out how to respond in the same language.

Instead, liberals and moderates have countered these claims with fact-checks — enlisting the fact-checkers was Hillary’s favorite retort during the debates. They have explained that crime rates can be up in a few major American metropolises but down nationwide. They have explained that the economy is complex but in much better overall shape than it was in eight years ago. And they have explained that though you may know of an illegal immigrant who committed a crime, on a macro scale illegal immigrants are far less likely to commit crimes than American-born citizens. But these arguments aren’t emotionally satisfying. They remove the easy answers to America’s ills.

And so, this past Thursday night, when Harvard held their traditional post-election forum between the various candidates’ aides, Corey Lewandowski had a point when he blamed the media for taking Trump too literally — or, you know, sort of. He said, “This is the problem with the media. You guys took everything that Donald Trump said so literally. The American people didn’t. They understood it. They understood that sometimes — when you have a conversation with people, whether it’s around the dinner table or at a bar — you’re going to say things, and sometimes you don’t have all the facts to back it up.”

The abdication of fact-based rhetoric, of course, puts the media in an impossible position and allows Trump to slither out of any incendiary remark by claiming sarcasm. But at a certain point — now might be a good time to start — the media needs to complement its game of fact-check whack-a-mole with stronger, more personal appeals to pathos.

While preaching to the choir surely isn’t the best method to effect change, neither is civilly pointing out failures of logic. If Trevor Noah wants to find some common ground, he can keep calm, but he’ll have to unsettle his ideological opponents in ways that they can feel rather than misapprehend.