Trump meets Kafka: How will the president-elect's bewildering immigration pledges play out? 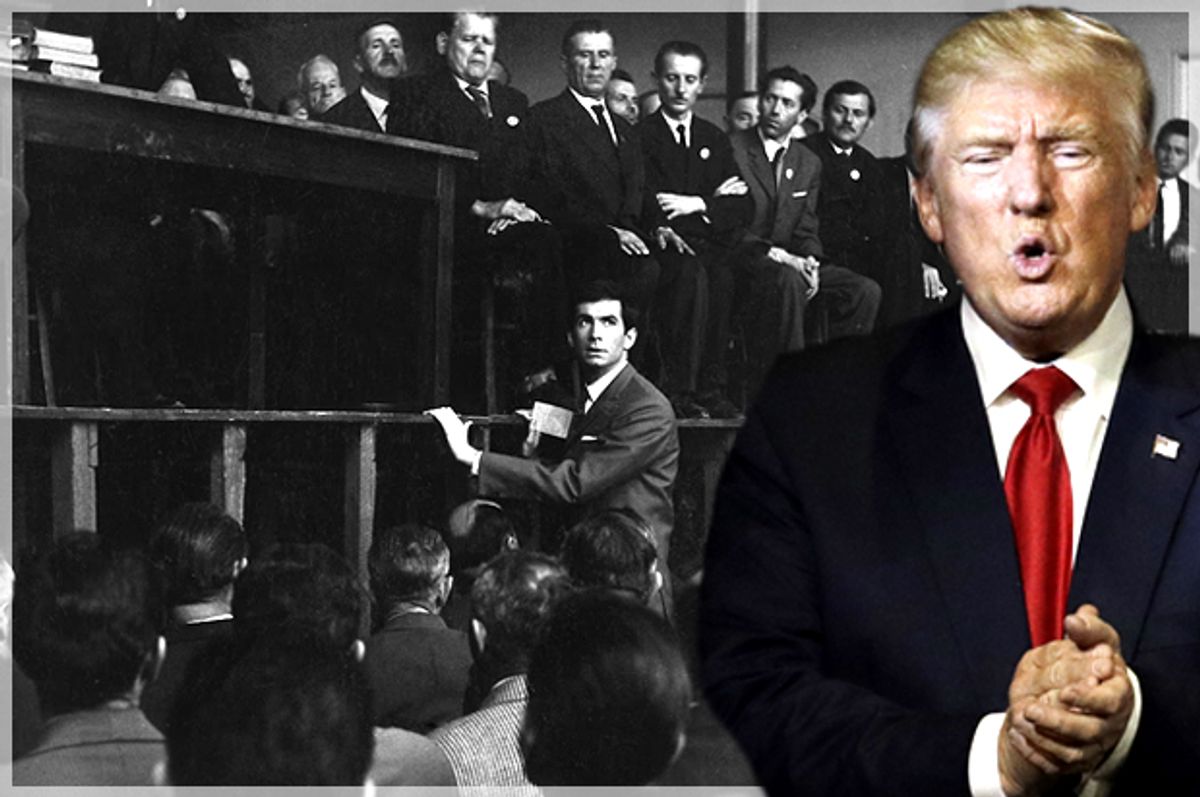 Josef K., the main character in Franz Kafka’s "The Trial," finds himself caught up in a nightmare scenario. He is visited in his room by agents who tell him he is being indicted but cannot or will not relay the exact nature of the charges against him. They leave him with a feeling of dread, foreboding and uncertainty. He tries throughout the novel to avail himself of the legal process, but without success. At the end of the book, his sentence is carried out. He still has no understanding of the reasons behind his quasi-legal, surreal and unjust “prosecution.”

Undocumented immigrants, including refugees and the class of immigrants known as "DREAMers," find themselves in a Josef K. situation faced with the incoming administration of Donald Trump. They are in a state of confusion and dread, fearing the worst and not understanding the possibilities. Even if they do recognize the possibilities, they do not understand how precisely they will be affected. In this article, I describe a few possibilities that Trump is currently considering. As will emerge, the main worry is the lack of due process. What Josef K. felt was exactly that: the lack of any safeguards to protect him built into the system. (The original German title of Kafka's book is "Der Process.”) The concern now is that there will be a “process,” but in name only.

A federal program was created in 2002 called NSEERS, which stood for the “National Security Entry-Exit Registration System,” also known as “Special Registration.” As we know from a report compiled by Penn State Law and Rights Working Group, NSEERS affected more than 80,000 people and resulted in 13,000 being placed in removal proceedings. The program targeted men and boys from 25 countries. All were Muslim-majority countries except for one, North Korea. (So while NSEERS was never defined as a "Muslim registry," that's fairly accurate.)  The program required non-citizens to register when entering the U.S. and to report for periodic interviews with immigration authorities where they would be fingerprinted, photographed and interrogated. Violators were subject to arrest, fines and deportation. The program was discontinued in 2011.

NSEERS was a failure. No one was ever prosecuted for terrorist offenses as a result of this program, nor were there any apparent identifications of suspected terrorists. As experts have pointed out, most terrorist attacks in the U.S. are carried out by U.S. citizens in any event. Thousands of people were singled out merely based on national origin and for no other reason. It was a low point for the rule of law and the Constitution. The concern is that those administrative regulations are still in place and could be trotted out by a new administration.

What is of more concern than a reincarnation of NSEERS or some similar program is the question of how such programs would be implemented. One concern is that agents of the government will use such programs to channel people they don't want to remain in the country into removal proceedings, regardless of whether they pose any risk. During a removal proceeding, an individual's chances for success are reduced greatly if he or she cannot afford or obtain competent legal counsel. Many could be deported if challenges are not made to NSEERS-like removal cases. Lawyers can contest a person's removal in many ways: They may argue their clients didn’t willfully fail to comply, they may raise legal defenses or they may argue their clients were improperly placed in proceedings before an immigration judge.

Another focus of the new Trump administration will be on “criminal aliens,” as we have seen from his post-election promise to deport 2 million to 3 million people as soon as he takes office. There is a significant possibility of abuse by the new administration when targeting this group of immigrants, for several reasons. Under the Obama administration’s Priority Enforcement Program (PEP), as laid out in Homeland Security Secretary Jeh Johnson’s policy memorandum of Nov. 20, 2014, there are currently three categories of targeted persons: Priority 1, individuals deemed threats to national security, border security and public safety; Priority 2, individuals who have committed multiple crimes or have recently violated immigration laws; and Priority 3, individuals with a final order of removal dated on or after Jan. 1, 2014.

The proximate problem now is that under a Trump administration these priorities could be scrapped in favor of a much wider net, and new priorities put in place. These new priorities may be over-inclusive or unfair and may not serve to protect public safety at all, instead resulting in massive family disruption, needless suffering, and hardship.

For Trump to get anywhere near his projection of deporting 2 million to 3 million immigrants, he will have to rely on such overly inclusive policies and practices. The most recent Homeland Security data, from a 2012 report to Congress on “criminal aliens,” indicates that about 300,000 were estimated to have felony convictions and about 390,000 were estimated to be “serious misdemeanants,” meaning that they had been convicted of a misdemeanor and sentenced to 90 days or more of incarceration. The highest imaginable figure is around 1.9 million, if you include everyone with any criminal convictions whatsoever, including petty offenses. To target that entire population of 1.9 million, when many are subject to relief from deportation and many are already here lawfully, would be a wasteful and futile effort designed entirely for political expediency and effect. Vast resources would have to be spent on enforcement, detention and adjudication of these claims -- and detaining anything close to that number of people for any amount of time would be a logistical nightmare.

These due-process concerns are exacerbated by potential abuses surrounding a program known as expedited or administrative removal under Immigration and Nationality Act (INA) section 238(b). No proceedings need be conducted before an immigration judge. Under that section, ICE can make its own determination and issue an “administrative order of removal” with little to no oversight. Those subjected to this program are non-lawful permanent residents who have been convicted of an “aggravated felony,” a technical term that can be difficult to parse under the INA. Legal counsel will be crucial to those issued such orders of removal, which must be quickly challenged in the courts before they can be enforced.

Finally, both as a candidate and as president-elect, Trump has promised to rescind executive actions such as Deferred Action for Childhood Arrivals, or DACA. This would be most tragic if it comes to pass. The DACA program has benefited hundreds of thousands of young people who came to the U.S. before age 16, have completed or are enrolled in school and meet the program's other stringent requirements. Any plan for potential DACA revocation might involve the use of information gleaned from initial DACA applications and renewals, used to target the applicants themselves or family members. This would contradict a 2012 guarantee that no information would be used against the applicants or their families, unless fraud were found. To renege on that promise would -- and should -- result in outrage and litigation. There is no more deserving group than these DACA Dreamers who have come so far -- as I have personally witnessed -- in the four years since the program’s inception.

Any enforcement effort that unfairly and improperly targets DACA recipients, turning a program meant to protect them into an instrument of persecution, would be a most Kafkaesque move on the part of a Trump administration. It would mean betraying a promise made by our government to a uniquely vulnerable group of people. Such a nightmare scenario would not be worthy of our democracy. It would also show an utter lack of understanding about how best to enforce immigration. Estoppel, the legal principle that precludes someone from asserting something contrary to that person's previous actions or statements, is not easy to prove against government actors. But in especially egregious cases it remains available, and any federal attempt to turn DACA upside down would surely qualify as egregious, not to mention immoral.

There are other potential immigration issues that will populate our headlines in the coming months and years. I will remain silent for the moment on those. These three -- a revived or renewed NSEERS, the question of "criminal aliens" and 238(b), and the status of DACA immigrants -- are the most salient issues to date. How President-elect Trump chooses to proceed will tell us a lot about how nuanced and sensitive he can be. I am hopeful that despite the rhetoric, cooler heads will prevail. Safeguards still exist, even under NSEERS and expedited removal. We can and should work toward reminding ourselves and others that those safeguards of due process can protect us, and the most vulnerable people in our society, from a Kafkaesque nightmare that need not come to pass.