While many Democrats prepare to fight Trump, some facing re-election in 2018 are already willing to appease him 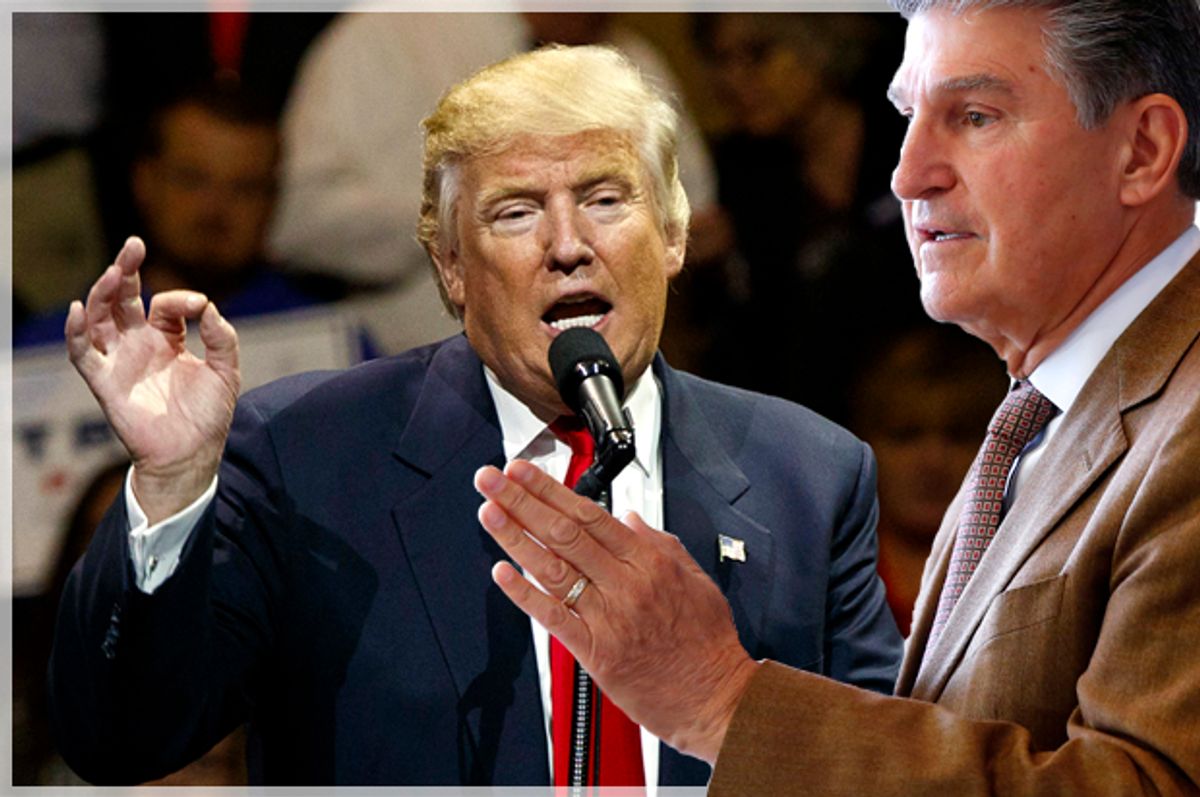 While congressional Democrats were certainly slow to come to grips with Donald Trump’s election and therefore appeared hesitant to back the calls for resistance that flooded the streets in major American cities in the immediate aftermath, they’ve since embraced their role as the loyal opposition.But even as most Senate Democrats gear up for confirmation battles with a whole host of questionable Trump Cabinet picks, some of their Democratic colleagues are already willing to kowtow to the president-elect’s most fundamental decisions.

Incoming Senate Democratic minority leader Chuck Schumer recently backed away from his early willingness to work with the incoming Trump administration, opting instead to endorse a strategy of committed opposition.

“President-elect Trump promised that he was going to clean up the swamp,”  Schumer told The New York Times this past weekend. “And a whole lot of his nominees have had their career in the swamp.” Just weeks earlier, the New York Democrat gathered stunned Senate Democrats by announcing, “When we can agree on issues, then we’re going to work with" Trump.

But with Trump's selection of billionaire charter school advocate Betsy DeVos to head the Department of Education, Goldman Sachs executive Steve Mnuchin to head the Treasury Department and a tycoon known as "the foreclosure king" to head the Commerce Department, Trump has energized most Senate Democrats to action.

Several Democratic lawmakers told Politico that they could force as much as 30 hours of debate and procedural votes on each of Trump's Cabinet nominees, which could take weeks off the Senate calendar and sap the momentum of Trump’s first 100 days:

Some appointees, like Elaine Chao’s nomination to lead the Transportation Department, are unlikely to be delayed. But Democrats will force retired Marine Gen. James Mattis to get 60 votes for a legislative waiver to become secretary of defense, and they're singling out at least four other nominations for strict scrutiny.

Democrats are likely to require roll call votes and possibly delay the nominations of Betsy DeVos to be secretary of education and Tom Price to to be Health and Human Services secretary, in addition to Mattis, Mnuchin and (attorney general pick Sen. Jeff) Sessions.

Ohio Sen. Sherrod Brown argued for a strategy of Democratic obstruction to a Trump agenda by pointing to Republicans' past intransigence. “We’re going to help them confirm their nominees, many of whom are disqualified? It’s not obstruction, it’s not partisan, it’s just a duty to find out what they’d do in these jobs," he said. Brown pointed out that Republicans have "been rewarded for stealing a Supreme Court justice,” referring to the nearly yearlong delay of hearings on President Obama's nominee to succeed deceased Supreme Court justice Antonin Scalia.

Still, nearly all the five Democratic senators facing re-election in 2018 in states that strongly supported Trump — by 19 percentage points or more — apparently disagree with their more progressive colleagues and have rushed to signal their willingness to cooperate with the new regime.

“That’s just bullshit,” West Virginia Sen. Joe Manchin, whose state supported Trump by 42 percent, said of his fellow Democrats' strategy of opposition. "I'm going to help [Trump] when I can. But I'm going to be holding him accountable when I need to," he added.

Manchin announced in a statement on Monday that he was "honored and humbled" to have a "wide-ranging and constructive conversation" with Trump last week.

"I am willing to work in a bipartisan manner to find commonsense solutions to the serious challenges we face," said Manchin, whose name has now been floated for two different roles in the Trump administration as  energy secretary and secretary of state.

Pointing to his colleague from Alabama and Trump's choice to lead the Department of Justice, Republican Sen. Jeff Sessions, Manchin told Politico, “My God, I think we should have an attorney general in place on Jan. 20. I sure do believe that." Other Democrats have objected to Sessions' naming as the top law enforcement officer in the nation because he was once denied a federal judgeship over accusations of racism.

Manchin has already sided with the president-elect on another controversial topic, reportedly saying flag burning is "a first amendment right but you do it in front of me, I'm going to beat the hell out of you." Manchin's comments came after Trump tweeted about this issue, saying people who do so should potentially face a year in prison or even the loss of their citizenship.

And Manchin was not the only Democratic senator to meet with the president-elect last week.

North Dakota Sen. Heidi Heitkamp was quick to suggest that she is ready to work with Republicans on legislation to invest in “clean coal” technologies, as she praised a decision to boot oil pipeline protesters from Standing Rock. Heitkamp was one of the first Democrats to meet with the president-elect and his transition team at Trump Tower last week. Trump won North Dakota by more than 36 points and there's speculation he is considering Heitkamp for secretary of agriculture or energy.

"Obviously I believe that it's a wonderful opportunity for me to talk about agriculture and energy and the challenges we have in rural economies," Heitkamp said in a statement following her meeting last Friday. "Whatever job I do, I hope to work with the president-elect and all of my colleagues in Congress on both sides of the aisle to best support my state."

Speaking to The Hill late last month about her "clean coal" bill, which has bipartisan co-sponsors, including Democrats from states that Trump won like Bob Casey from Pennsylvania, Heitkamp made clear her "priority is standing up for North Dakota, not party politics.

Indiana Sen. Joe Donnelly, who is also up for re-election in 2018  and who represents a state that went for Trump by 19.3 percentage points, has already said he is ready to work with the incoming Trump administration on military mental health care issues, curbing the exodus of U.S. jobs to foreign countries and combating the opioid epidemic.

"We can’t just say ‘no’ because the idea comes from the other side of the aisle,” argued Montana Sen. Jon Tester last week. Tesler has long signaled a willingness to work with Trump. He chairs the Democratic Senatorial Campaign Committee that failed to orchestrate his party's wresting control of the upper chamber from the GOP.

In May, Tesler said about Trump that "he’s got some pretty goofy opinions, but hopefully we’ve got some stuff we can work on,” Tesler is now up for re-election in a state that preferred Trump by 20 points.

The problem for Democrats is that while a recent poll found that nearly two-thirds of Democratic voters want the party to “stand up” to Trump, “even if less gets done in Washington,” of the 25 Democrat senators up for re-election in 2018, 13 are from states that voted for Trump.