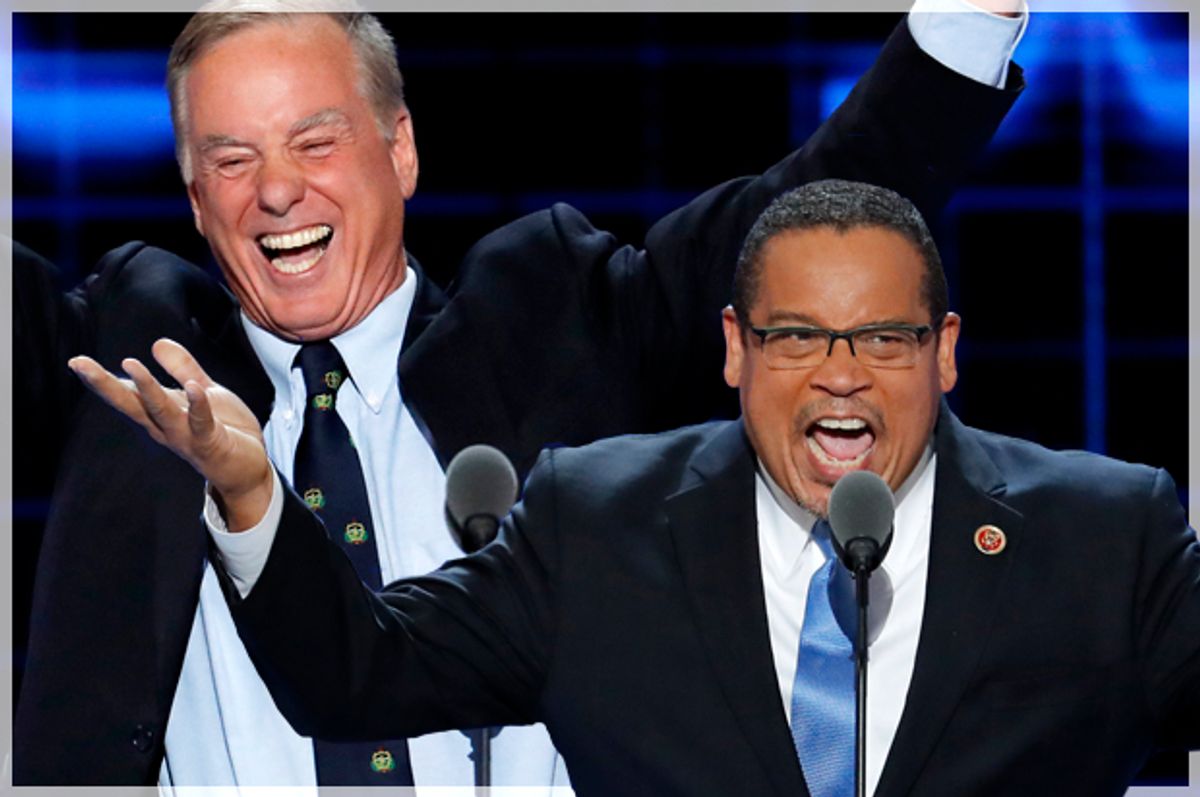 The contest over who will head the Democratic National Committee became even more acrimonious over the weekend. Controversy continued to swirl around the apparent leading candidate, Rep. Keith Ellison of Minnesota, while former DNC chairman Howard Dean dropped his bid to lead the party organization for a second time.

Top Democrats and progressives appeared to be split over their reactions to an Anti-Defamation League statement that Ellison had made “disqualifying” remarks during a 2010 speech, in which he appeared to say that pro-Israel forces have a disproportionate effect on American foreign policy. The Minnesota congressman, who is Muslim, has denied having any anti-Semitic views or intentions. He has said his speech, taken as a whole, was meant to compliment the effectiveness of pro-Israel activist organizations but also to criticize certain policies of Israel with which he disagrees.

“I just want the United States to have a lot of friends. And to be in a position with the friend to say — you are wrong and you must stop,” Ellison can be heard saying in the full recording of his speech, which was released by a conservative anti-Muslim group after initially releasing only a few seconds.

His current interpretation of an old speech seemed persuasive enough to J.J. Goldberg, an editor at large for the prominent Jewish American newspaper The Forward, who wrote a column that mostly defended Ellison.

“He just said he wants the U.S. to be friends with Israel. To what he thought was a closed audience of Muslim activists,” Goldberg wrote.

The congressman was also defended by one of his most notable Jewish endorsers, Sen. Chuck Schumer of New York, who will lead Democrats in the Senate next year. In a written statement, Schumer said he continued to support Ellison:

"I stand by Rep. Ellison for DNC chair. We have discussed his views on Israel at length, and while I disagree with some of his past positions, I saw him orchestrate one of the most pro-Israel platforms in decades by successfully persuading other skeptical committee members to adopt such a strong platform."

Ellison was also defended by J Street, a left-of-center Jewish-oriented nonprofit that defines itself as "pro-Israel" and "pro-peace" that has often been critical of Israel’s right-wing government in the past.

“Attempts to paint Rep. Ellison as anti-Israel or anti-Semitic aid a concerted and transparent smear campaign driven by those whose true objections may be to the Congressman’s religion, strong support for the two-state solution and/or concern for Palestinian rights,” the group said in an online statement. “These opponents seek to unearth the slightest inartful statements from decades in public life, take them out of context and use them as a weapon to silence responsible and important voices like Rep. Ellison’s.”

But Ellison, who has been endorsed by scores of big-name elected officials, has also come under attack from other party bigwigs and influential forces. The New York Daily News, which is owned by real estate developer Mort Zuckerman, published an editorial on Thursday calling Ellison "unfit for the chair." Haim Saban, a prominent Democratic donor who gave more than $12 million to a political action committee supporting Hillary Clinton’s presidential run, is also dead set against the Minnesota congressman.

“Keith Ellison would be a disaster for the relationship between the Jewish community and the Democratic Party,” Saban said at an event he sponsored at the Brookings Institution on Friday. “If you go back to his positions, his papers, his speeches, the way he has voted, he is clearly an anti-Semite and anti-Israel individual.”

Pundit and attorney Alan Dershowitz has also gone after Ellison, saying that while he views him as “a decent guy,” the DNC should not appoint him because Ellison is too liberal and his voting record is not supportive of Israel.

According to Dershowitz, Ellison “represents the extreme Left-wing of the Democratic Party, just when the party — if it is to win again — must move to the center in order to bring back the voters it lost to Trump,” he wrote in an op-ed for a Jewish wire service.

“Ellison’s voting record also does not support his claim that he has become a 'friend' of Israel," Dershowitz continued. "He was one of only 8 Congressmen who voted against funding the Iron Dome program, developed jointly by the US and Israel, which helps protect Israeli civilians from Hamas rockets.”

Onetime Vermont governor and presidential candidate Howard Dean, who could have presented a serious challenge to Ellison’s bid, removed himself from consideration late on Friday at a DNC meeting in Denver, saying he was trying to preserve party unity.

“We cannot allow this to be a proxy fight between Bernie Sanders’ people and Hillary Clinton’s people,” he said in a recorded video message to party officials. During the 2016 Democratic primaries, Dean supported Clinton while Ellison backed Sanders.

In a subsequent interview with MSNBC, Dean took a backhanded swipe at his party’s elderly leadership and said that he felt like he was too old for the job. “I know Nancy Pelosi just won re-election, I think she’s great. I think I would have been great. I think it’s time for a new generation.”

Ellison also faces criticism from Democrats who fear he would not devote sufficient time to rebuilding the party since he is supposed to be a full-time member of Congress. Speaking with MSNBC, Dean said that he would not support Ellison unless he resigned his office. “I do not support Keith as long as he has his congressional seat,” he said.

Despite Dean’s wishes that the DNC race “should not be an ideological fight,” at least some progressives appear to see the contest in those terms.

On Nov. 28, Bernie Sanders’ wife, Jane O’Meara Sanders, retweeted a comment from pundit Cenk Uygur who argued that “Establishment Democrats are leaking negative stories against @keithellison like crazy. Funny how they NEVER fight Republicans this hard.”

Other Sanders supporters are trying to counter the big money push against Ellison by raising funds online that will be donated to the DNC only if Ellison becomes the organization’s chief. At press time, the effort had raised $21,000 toward its $30,000 goal.