Donald Trump's Taiwan call was all part of the plan, his transition team says 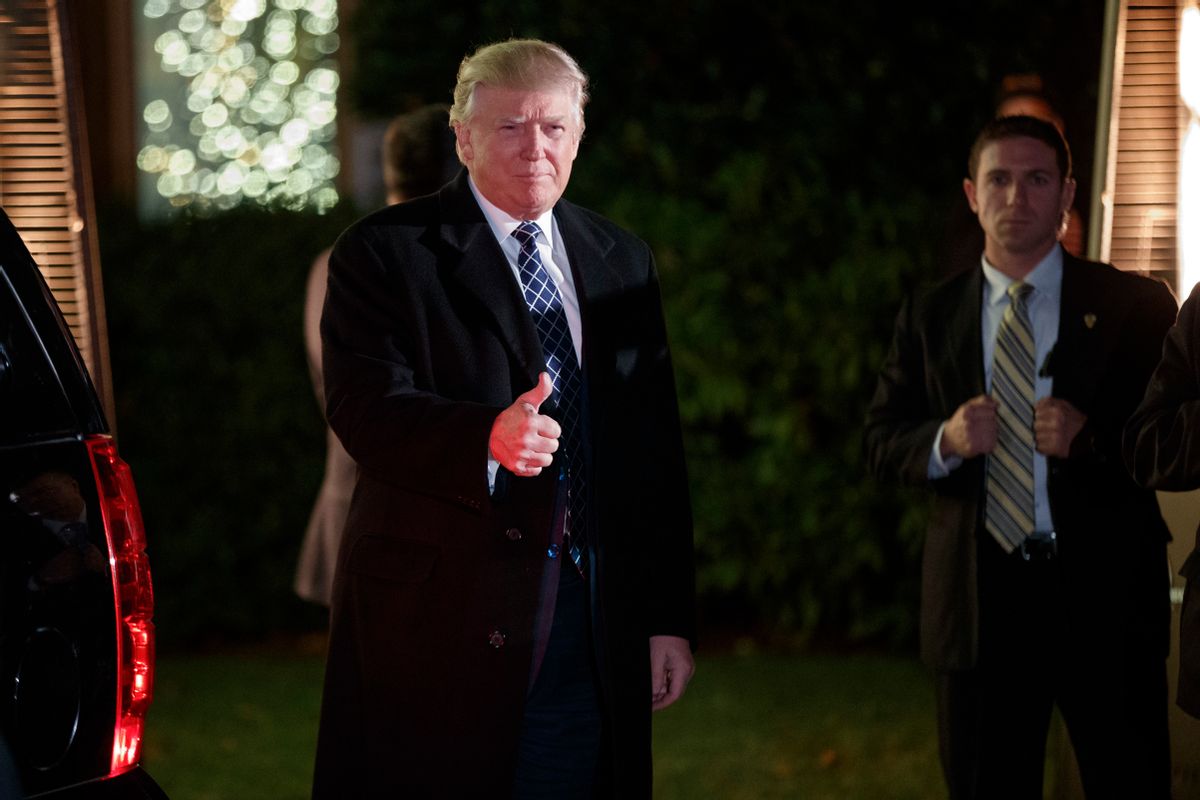 President-elect Donald Trump gestures toward reporters as he arrives for a party at the home of Robert Mercer, one of his biggest campaign donors, Saturday, Dec. 3, 2016, in Head of the Harbor, N.Y. (AP Photo/Evan Vucci) (AP)
--

It turns out that President-elect Donald Trump's spontaneous call to Taiwan wasn't so spontaneous at all.

According to a report by The Washington Post on Sunday, Trump's phone call with President Tsai Ing-wen of Taiwan was deliberately planned in order to demonstrate that Trump intends on breaking with decades of foreign policy tradition. The Post cites sources "involved in the planning" of the call who claim that, despite the Trump team's initial claim that it was a spontaneous congratulatory call, Trump's foreign policy advisers knew that this was the first communication between the leaders of America and Taiwan since 1979 and prepared it in advance as part of his strategy for engagement even before he officially won the Republican presidential nomination.

The President of Taiwan CALLED ME today to wish me congratulations on winning the Presidency. Thank you!

Interesting how the U.S. sells Taiwan billions of dollars of military equipment but I should not accept a congratulatory call. — Donald J. Trump (@realDonaldTrump) December 3, 2016

Did China ask us if it was OK to devalue their currency (making it hard for our companies to compete), heavily tax our products going into..

their country (the U.S. doesn't tax them) or to build a massive military complex in the middle of the South China Sea? I don't think so!

This new information comes out only a day after The Guardian reported Saturday that Trump had a phone conversation with a Taiwanese businesswoman about a possible investment in building luxury hotels in Taiwan's new airport development. The Guardian claimed that a woman known only as Ms. Chen met with Mayor Cheng Wen-tsan of Taoyuan, a city in Taiwan, and "said she was associated with the Trump corporation and she would like to propose a possible investment project in the future, especially hotels,” according to an official who spoke with The Guardian on condition of anonymity. This official also claimed that Chen has not been in touch with the Trump team since.

Much of the concerns about Trump's foreign policy toward Taiwan prior to this phone call involved the possible harm he could do, rather than the idea that he would take a major diplomatic risk to show support. As Michael O'Hanlon of the Brookings Institute wrote in The Wall Street Journal in July, Trump's isolationist position on the Pacific Rim — including the argument that America should withdraw its military bases from Japan and South Korea so that those nations can defend themselves —- posed a serious threat to Taiwan's independence from mainland China.

"Absent bases in Japan, the U.S. cannot realistically deter Chinese military attacks on Taiwan," O'Hanlon wrote. "This reality could lead China to contemplate the use of force with much less hesitation than it has shown to date."

O'Hanlon also noted that this could prompt Taiwan to develop nuclear weapons as a means of deterrence, although China has warned that any Taiwanese pursuit of a nuclear weapon could be used as grounds for an invasion.

China still refuses to recognize Taiwan as an independent country, and although America improved its relationship with mainland China after Richard Nixon's famous visit there in 1972, it also pledged itself in the 1979 Taiwan Relations Act to help Taiwan defend itself against invasions by China, including the possible involvement of the American military in the conflict.

Taiwan also expected to benefit from the Trans-Pacific Partnership trade deal, which excluded China. With Trump expected to pull America out of TPP, China's economic influence in Asia is expected to grow.