Republicans want to convince Americans than Donald Trump's conflicts of interest are no big deal, but they are 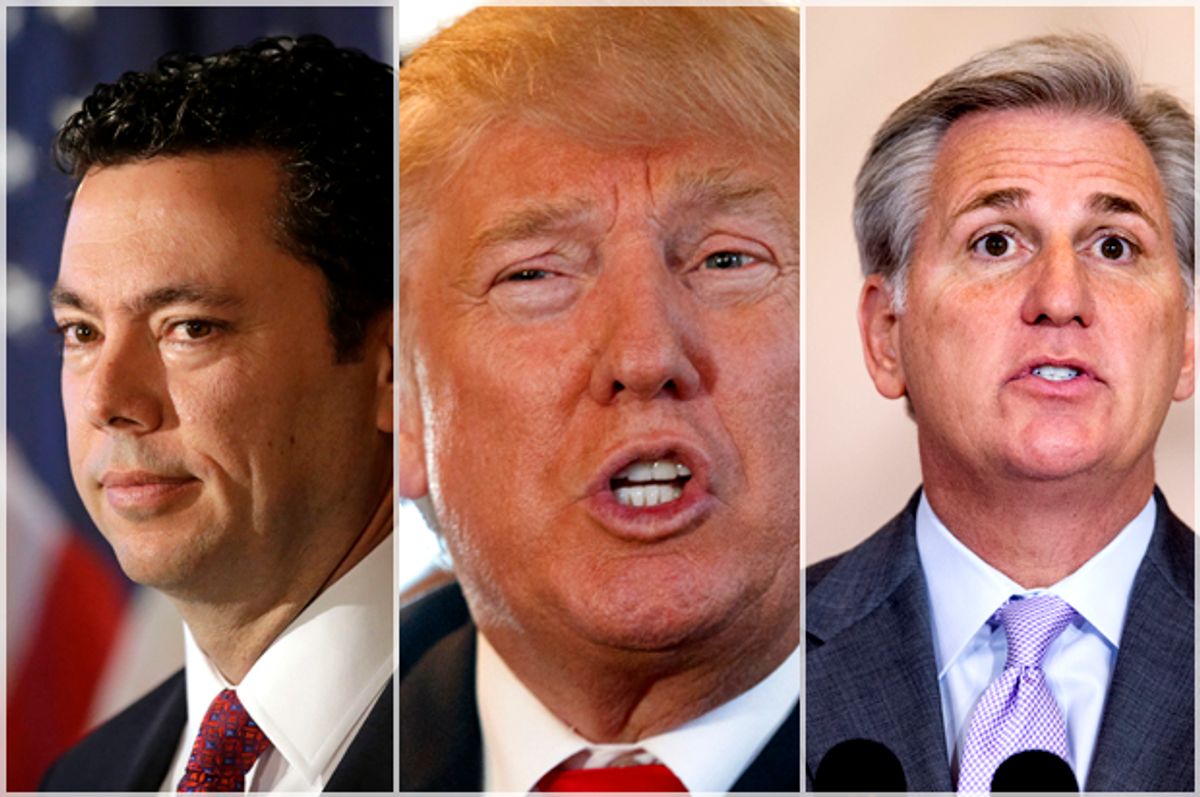 Republicans are trying to downplay President-elect Donald Trump's potential conflicts of interest, even if they turn out to be illegal — and unconstitutional.

As Politico reported on Monday, a litany of Republican leaders and political operatives are spinning concerns over potential conflicts-of-interest as overblown, partisan, and even anti-success, ignoring the legitimate legal issues that would exist if some of these stories prove to be factual.

“This is a great test case between the pre-Trump and post-Trump worlds,” said former House Speaker Newt Gingrich to Politico. “In a pre-Trump world dominated by left-wing ideas, anyone successful is inherently dangerous and should be punished for trying to serve the country.”

Gingrich also added that “the American people knowingly voted for a businessman whose name is inextricably tied to his fortune . . .  I’d say to the left wing, get over it.”

Rep. Jason Chaffetz, R-Utah, who as chairman of the House Oversight and Government Reform Committee has doggedly pursued many of the scandals associated with Trump's former rival Hillary Clinton, told Politico that Trump is “moving in the right direction” by making it clear that his business empire will be “more than arm’s length away.” Chaffetz also argued that the Trump team is "keenly aware" of public perceptions about conflicts of interest but argued that “it is a little ridiculous to send me six letters before he’s even been sworn in to go on, essentially, fishing trips. That’s not what we do.”

“I take anything in the Constitution very seriously. I don’t want to leave any misinterpretation to you," McCarthy said. "But I’m just saying, he hasn’t been sworn in yet.”

Chris Wilson, a Republican strategist who worked for Ted Cruz's presidential campaign, described Democratic concerns about Trump's possible conflicts of interest as "asinine" and argued they could even be self-destructive.

“If there was a situation that came up in which later there was a true conflict of interest, that created a dangerous national security situation, the problem is now nobody would believe them," Wilson told Politico, before adding that "they’re just jumping into it so quickly and on such a stupid issue that it’s almost embarrassing to watch."

Trump has a number of potential conflicts of interest that have raised concerns. As The Atlantic reported on Thursday, these include reports that, when Trump accepted a congratulatory phone call from Turkish dictator Recep Erdogan after winning the election, Trump let Erdogan know that he had been praised by Mehem Ali Yalcindag, whose father-in-law owns a holding company that operates the Trump Towers in Istanbul. That's the towers where Trump admitted to Steve Bannon (back when he still worked at Breitbart) in December 2015 that “I have a little conflict of interest ‘cause I have a major, major building in Istanbul. It’s a tremendously successful job."

If these conflicts of interest or other similar ones do indeed have basis, and if Trump has or in the future does use his relationships with foreign leaders to personally enrich himself, this would constitute a violation of the Emoluments Clause of the Constitution. As Article I, Section 9, Clause 8 of the Constitution reads, "No Title of Nobility shall be granted by the United States: And no Person holding any Office of Profit or Trust under them, shall, without the Consent of the Congress, accept of any present, Emolument, Office, or Title, of any kind whatever, from any King, Prince, or foreign State."