The first time he told me he loved me, a crowd of extras said "awww" 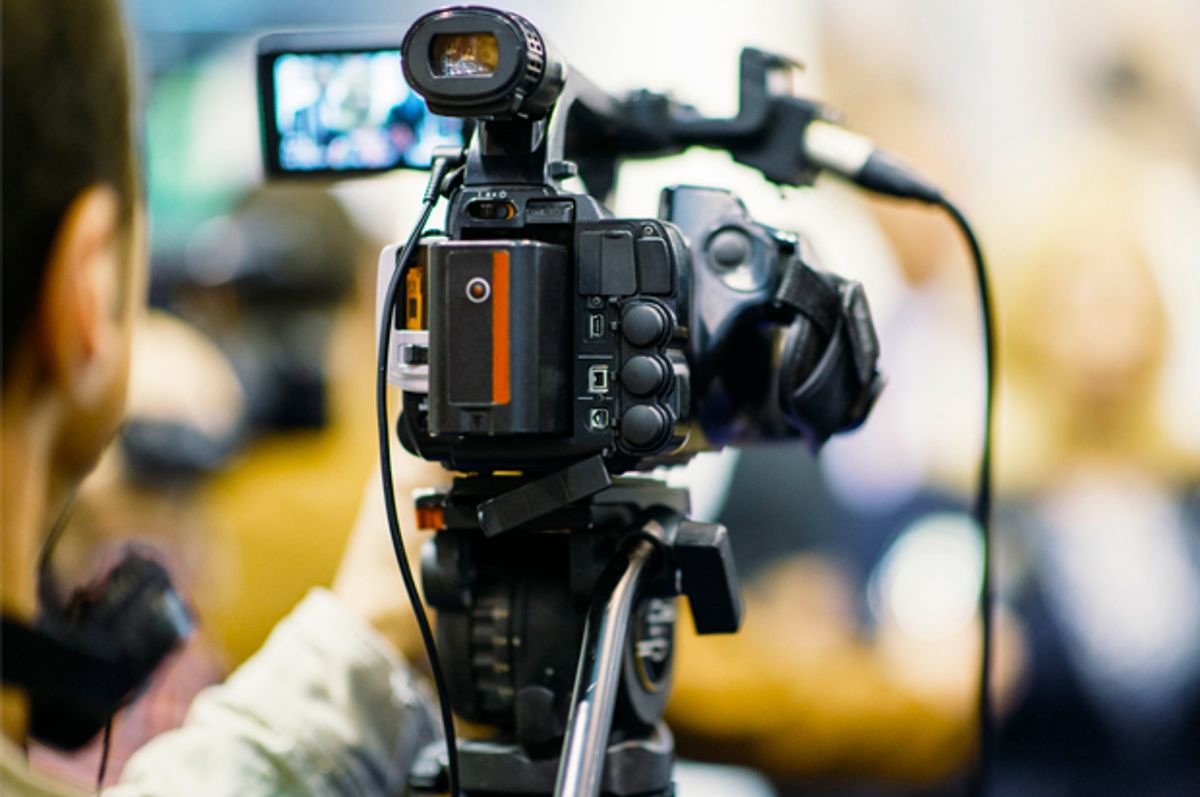 When Ryan finally told me he loved me, we were standing in front of 15 crew members, three producers and 20 extras.

“Jesse,” the head producer whispered. “What do you say?” Frozen, I stared into Ryan’s eyes, a pair of ice-blues I had said goodbye to four months earlier when he couldn’t return the three words he articulated now in front of the cameras.

“I love you,” Ryan repeated.

I shifted closer, trying to maintain some privacy around such an intimate confession. “You already know I love you,” I muttered, embarrassed.

The producer instructed Ryan to hand me the potted jade plant he was holding. I’d had a jade in my bedroom that died right as our two-year relationship ended. Ryan must have told them.

I took the plant and Ryan gave me a kiss. The extras emitted a collective "aww." The producer yelled "cut" and commanded another take.

When I went to meet Ryan that day, I didn’t know I'd be walking onto the set of an MTV reality show. This particular series followed an ordinary person surprising someone in his or her life with a profound admission, like a coming out, freshly signed divorce papers, or in my case, a declaration of love. I thought I was meeting Ryan to swap sweaters we’d left at each other’s apartments. Instead, I was signing a release form on the 14th floor of a Tribeca skyscraper.

I launched into questions: “How long were you planning this? Was it your idea?” And the most pressing: “Is this real?”

Ryan started to speak, but the producer interrupted. “When the team heard Ryan’s story, we couldn’t turn it down.” It seemed unrequited love revisited and reversed between two gay men was the most romantic of tales.

“Ryan told us about the jade plant,” the producer continued, “and he picked this one himself. He really loves you.” The producer handed me the pen. “Sign and then you guys can go home — together.”

When Ryan and I met two years earlier at a gay bar in the East Village, our one-night stand evolved into a fiery and constant affair. We spoke entirely different emotional languages, and it was exciting. Ryan showed his affection through actions; I showed mine through words. He’d knock at my door Sunday mornings with tickets to back-to-back Broadway shows after rushing the box offices at 6 a.m. He’d pick me up from JFK in a Zip Car with a bag of groceries to make dinner. He’d cook eggs and bacon the next morning. His gestures made me feel special and important in a way that I had never experienced.

I was quick to affirm his thoughtfulness with reassuring texts, handwritten notes and quiet thank-yous right before we drifted off to sleep. When I realized I was in love, six months into our relationship, I felt an urgent need to tell him. This was when we faced our biggest impasse. I’d grow quiet at night, the words daring to be spoken, but he never asked me what I was thinking or noticed the weighted silence. Instead, he’d wrap his lanky limbs around mine, put his face between my neck and shoulder and breathe into me, quelling my anxiety and silencing my need to speak. Ryan became my greatest comfort and deepest insecurity.

When we returned to my apartment after filming the scene, Ryan placed the jade plant on an empty space on the shelf by my window. “There,” he said. “That’s where Jade-a Pinkett should stay.” Thoughts about the night rushed from my head to my throat, where they remained trapped. Before I mustered the energy to say anything, Ryan was pulling off my clothes with an eagerness as palpable as the first night we met. We fell into the familiarity of each other’s bodies, and soon afterwards, into the routine of our relationship.

Over the following week, I told my friends what had happened and they absorbed the story with skepticism, quickly painting Ryan as manipulative and driven by ulterior motives. “He’s an actor. He’ll do anything to get on TV,” they warned. I defended him. “It was an act of romantic valor!” I wanted to believe, but an uncertain part of me needed to know if my friends were right.

“Did you do it to get on TV? Why couldn’t you say I love you earlier, just with me?” I had asked Ryan this countless times since speaking with my friends, but the questions still gnawed at me. This time, Ryan rubbed his eyes, disheartened we were revisiting the same conversation.

“I’m sorry it made you uncomfortable, but I meant this as a good thing,” he said. “Please, trust me.”

The tone in his voice was painful and convincing. He hadn’t thought about how I might process the situation. But even though he recognized my uneasiness about the show, he also never recognized how I might have liked him to say he loved me: not in front of cameras, but when he had been moved to do so in a private moment, when his intentions were indisputable.

Ryan took me into his arms. “We’re okay now,” he said.“I love you.” But those words felt far from intimate. They were haunted. “I love you too,” I said back, and forced a smile.

We spent time together, determined not to talk about the show. We saw readings of new plays, lounged in Washington Square Park, barbecued outside as spring broke into summer. But whenever we were settling into our old selves, MTV would make an unwelcome appearance.

One month after the shoot, a cameraman visited Ryan’s roof to film us enjoying the downtown view, resting our heads on each other’s shoulders. A week later, the same cameraman wandered behind us on the street, capturing us holding hands, opening doors for one another, kissing goodbye before finding our different subways. After each afternoon of filming, Ryan and I grew more silent around each other.

Then we hit our breaking point.

The production team separated us into two rooms and gave us each a script to read. It was three months since the first shoot and the producers needed to record a phone call between us to insert at the beginning of the episode. Ryan would explain where I needed to meet him and I’d feign confusion. My name was spelled wrong on the piece of paper.

“Hey, where are you?” I read, monotone and detached. Ryan replied, “Walk through the doors and take the elevator to the 14th floor,” his voice poisoned with guilt.

As we repeated the dialogue, my chest pulsed with an untamable anger. Why had I been too afraid to rip apart my contract the first day? After the tenth time saying the same fabricated sentences, I threw the script down on the table. “That’s it,” I told the producers. “I can’t do this anymore.”

We sat on a downtown-bound N train, neither of us speaking. I turned to Ryan. “I regret signing the release form and I wish none of this had ever happened.” As the words escaped my mouth, I knew they were the right ones. The past three months of forceful believing couldn’t override the gut feeling I knew to be the truth. I assumed Ryan would agree, shake his head yes and let out a sigh. Instead, his whole body sunk into itself. While I sat tall, his elbows fell to his knees. Ryan brought his palm to his cheek, turned his head and stared at me so intensely that I gripped the bottom of the subway seat. The train rocked back and forth against the tracks, and in this rhythmic near-silence, I realized Ryan showed his love for me the only way he could, and that it would never be enough.

We ended our relationship amicably a few weeks later. The episode aired, but we made a promise to never watch it.

The other day I was packing up my room in preparation for my fourth New York City move. I didn’t realize how much junk I kept in my drawers: empty sunscreen tubes, faded movie tickets, Ikea instruction manuals. Cleansing as it felt to throw things away, I couldn’t bring myself to let go of the jade plant, even though I had contemplated shattering its ceramic pot on numerous occasions. Now it sits on a window ledge in my new bedroom. As other relationships begin and end, it stays faithfully in its place, petals pressed against the pane, perhaps reaching out to my first love who gave it to me. The jade’s not a symbol of my repressed desire to be back with Ryan. It’s a memorial to what happened between us, the only real artifact from our reality television disaster. I'll need to repot it soon. Its roots and leaves are demanding more space — they’re growing so fast.

Since the show aired, people have approached me and raved about our love story — so dreamy and enviable. I smile and nod, and I suspect Ryan does the same. We both know that what they see is far from real. But strip away the producers, scripts and stealth cameras, and one truth remains: We were two people trying to love each other when it simply wasn’t right. I may never look back on what happened with any retrospective fondness, but this truth moves forward with me, pure and protective, reminding me when to sign on and when to walk away.

Jesse Steinbach is a Brooklyn-based writer and the digital managing editor of Out magazine. He doesn't hold a grudge and still binges The Real World. Follow him on Twitter and Instagram.