Gen. Wesley Clark's son and namesake on why protecting the environment is a human issue, not an Indian issue 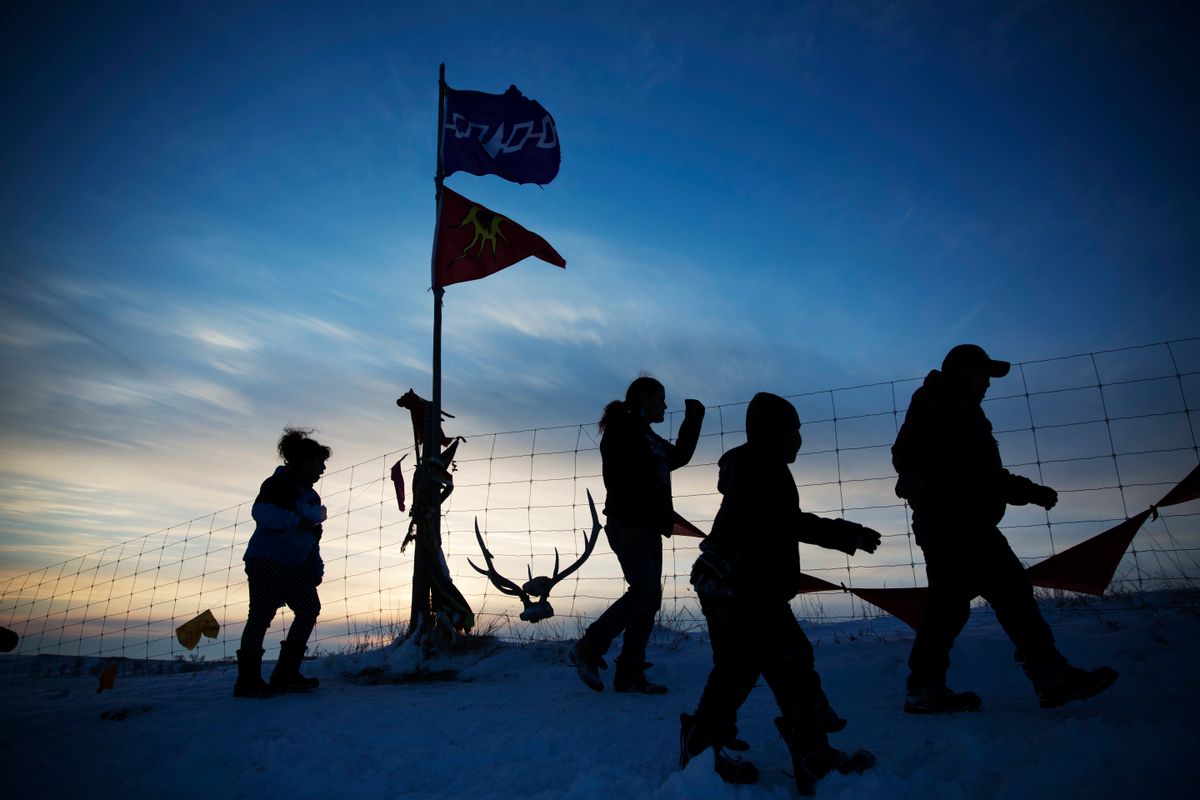 "I'm just a dude who wants to stand up for what is right," said Wesley Clark Jr. when we spoke by phone about his trip to the Standing Rock Indian Reservation in North Dakota. There's a driving rainstorm at my end, so it's hard to hear him. We keep getting cut off: I assume the weather is affecting our cell connection, but Clark tells me all his phones are tapped.

He may be right. Clark has spoken out publicly against special interest groups and political administrations, and he is not really "just a dude": His father and namesake is retired U.S. Army general Wesley Clark Sr., formerly the supreme commander of NATO's military forces.

The younger Clark was packing up his car in Los Angeles for the drive to Cannon Ball, North Dakota, where more than 2,000 U.S. military veterans like him have converged with plans to form a human shield around hundreds of Dakota Access pipeline "water protectors" on Monday. "I don't want you to say that I am anyone special: there are millions of us out there who feel the same way," he insisted.

A Georgetown-educated screenwriter, activist and guest host for the "Young Turks" online news broadcast, progressive television show, Clark Jr. served four years in the Army and has become an active voice against the type of military action he observed when his friends enlisted after 9/11. Clark was raised around the military and loved his upbringing, but he says he and his famous and dad are diametrically opposed when it comes to his involvement with the cause of the Standing Rock Sioux.

We spoke about his military past, the present conflict, environmental trauma and Clark's feeling for the people of Standing Rock. Since our conversation, the U.S. Army Corps of Engineers has denied Energy Transfer Partners, the company responsible for the Dakota Access pipeline, the easement it needed to lay pipe under a portion of the Missouri River that Native Americans have designated as a sacred site. Although there may be reason for optimism at Standing Rock, the fight for clean water, environmental justice and indigenous rights goes on.

When did you enlist in the military, and why?

I enlisted a  week after I graduated from Georgetown University. It was a combination of reasons: Partly because of my dad — he was  a colonel at the time I went to school — and partly because I did ROTC to pay for college. I always thought I was going to serve in the military. It’s a big family when you are a part of it, and is not like the civilian world. First, I was a lieutenant, and then I became a second lieutenant. I had a great experience. The officers weren’t always fantastic, but I loved being a soldier. I loved the men I worked with.

What was your military experience like? Did things you saw or experienced lead you toward future resistance to violent military force?

When you’re a junior officer, you see the world in black and white. It is not until you are an officer that things become gray. I was enraged, constantly seeing everything in black and white because there was important work to do, project[s] we could work on, and we never did any of that in the three years I was in. When I asked about other priorities, I was told there wasn’t time or money.

I was living in New York when 9/11 happened, working for a digital arm of Cantor Fitzgerald called eSpeed. I watched it all happen from 6th Avenue and 14th Street, and everyone I worked with died. I took that big long walk home north with everyone else that day. That night, a friend called and said, "We should have a peace march." I was livid; 9/11 did exactly what al-Qaida wanted: It filled us with hate. I had just gotten out of the service, and they could have called me back.

So I said, "F**k it, I’m going back!" My dad said, "Don’t do it. They won’t use you to get the people who did this. If you go, you will see your friends die, and you may lose a limb yourself; maybe you will end up killing somebody. When you come home, you will realize you got used, and you will be angry and bitter. It will change your whole life.” I listened, and I watched my friends go back in and get hurt and worse. My dad was right. He and I don't agree about my going to Standing Rock, but I'm going.

Why did you decide to travel out to Standing Rock? What about the resistance there is important?

We put up an event on Facebook with Michael Wood Jr., and we put out an order for veterans to join us at Standing Rock. We had 50 or 60 people initially, and $3,000 donated three weeks ago. As of this week, there were 2,500 veterans scheduled to come, with 600 more on a wait list — and much more money raised.

I have been on the left and the right in this country; neither party is acting in the interest of the people of the United States. [Elected officials] are a bunch of lawyers, not leaders. If you put together all the information we know about politics, the economy, war and peace and climate change, we don’t have much time left to fix environmental problems.

We have about eight years. When the Oglala Aquifer runs out of water, it's gone. It’s a non-replenishable aquifer. There’s a long-term drought in the American Southwest: I can match up an overlay of anywhere there’s water shortages, and there’s violence. If you bought a house in Florida or own any property at sea level, 25 feet or lower, by the time you're done paying off the mortgage, no one will insure the property. Right now, we have more money than we have ever had, and once the water is gone, we will have no capital to build infrastructure to save us from what’s going on.

What can the public expect to see from the veterans at Standing Rock?

We will have a ceremony with the Sioux tribe on the morning of Dec. 5. Some members of Congress will be there, like Rep. Tulsi Gabbard. Then we'll have a press conference, and the rest of us will mobilize to execute the multiple contingency plans we have come up with. It will be at least three days of planned action, Dec. 5 to 7. Then we are hoping for replacements. There is a waiting list of veterans who want to join the peacekeeping activities.

What can other veterans who stand for peace do to help? Do you have enough bodies at Standing Rock to support your efforts?

We don’t want any active duty [personnel] participating and risking damaging their service record. Only people who are OK with getting arrested. Veterans Stand for Standing Rock, Veterans for Peace and Iraq Veterans Against the War are all working together with the tribal factions. We are out there to help, to do good and to put our bodies on the line to try and help save this country.

What do your boys think about you going into a potentially dangerous situation far away?

My sons are worried about my safety. Look, it’s three weeks out from Christmas, and we have 2,500 veterans going to Standing Rock. No one is being paid a dime to stand out there and get beaten up. We will follow the example of Gandhi or Martin Luther King and turn the other cheek.

You have said that constitutional issues are in play at Standing Rock. What do you mean by that?

People join the military, police and fire departments because they want to help people. We all take an oath when we join up to protect the Constitution of the United States from enemies foreign and domestic. This government has run roughshod over constitutional law, especially in the last 16 years.

Since 9/11 we have acted like a bunch of scared toddlers and, in fact, more people have been killed by toddlers with guns than terrorists. We are doing what the actual terrorists want. We are breaking our own values, disobeying the Constitution, spying on people's emails and phone calls, putting people on no-fly lists and restricting their travel.

We have officers who can confiscate cash from people that they pull over. At Standing Rock, the entire idea of "free speech zones" that they want to set up is a violation of free speech itself. The law officers want to create a little pen where we can say what we want; it’s bullshit. The actions at Standing Rock are also a violation of the Declaration of Independence, which says that "all men are created equal."

What’s happened out there, if you ask me, is that people protecting their water have been denied equal protection under the law. No one in Bismarck wanted the pipeline near them, so the Army Corps of Engineers said, "Let’s run it near the Indians."

What do you hope to achieve out there?

My only goal — and remember, I’m just a dude — is that I want people to actually live in peace. I want to create a future for my children. I don’t want to run for office, make a bunch of money, be a TV personality.

I just want a job that pays the bills. There is one cause, and they are all interrelated: It’s saving the planet for our children. I was raised Catholic, but I can say that I’ve been at best agnostic for the majority of my adult life. I tried meditation, I tried to pursue religion. I just didn’t connect.

When Phil Young called me to say that elderly women who were praying were being beaten, children were being bitten by dogs, people were being put into dog kennels, it brought back memories from my childhood where I was sitting in church and hearing the gospel, with Jesus saying, "What you do to my brothers, you do to me." Suddenly it made sense. Now it’s like a spiritual fire has been lit inside me. So I’m going to do whatever is right for people defending their resources. I'm no Jesus: I've been a sinner. But I do believe in "do unto others."

The most important things in life are kindness, compassion, honesty, caring for neighbors. Most important is forgiveness. I am going out there literally ready to be killed, and if that’s what happens, I don’t want any violence to come out of it. I want forgiveness.

We are raised in America to be spectators. The vast majority of children don’t play sports in school; they watch games. Life is about living not watching other people do it. It’s not enough to go to church and say you believe; you have to live it. I’m nothing special. Everyone is going to Standing Rock with the same idea. We will not stop until this country gets it right, until we live by our proposed ideals.