To the dismay of the Koch brothers, Florida rejected Amendment 1, which moved to stifle rooftop solar power 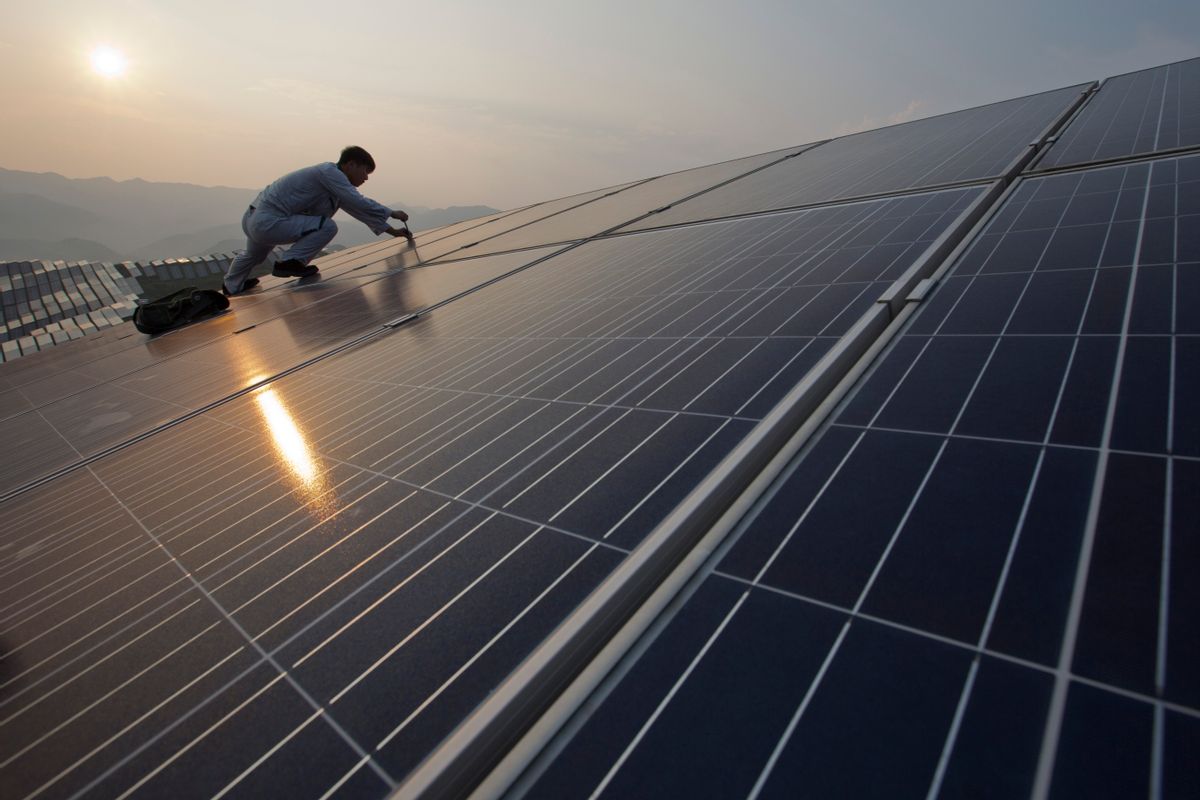 In this Aug. 21, 2016 photo, a worker performs maintenance work on solar panels at a photovoltaic power station in Songxi county in southeast China's Fujian province. Solar panels are among a series of industries from steel and cement to wind turbines in which Chinese production capacity soared during the past decade's economic boom until it vastly exceeded demand. (Chinatopix via AP) (AP)
--

This article first appeared in Grist.org

This points to a significant fault line in the GOP: It’s financially dominated by fossil fuel oligarchs (who will now have a major say in the Trump administration), but it’s also filled with people who think that renewable energy is about as conservative as you can get. And that suggests there are ripe opportunities for bipartisan cooperation on clean power — especially in states where it can provide a big boost to the economy.

Amendment 1, a deceptive ballot initiative drawn up by utilities, appeared to be friendly to rooftop solar efforts, but actually would have quashed them. It needed 60 percent of the vote to pass, and in September it was polling at 84 percent. But a politically diverse grassroots coalition of solar backers fought hard to get the truth out and beat back the measure, and ultimately they succeeded: Only 50.8 percent of Floridians voted in favor and 49.2 percent voted against, so Amendment 1 died. Several counties that went overwhelmingly for Trump — like Collier, Lee, and Sarasota — rejected Amendment 1 by a wide margin. That reflects a nationwide trend, as a recent survey by a Republican polling firm found that 75 percent of Trump voters support “action to accelerate the deployment and use of clean energy.”

Florida has been known as the “sleeping giant” in the solar industry. It’s filled with big, juicy suburban roofs perched atop homes with big, juicy air-conditioning bills. Only California and Texas have more housing units. But because of state policies that have discouraged rooftop solar, Florida lags far behind other states in the number of solar installations.

Activists across the political spectrum have been pushing to change those policies and open the state up to solar power in recent years, and utilities and Koch-backed corporate groups have been pushing back. Amendment 1, as Grist reportedbefore the election, was a big part of that pushback effort. That it lost is very good news for renewable energy in Florida. In fact, less than a month after Amendment 1 went down, SolarCity, the largest solar panel installer in the U.S., announced that it was moving into Florida’s residential market.

Here’s what clean power advocates across the U.S. can learn from Florida’s solar fight:

Lesson 1: Conservatives can be big clean energy boosters — if you sell it right

Many conservatives are downright enthusiastic about renewable energy, says David Pomerantz, executive director of the Energy and Policy Institute, a watchdog organization that investigates attacks on clean energy policies. Tea Party activists were some of the most influential members of Floridians for Solar Choice, the coalition that fought to defeat Amendment 1.

“With the Koch brothers, it’s certainly their goal to keep conservatives in lockstep to ban renewables,” Pomerantz says. “I don’t think it’s working, especially in Florida.”

Tory Perfetti, the Florida director of Conservatives for Energy Freedom and chair of Floridians for Solar Choice, says conversation and compromise are essential when working across party lines to promote clean energy. “You need to talk with people with a very calm mind,” Perfetti says. “Not an open mind. A calm one. You listen to everybody’s individual issues, and you don’t violate people’s individual and specific concerns. It says something that in over two years we have not lost one member of FSC. ”

The coalition had to do some deft linguistic maneuvering to come up with a single handout on Amendment 1 that could be given out to any Floridian, regardless of political affiliation.

“We had to work in a smart way, and not set up subtle trip wires that were turning people off,” says Stephen Smith, director of the Southern Alliance for Clean Energy. “Some conservatives don’t like the word ‘sustainable’ because they associated it with the United Nations. They wanted to use the word ‘rigged’ at the same time that Trump was running around saying that the election was rigged. But the League of Women Voters didn’t want to use that word and give it any more power.”

The coalition’s Facebook page was also a powder keg that needed to be constantly defused. “When Jimmy Buffett endorsed No on Amendment 1, people started writing ‘I hate Jimmy Buffett’ all over our Facebook page, because Buffett was a Hillary supporter,” Smith says. “We had to delete so much.”

Coalition members decided there was a time and place to talk about climate change in relation to Amendment 1. And that was when they were handing out fliers at a Clinton rally, Smith says — not when the coalition was writing the flier itself.

“I think that climate change is becoming acceptable in South Florida,” Smith says. “They’re increasingly aware of the vulnerability of the Everglades and Miami. I just don’t believe the whole state of Florida has come to that realization yet.”

Indeed, although 66 percent of Florida voters polled on Election Day said climate change is a serious problem, 87 percent of the Floridians who voted for Trump disagreed.

Focusing on other benefits of clean energy — like the jobs that a booming rooftop solar industry would bring to the state, and the chance that solar could lower utility bills — attracted much more support.

Lesson 3: It’s good to have a common enemy

Utility companies turned out to be a perfect villain in the Amendment 1 fight. They were already unpopular in Florida for raising rates, so citizens were receptive to the argument that utilities were misleading voters and trying to protect their monopoly markets.

Focusing on a villain has often proven to be a valuable organizing tool. The anti-smoking wars of the ‘90s relied heavily on a “cigarette companies are lying to you” narrative. That kind of messaging has made its way into the climate movement via the Exxon Knew campaign.

It also helps when you catch your villain, Nixon-like, talking about misdeeds on tape. In October, Pomerantz obtained a recording of Sal Nuzzo, a vice president at the Koch-funded James Madison Institute, bragging to a group of think tanksabout the “savvy maneuver” used by Amendment 1’s backers to confuse voters. Nuzzo recommended that other groups use “a little bit of political jiu-jitsu and the language of promoting solar” to accomplish their own political goals.

“The leaked audiotape just reinforced what we were saying,” Smith says. “But we had been pouring gas all over the state, and that was the spark.”

Lesson 4: Be nimble enough to change course when needed

The coalition went into this year thinking that it was going to be promoting pro-solar measures. It got a minor one approved on the August primary ballot. Meanwhile, it was putting most of its energy behind a more aggressive ballot measure that would limit the barriers utilities could throw up in the way of people who want to put solar panels on their roofs. The coalition started trying to gather the 683,000 signatures needed to get that proposal on the ballot.

But then the utilities responded by crafting their own ballot initiative, Amendment 1, which, despite its deceptively pro-solar language, would amend the state constitution to make it harder for people to put solar on their roofs. Utilities and their allies threw a vast amount of money at paid signature gatherers and successfully confused many state residents about which ballot measure was actually pro-solar.

It wasn’t the path the coalition had envisioned, but by successfully fighting off the utilities and demonstrating that Floridians want more solar power, the activists have laid the groundwork for more proactive campaigns in the future.

Utilities spent $20 million trying to pass Amendment 1. In contrast, the coalition, after it began fighting Amendment 1 in earnest in September, was working with monetary donations of roughly $92,500 and in-kind donations of $220,300, says Jennifer Rennicks of the Southern Alliance for Clean Energy.

“Many people rely on overpowering opponents with massive amounts of cash,” Perfetti says. “And this was the second most expensive ballot campaign in the history of Florida.”

“But we did the politics as local, the way that old-school campaigns did years ago. Every media outlet. Every meeting. Every Rotary and Chamber of Commerce. We ran a grassroots campaign the way that it should be run.”