A panel of CEOs who gathered to advise the president includes the head of GM, which makes Buick Envisions in China 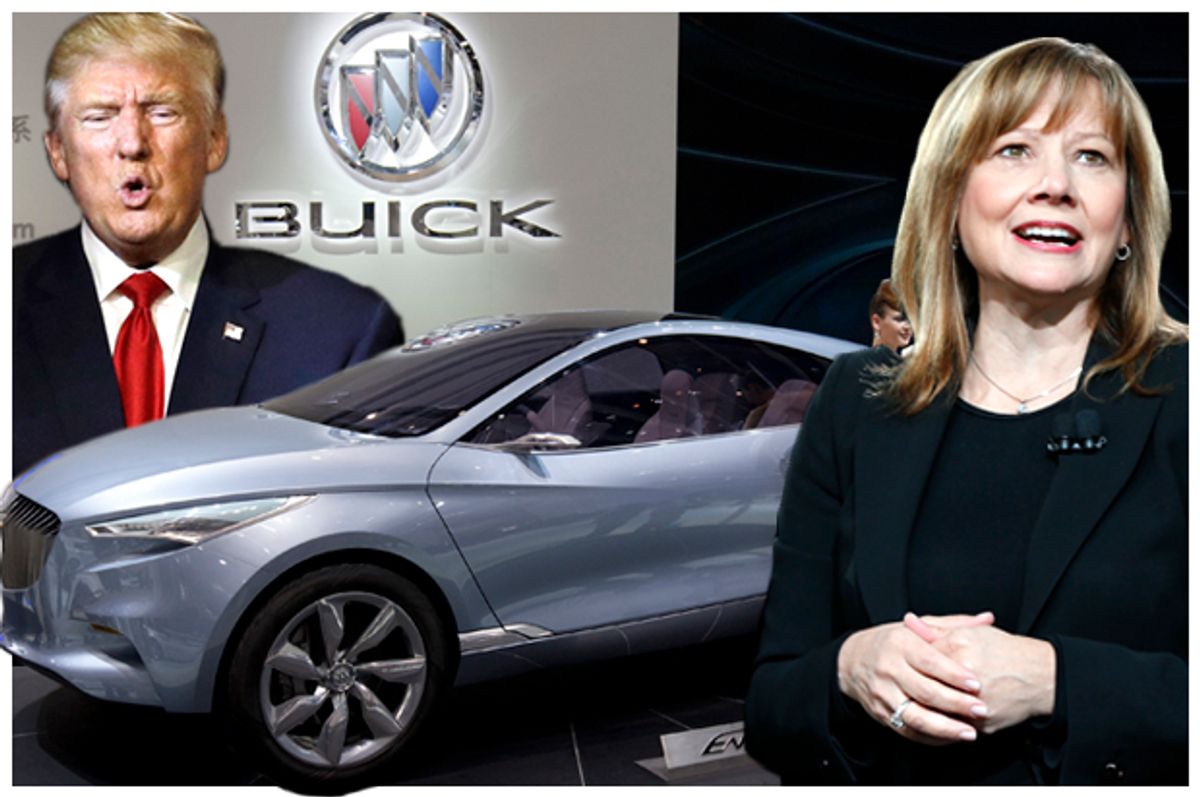 “We look forward to working with President-elect Trump, his team and other corporate and civic leaders on policies that support a strong and competitive economy and automotive industry,” Barra said in a statement released on Friday after Trump announced the panel's creation on the website of private equity firm Blackstone, whose founder, Stephen Schwarzman, will head the group.

But including General Motors on the advisory panel raises yet more questions about the president-elect’s pledge to punish U.S. companies for using foreign factories to make products and import them to the U.S.

While Trump spent a good deal of time on the campaign trail pillorying Ford Motor for its plans to send small-car production to Mexico, he’s avoided firing similar salvos at GM for doing the same thing. Not only does GM have factories in Mexico churning out cars and trucks for U.S. market but this summer it also became the first American automaker to sell a Chinese-made car in the U.S. market.

The 2016 Buick Envision is produced under a joint venture with China’s largest car company, SAIC Motor, and since the start of the year Envision sales have accounted for about 5 percent of all Buick branded vehicles that GM has sold in the U.S., or about 10,300 units, according to GM’s November sales report. The company is also planning early next year to import Chinese-made plug-in hybrid versions of Cadillac CT6 luxury sedans.

A GM spokesperson told Salon by email it’s too early to comment on any specific policy issues or impacts “since we just don’t know yet,” but clearly U.S. automakers and parts suppliers have reason to worry.

Trump’s proposed punitive 35 percent tariff on U.S. companies that import products they make in factories abroad could have serious ramifications for America's auto industry, analysts say. Over the past two decades, the North American Free Trade Agreement has transformed the region’s automotive industry into a complex web of suppliers and plants stretching from southern Ontario to the outskirts of Mexico City. Unraveling that would be far more complicated to explain to the public than a series of tweets could handle.

Yet, on Sunday Trump took to his preferred form of public communication to reiterate his threat, offering little detail on his proposal to cut corporate taxes and curb regulations on companies while threatening businesses with steep import tariffs for firing U.S. workers and sending jobs to foreign factories.

How far Trump can go on his own to use executive power against U.S. companies is a big question that must be answered if he moves forward as he’s planned, according to Lee Branstetter, a nonresident senior fellow at the Peterson Institute for International Economics and professor of economics and public policy at Carnegie Mellon University.

“There are things the president can do under existing U.S. trade law to respond to various situations, but it’s hard for me to see how Trump’s proposal has any basis in law,” Branstetter told Salon. “And the notion that we’re going to be able to have a manufacturing revival [under Trump’s proposal] is completely divorced from reality.”

But what Trump is proposing what amounts to greater authority — targeting specific companies that send manufacturing work overseas. The president-elect claims his threat helped compel air conditioner manufacturer Carrier to keep about 1,100 jobs in Indiana, but more likely it was the $7 million that Indiana granted Carrier in promised tax breaks.

This, however, may very well be Trump’s endgame: He could compel states to join him in cutting taxes and regulations on companies so that his tariff threat never has to be challenged.

“Trump has recently said to companies ‘don’t go abroad, pit the states against each other and secure a better deal for yourselves’ — and that’s extremely problematic,” Branstetter said. “Already we have states that don’t have the revenue to provide a decent education for all of their citizens because they’re giving out collectively tens of billions of dollars a year in subsidies to keep manufacturers that have threatened to move.”

Branstetter said we should wait to see if Trump’s economic advisory panel is anything more than window dressing for a president-elect who is rapidly building a reputation of ignoring the advice of policy experts. If Trump listens to the corporate bosses he’s convening, he’s very likely to hear a lot about the potential pitfalls of implementing an aggressive protectionist policy that could lead to trade wars, retaliatory tariffs on U.S. exports and even considerable job losses.