No justice for Walter Scott: Michael Slager's mistrial is a disgrace, but not a surprise 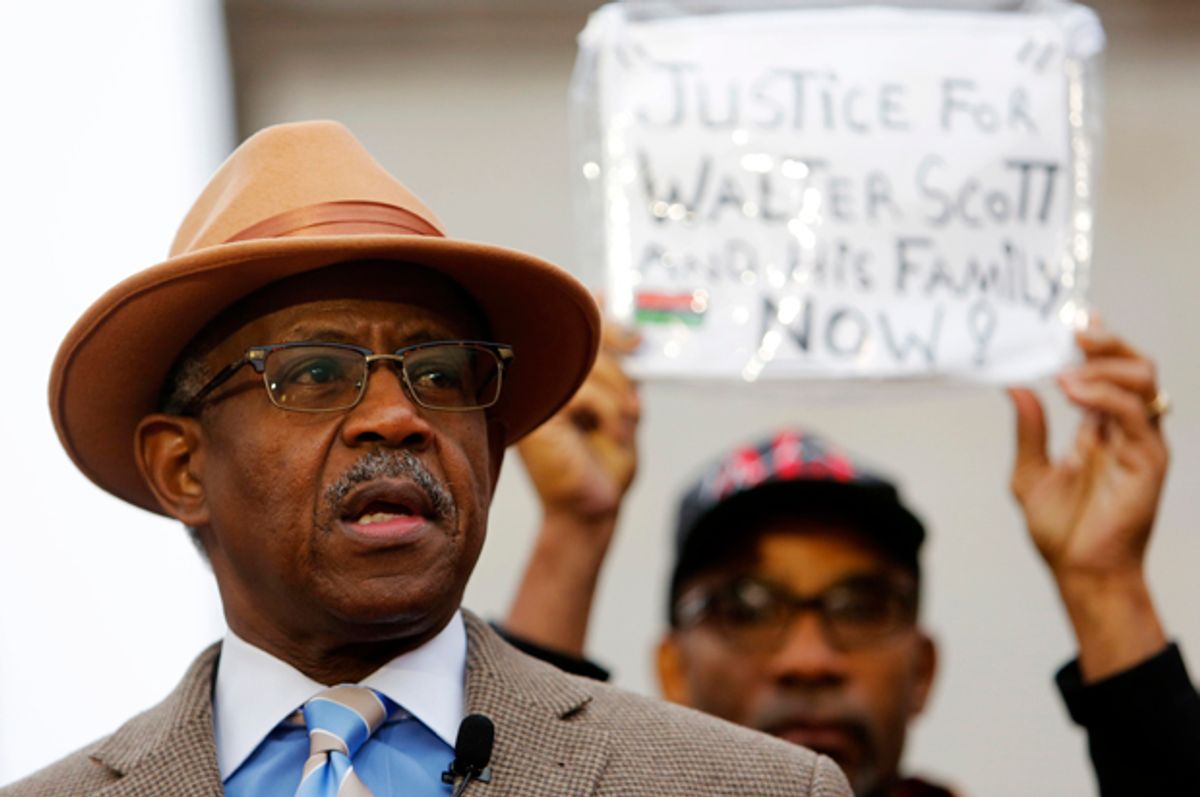 The Rev. Nelson B. Rivers III speaks during a prayer vigil in front of the Charleston County Courthouse as the jury deliberates in the Michael Slager trial Monday, Dec. 5, 2016, in Charleston, S.C. (AP/Mic Smith)
--

First and foremost, I’d like to send love, light and peace to the family of Walter Scott. I’m well aware of the insurmountable pain that comes with losing a loved one to a senseless act of violence. My prayers remain with you and yours.

Yesterday in Charleston, South Carolina, Michael Slager, the disgraced police officer charged with the murder of Walter Scott walked away with a mistrial ruling. After 22 hours of deliberation, a fair and balanced jury of 11 white people and one black person couldn’t reach a verdict. The note the jurors sent to the judge read, "Despite the best efforts of our members we are unable to come to a unanimous decision."

Slager shot and killed Scott, an unarmed African-American man, in April of last year. Slager, along with his partner Clarence W. Habersham Jr., lied to investigators about the event (Slager also faces federal charges for, among other things, obstruction of justice), claiming that Scott attacked Slager and tried to steal his Taser. He did not know that the shooting was captured on film by Feidin Santana, a barber who just happened to be walking to work. The film went viral on the internet, was used in court and shown to the jury frame by frame.

Santana's video, like the video of Eric Garner of Staten Island dying at police hands, clearly shows Scott running away from Slager, leaving any sane person with more than enough evidence to convict. But like Garner, Scott is black and these jurors aren’t sane: A black American can be lynched on film or even in front of the judge, and it still doesn’t matter. It’s almost impossible to convict a white officer for killing a black person.

The reactions from Slager’s supporters on the internet have been disturbing, to say the least, but everyone needs to pay attention to the letter that one juror sent to the judge, stating that he could not “with good conscience approve a guilty verdict.”

I don’t want to call that person dumb — or a blind, heartless, soulless racist — so I won't address that individual at all, other than to identify that statement as indicative of the mentality that makes it practically legal to kill African-Americans in this country, as if dark skin erases one's humanity.

Everyone involved in that decision should be ashamed of themselves. There's no way a person should be able to walk past a mirror after cosigning the murder of a fellow citizen. And where are all the "support the troops people" now? Walter Scott, like Michael Slager, served our country in the Coast Guard. But the same ugly racist double standard applies to Scott, the same way African-American soldiers were treated after World War II, receiving less freedom in American than POWs from Germany did.

South Carolina prosecutors say they will try Slager again, and he faces a federal trial early next year as well for deprivation of rights under the color of the law, use of a weapon during the commission of a violent crime and obstruction of justice. Will the outcomes of these trials be any different?

I keep going back to that "Daily Show" episode with Tomi Lahren. Her flawed logic, her inability to answer real questions or think past social-media clicks and, worse, her refusal to see humanity within the black community don't keep her from being a new "media star," presenting a clear view of the path our country is on. She foolishly compares the Black Lives Matter movement to the Ku Klux Klan and people listen. They don’t think or research; they just listen, well up with anger and further enforce the racial divide that already exists in our country. The end result creates people like that juror who could not “with good conscience approve a guilty verdict.”

People like Lahren and her brain-dead followers will never get it. Black Lives Matter is about justice for our fallen victims and ending police violence. The KKK is a hate group. Black Lives Matter has nothing to do with harming innocent people or harming anyone; violence is not in its rhetoric and its members are always the first to speak out against it.

People like Lahren see the word "black" in the group's name and instantly associate it with pro-blackness, which is not racist like pro-whiteness. Pro-blackness is rooted in awareness and self-empowerment; pro whiteness involves destruction of nonwhites and violence. Get it? But let's say Lahren is right. Let's say the Black Lives Matter responses to these murders were akin to terroristic. Wouldn’t we have a right to be destructive? The system fails us over and over and over again.

When was the last time a black person murdered a cop in cold blood and walked like Slager, Randall Kerrick or the rest of these cops that keep getting off? When was the last time a black person killed a white person during a road rage incident (like what happened to former NFL player Joe McKnight on Saturday) and went home without a charge until the case received viral media attention? The McKnight case echoes how George Zimmerman, Trayvon Martin's killer, was treated initially — no charges until the world reacted, and Zimmerman still won his case in the end.

There are enough nationally recognized cases and available data accessible through one Google search that easily proves that this country is racist. How racist is America, exactly? I don’t know; how high is the sky? And can there be an end to it? I don’t know; how deep is the ocean?