Paul Ryan's repeal promise: Nobody will be "worse off" during Obamacare transition 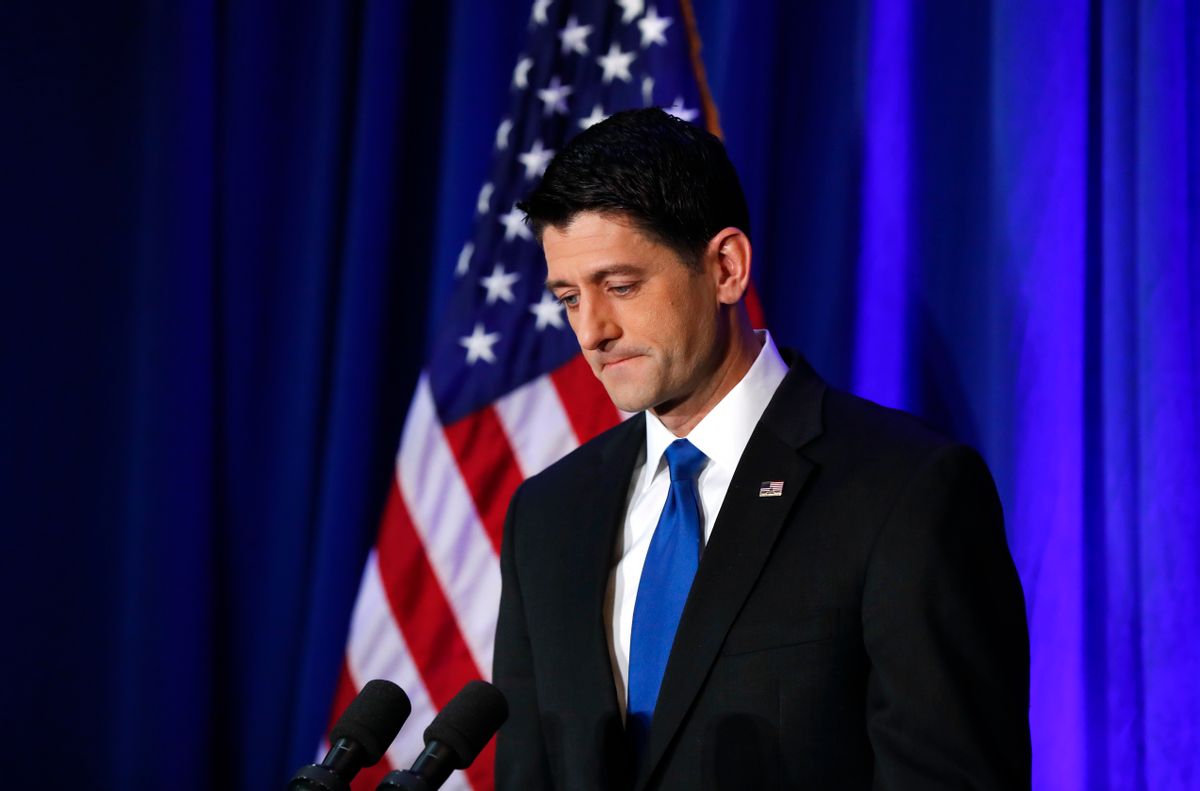 House Speaker Paul Ryan of Wis. listens to a question during a news conference in Janesville, Wis., Wednesday, Nov. 9, 2016. (AP)
--

After some initial uncertainty as to how they would try and dismantle the Affordable Care Act, Republican leaders in Congress seem to be settling on a strategy: Vote to repeal the health reform law as soon as possible but delay implementing the repeal for several years while they figure out what should replace it.

This sort of political logic is fantastically risky and has failed in the recent past, but Republicans are impelled to go down this path because they made political promises that they have to keep, even if it means putting health coverage for millions of Americans at risk.

But House Speaker Paul Ryan is confident that not only will this incredibly risky repeal plan work, it will go off without so much as a single person seeing any disruption in his or her health insurance coverage status during the transition period between Obamacare’s repeal and its replacement.

“Clearly there will be a transition and a bridge so that no one is left out in the cold, so that no one is worse off,” Ryan told the Milwaukee Journal-Sentinel. “The purpose here is to bring relief to people who are suffering from Obamacare so that they can get something better.”

There is little reason to believe this is true.

Obamacare “repeal” can come in many different forms, but the most likely (and quickest) way for Republicans to go about it will be through budget reconciliation, which will enable them to obviate a Democratic filibuster in the Senate. Reconciliation will allow them to repeal the parts of Obamacare they hate the most: the mandates, the premium subsidies, the Medicaid expansion and the taxes on rich people that fund the legislation.

But, as Ryan said, there will be a “transition” period during which some of those provisions — likely the subsidies and Medicaid payments to the states — will continue, probably until safely after the 2018 midterm elections.

This probably won’t make all that much of a difference for next year, given that health insurers have already signed agreements to participate in the state exchanges for 2017. For 2018, however, it poses a big problem, given that insurers will likely decide that there’s no point in renewing their commitment to the exchanges.

“Many insurers are already losing money on their marketplace offerings,” NPR reported earlier this fall. “If they know that the health insurance marketplaces are being eliminated and replaced by something else in 2019, why would they stick with a sinking ship?”

If those insurers bail, then consumers will lose their ability to buy federally subsidized health plans, which would leave them, to use Ryan’s words, “worse off” and “left out in the cold.”

There is a way around this. Republicans could move to subsidize the insurers and help cover whatever losses they might incur from participating in the exchanges during the “transition.” In fact, congressional Republicans are, according to The Hill already “in talks with insurers about policies they could implement to help improve their financial situation in that interim period and prevent a breakdown in the market.”

The Affordable Care Act already has mechanisms in place to incentivize insurers to participate in the exchanges and protect them against excessive losses. So Republicans are essentially trying to blow a hole in Obamacare and also temporarily patch that hole with more Obamacare.

But that’s easier said than done. Those provisions of the ACA that protect insurers from market losses were viciously (and falsely) attacked by Republicans in Congress as insurance company “bailouts.” Ryan himself as sounded the alarm about “massive insurance company bailouts in the near future with Obamacare.”

Republican senators introduced legislation just last month to block the administration from using taxpayer money to “shore up the finances of Obamacare insurers.” There is a high level of political animosity among Republicans toward using taxpayer dollars to assist insurers participating in Obamacare exchanges.

So what’s going to happen? Well, no one knows. And that’s largely because Republicans like Ryan keep refusing to actually grapple with the realities of repealing and replacing Obamacare. All they know is that they want to get rid of it and replace it with . . . something.

Eliminating a piece of legislation as far-reaching and consequential as the Affordable Care Act will obviously have negative consequences. But the speaker has nonetheless set a baseline to judge his party’s actions against: Zero people will be negatively impacted by Congress' voting to repeal Obamacare. We’ll see how well that promise holds up in the real world.