The art of "Archer": "The arc of the character of Archer is really interesting" 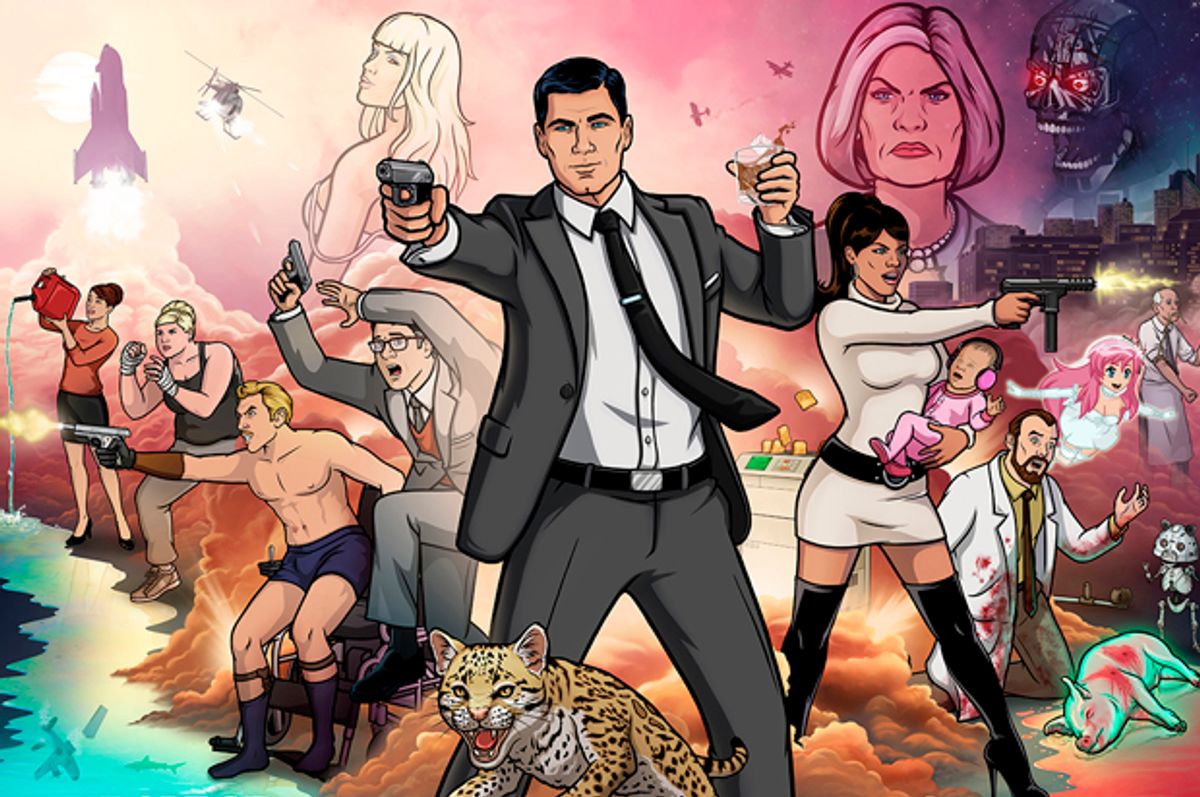 Cover detail of "The Art of Archer" (Dey Street Books)
--

One of the smartest, funniest shows on television is the animated espionage show, "Archer," which has run for seven seasons on the FX network. Much of the series, which returns in January, concerns Sterling Archer, a handsome, hard-drinking and often obnoxious special agent who initially works for a firm run by his overbearing, aristocratic mother.

A new book by the show's longtime art director Neal Holman looks at the way the show's distinctive visual style came together. It includes commentary by the show's creator Adam Reed and executive producer Matt Thompson and much of the cast. Christian Slater, who has voiced a CIA operative for some seasons, wrote the forward.

Salon spoke to Holman who was in the show's offices in downtown Atlanta; the interview has been lightly edited for clarity.

I could tell from the first episode of the first season that there were a lot of visual references in "Archer," even though I couldn't put my finger on them exactly. There's obviously a "Mad Men," 1962, dapper, sharp, retro look. But what else is going on here?

Really, in the pilot stages, we were looking at a lot of 1960s, 1970s comic book work. Like Jack Kirby, Steve Ditko, those artists — very clean artwork and very thick outlines. Especially at that time, a lot of the cartoons, especially those on television, especially in prime-time animation, had razor-thin line work, like "The Simpsons" and "Family Guy." Really tight line work. So we thought that a thicker outline would not only make the show stand out; it would call back to these 1960s comic books that we all loved and were reverential to.

And the background style developed over a few months. We took a kind of crappy 3-D render of the office and turned it into a lush 2-D painting. And the inked characters over the painting allowed the characters to pop forward; it was a unique look that we felt stood out from any show at that point. Once we put the two things together, we were off to the races.

Besides the comic book design, I pick up something more cheeky and satiric, though maybe it's my own strange psychology. Are there little, oblique references to "Speed Racer" and to the "Bob" Dobbs character in the [parody religion] Church of the Subgenius?

Yeah, those may be more on the subconscious level. But those are all reference points for us.

When I first started working for Matt and Adam, it was for "Sealab 2021" and then we went into "Frisky Dingo." We kept everything that worked well in "Sealab" and ditched the things we were fighting against. The transition to "Archer" was about the same.

Each season we sort of take stock on what is working and what is just a drain on production. We try to figure out how we can do better. The show now is much bigger and smoother than it's ever been. If you look at the pilot compared to a recent episode, it's almost like a different show.

Was there an especially abrupt break between one season to another?'

I think between season 2 and 3. I think our episode in Monte Carlo [in season 2, episode 11]  was our production cast working at full capacity. And then in the next episode we introduce 3-D vehicles into the show.

Your offices are in Atlanta, Adam is from Asheville. . . . Are you originally from the South?

The show takes place in New York, with glamorous trips to Europe and a season set largely in Latin America. The last season is set in L.A. Is there anything, though, about the show's sensibility that seems to you distinctly Southern?

I think there are Southern touches to the show, but Adam is a very well-traveled and well-read person. He can kind of write anywhere in the world, Hong Kong or whatever, and it feels accurate. The things I recognize as Southernisms are things like the love of Burt Reynolds . . .

He loves "Gator" and also "Smokey and the Bandit." And there are references to "Deliverance" and "Hooper," all of them.

I took this show originally as a kind of guilty pleasure for other retro straight guys who like single-malt scotch and '50s Playboy and "Man Men." But I've found gay men and left-leaning feminist women who love "Archer," too.

It makes me wonder: Is this a show that heroizes Sterling Archer as the coolest cat ever or is it somehow a critique of toxic masculinity? Is he a sleek, Bond-like hero or a cross between a frat boy, a hedge fund asshole and a lacrosse bro?

I think it's all of that. But I also think it's up to each individual viewer; I would never tell anybody what to think about it. What I personally love about it is that it shows all sides of Archer, this character. On one hand, he definitely fits the image of the lacrosse bro. And then he has a moment where he says, "Pam, I think you're my best friend." There's a real heart to this person.

He's not a flat character at all. He definitely has blind spots, you know? And he definitely pretends to have blind spots. There's a description of him as "willfully obtuse," which I think is quite apt.

And yet, the woman he is most attracted to is a very strong-willed, educated black woman. So he's not retro in that way —

Well, a show lives in everybody's mind a little differently, I guess. But we're talking about a rounded character who is also — literally — a cartoon. Oddly, after years of reading Daniel Clowes comics and watching "South Park," it's still startling to have an animated character with so many layers to him. I imagine "BoJack Horseman" is another instance of a deep character in an animated show.

I think the arc of the character of Archer is really interesting. I don't think there's another animated show that's done this — that's taken a character and over time he's grown and grown. Granted, it's by inches. The cancer episodes were really the first ones where you see him starting to have a heart. . . . I love that. I love the long game that Adam is playing.

There are some episodes where Archer is such a dick. And then in later seasons we meet Barry and this weasel-ly guy he went to boarding school with. Archer seems like a member of Belle & Sebastian by comparison, this really sensitive guy.

Part of me doesn't want to know. But what is Adam like? What's his style? What's he interested in?

Adam Reed? Oh, he's a jack-of-all-trades. Adam is an impressive guy in that there's not a subject that he doesn't know at least a little something about. "Oh, that was the summer I spent framing houses in France, working there illegally."

He's a guy with a lot of life stories.

I wish his scripts were available to the public so you could read what we read, week in and week out. They're really specific, when he's talking about environments and clothing and lighting. He's a very visual writer.

The editing on the thing is incredibly tight. There is never an extra second or an extra beat before a cut. It is really crisp.

There's not a hard date for the next season. Can you give us a hint of what's coming? Set in L.A. again?

It will be 1940s L.A. — 1947. It's another sea change, and so far we are about five episodes into the season. It's gorgeous, visually the prettiest season we've done. If anybody was feeling complacent, they're not anymore.