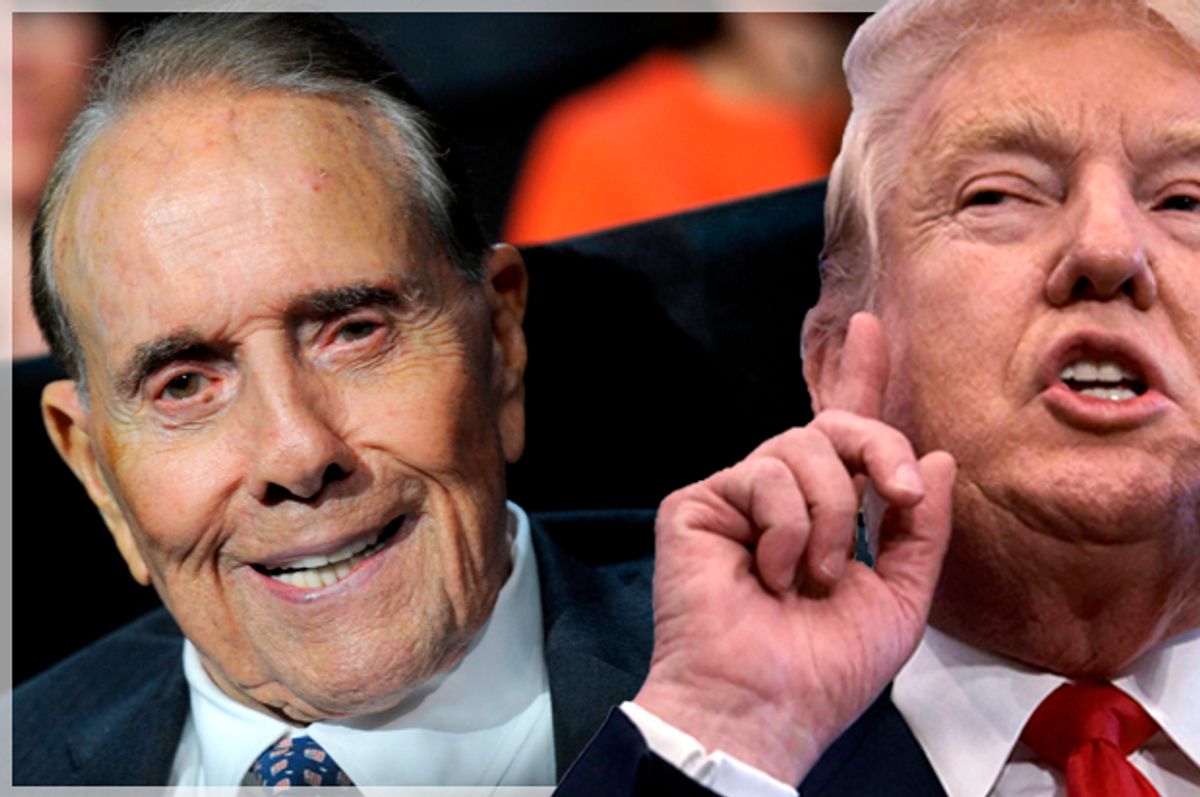 Dole, now a lobbyist with the Washington law firm Alston & Bird, was paid $20,000 a month between May and October of this year to advance Taiwan's interests in Washington, according to disclosure documents filed with the Justice Department last week. The New York Times further reported on the documents made public under the Foreign Agents Registration Act:

The documents suggest that Mr. Dole helped the government of Taiwan establish early access to Mr. Trump’s inner circle during the campaign, when Mr. Dole worked to involve Mr. Trump’s aides in a United States delegation to Taiwan and to facilitate a Taiwanese delegation to the Republican National Convention in Cleveland in July.

The effort has continued in the weeks since the election, with Mr. Dole on Tuesday saying he was trying to fulfill a request from a special envoy from Taiwan who was visiting Washington to see Reince Priebus, tapped by Mr. Trump to be White House chief of staff, and Newt Gingrich, who is close to the president-elect. (The Priebus meeting, Mr. Dole said, would most likely have to wait until Mr. Trump is inaugurated.)

Trump's phone call was widely criticized last week for breaking a nearly four-decade practice by the US of avoiding diplomatic acknowledgment of Taiwan. The last call a U.S. president made to a Taiwanese leader was in 1979.

Dole told the Wall Street Journal on Monday that his law firm “may have had some influence” on the phone call.

“It’s fair to say that we had some influence,” he told the Times on Tuesday. “When you represent a client and they make requests, you’re supposed to respond.”

"They see a new president, a Republican, and they’d like to develop a closer relationship,” Dole, the only former Republican presidential nominee to endorse Trump, said.

In total, the group has paid Dole's law firm approximately $200,000 since November of last year. According to public documents, Dole advocated on behalf of the Taiwanese government to U.S. officials including former Secretary of State Colin Powell, former Department of Homeland Security secretaries Tom Ridge and Michael Chertoff, and former Director of National Intelligence John Negroponte during that time.

The revelation of Dole's involvement fueled renewed criticism of the way in which foreign affairs are being handled by Trump.

“It does seem very strange that Trump is ignoring the state department while apparently allowing Bob Dole, a lobbyist for Taiwan, to make arrangements for him in what appears to be a change in US policy dealing with Taiwan,” Fred Wertheimer, the founder and president of watchdog group Democracy 21, told Politico. “Dole’s interests here certainly involved Taiwan’s interests more than it did American interests, and the fact that he was the intermediary raises a serious issue about just how President-elect Trump is going to make US foreign policy.”

Trump's controversial call has also stirred up stirred up troubles for Tsai, who was elected Taiwan’s first female leader in January.

On Tuesday, China called on the U.S. to deny Taiwan’s president entry to the United States as she embarks on a three-country tour of Central America with stops inNicaragua, Guatemala and El Salvador. Tsai is expected to fly through the U.S. next month en route to her tour.

In a statement to Reuters, China's foreign ministry said it hopes the U.S. "does not allow her transit, and does not send any wrong signals to ‘Taiwan independence’ forces."