The “Gilmore Girls” have the right to choose: How television is changing the conversation about abortion

Once upon a time a televison characters couldn't say she was pregnant, so "Gilmore Girls" have moved the bar 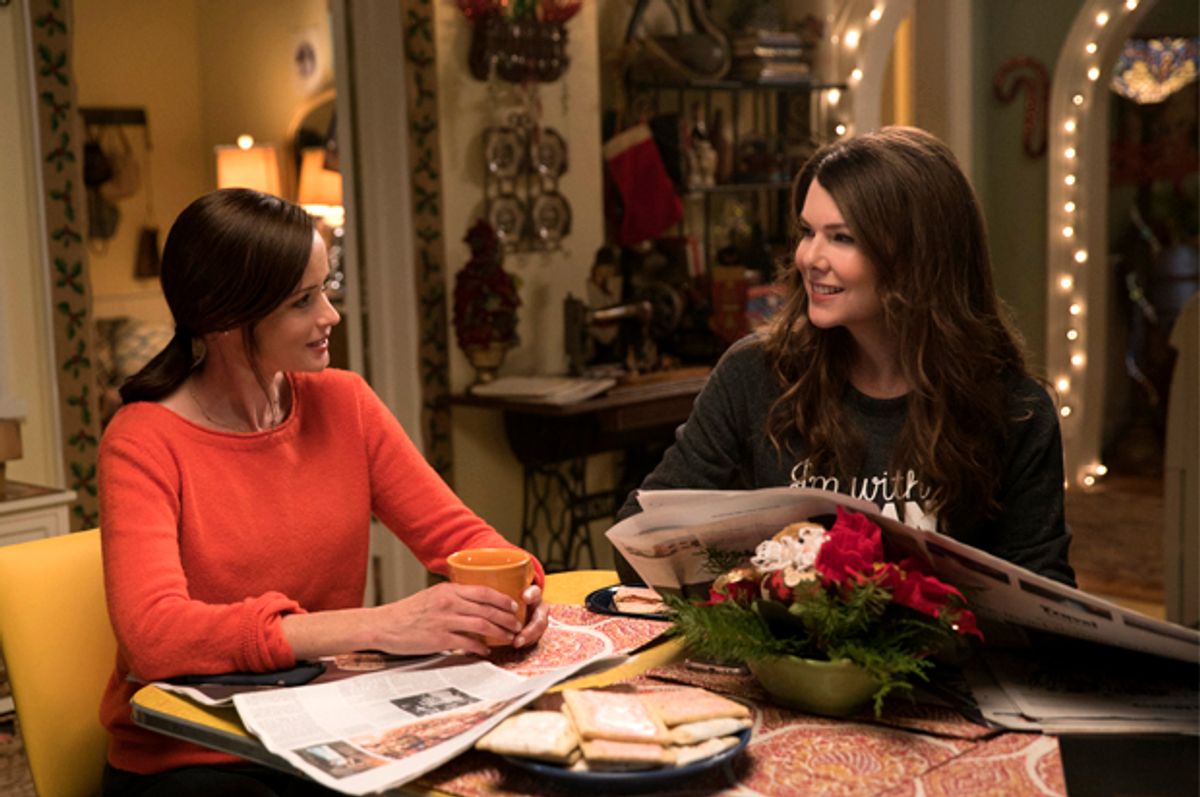 Rory Gilmore is pregnant — and she might not keep it.

So claims “Gilmore Girls” showrunner Amy Sherman-Palladino following the Netflix debut of “A Year in the Life,” the much-anticipated revival of the beloved mother-daughter dramedy. After leaving the CW series at the end of its sixth season, the creator claimed that one of her biggest regrets is not getting to end the show (which limped to a close with one ill-fated final season following her departure) her way. Sherman-Palladino claimed that she had planned out the show’s final four words as a way to bring the series full circle.

Spoiler alert: This article will discuss the final four words of “Gilmore Girls: A Year in the Life.”

Even if the exchange feels like a bit of a cop-out to arrive at those vaunted four words, there’s a beautiful bit of symmetry in the revelation. Rory is 32 in the reboot, the same age that Lorelai was when the series began in 2000.

But according to Sherman-Palladino, the parallelism doesn’t mean that the two women are destined to make the same choice about motherhood. When viewers meet Rory again, nine years after the original program went off the air, she’s stuck in a rut professionally, falling asleep on an assignment for GQ and sleeping with her subjects. Instead of the bright young bookworm destined for great things, the 2016 Rory is kind of a mess. Is she ready to have a child while she’s still getting her life together?

Sherman-Palladino has opted to leave the answer to that question open-ended.

“Rory doesn’t have to keep the baby,” Sherman-Palladino told TV Line. “There are choices here that she can make. It’s just the left turn. It’s that curveball that life throws you.” She added in an interview with BuzzFeed: “I think that somebody as smart as Rory is going to take a step back and look at all the angles, and then make her decision, because it’s too important a job to make the wrong decision when it comes to kids.”

The acknowledgement of Rory’s right to choose — without condemnation or judgment — is a huge step forward for a medium that’s struggled to represent women’s reproductive health in a way that’s responsible and considerate of both sides of the conversation. For too long, abortion has been depicted as a last-ditch option that women should be talked out of: When their families, friends and spouses voice concern, these women will realize their error of their ways and keep the child.

But a growing number of television shows are changing the conversation by letting women do what was at one time so taboo you couldn’t even say it on TV.

It is telling that television has long been so terrified of women’s bodies that when Lucille Ball became pregnant during the second season of “I Love Lucy,” the show had to dance around that fact. Although the sitcom did nothing to hide her growing belly, the episode in which she informs Ricky (Desi Arnaz Jr.) that they’re about to become parents is missing one key word: “pregnant.” Instead, Lucy tells her husband that she’s "expecting.”

That euphemistic treatment of reproduction might appear to be a relic of the 1950s — when the very idea of sex was so risqué that Ricky and Lucy slept in separate beds — but modern television has also struggled with being honest and open about women’s bodies.

The CW’s “Jane the Virgin,” which deals with the everyday realities of pregnancy in an extremely matter-of-fact way, stumbled last year when Petra (Yael Grobglas) was considering having an abortion. As I previously wrote for Salon, the subject of “the big A” was discussed in whisper tones, as if it were too shameful a matter to have a real discussion about. The show offered a mea culpa by allowing Xiomara (Andrea Navedo), Jane’s mother, to have an abortion this season.

Starting in the 1960s and 1970s, shows like “The Defenders” and “Maude” helped pave the way in representing women’s choices on television. “Maude,” the hit show produced by rainmaker Norman Lear (“All in the Family” and “Good Times”), allowed its title character to obtain an abortion in a groundbreaking two-episode arc in 1972, just months before the ruling in the Roe v. Wade case. The controversial storyline, which was viewed by 65 million people, led to thousands of complaint letters from outraged viewers. Many affiliates refused to air it, while sponsors pulled out of the show.

That backlash has reverberated even decades later. The producers of “Family Guy,” which has joked about everything from pedophilia to the kidnapping of Elizabeth Smart, decided that an eighth season episode about abortion, “Partial Terms of Endearment,” was too dicey to air on television. Believe it or not, critics actually praised the Seth Macfarlane-produced comedy for a surprisingly thoughtful take on the subject. After Fox yanked the episode, it was burned off as a DVD extra.

When an episode of “Degrassi High” showed Erica (Angela Deiseach) having an abortion, the U.S. airing of the long-running Canadian soap recut the footage, leaving it up to the imagination whether she went through with it.

To avoid backlash, many shows attempt to have it both ways — representing a woman’s right to choose without dealing with the implications of her following through with an actual abortion. That trope, referred to as “Good Girls Avoid Abortions,” has played out in numerous television programs of the 1980s, ’90s and early 2000s, including “The Facts of Life,” “The O.C.,” “Party of Five” and “Melrose Place.”

You know how the plot goes by now: A terrified young woman decides to have an abortion but at the very last minute — as if by miracle — she opts for “keepin’ the baby,” to paraphrase Madonna’s 1986 hit.

After having unprotected sex with her boyfriend Jesse (Mark Damon), Andrea (Gabrielle Carteris), the way-too-old-for-undergrad braniac of “Beverly Hills 90210,” struggles with telling him that she’s pregnant. She knows she’s too young to have a child, but Jesse is Catholic and won’t approve. Andrea decides to have an abortion over his objections, saying the pregnancy was a mistake and should not ruin their lives. “It’s not a mistake,” Jesse insists. “It’s a baby.” He informs Andrea that if she goes through with the abortion, it’s over.

This crisis is solved when Andrea faints at the abortion clinic and reneges after she regains consciousness. Jesse, moved by her change of heart, proposes to her.

That exact same plotline has played out again and again. Ruby (Amy Smart), the short-lived girlfriend of Noel (Scott Foley), opts to terminate an unexpected pregnancy in the second season of “Felicity.” Moments after making the decision, though, she flees the abortion clinic while sobbing. “I can’t do it,” Ruby wails. “I’m sorry!” A sonogram later reveals that it's not Noel’s child but instead the product of a one-night stand.

The problem is not that television depicts young women becoming mothers. It’s that abortion is portrayed as so shameful that no woman could possibly go through with it, even though more than a million have an abortion each year. Statistics show that while many women may have initial reservations about the procedure, few will regret it. A 2015 study by University of California, San Francisco’s School of Medicine found that 96 percent of the women surveyed who opted to have an abortion said they did not regret their decision.

Television, it seems, is finally catching up to that reality. Researchers from University of California examined 40 television shows that aired from 2005 to 2014 and found that abortion providers were largely portrayed in a positive or nonjudgmental light — with the process depicted as safe and efficient.

While characters going through with an abortion was at one time rare, it’s becoming increasingly common: Remember the Abortion Episode, a media watchdog site on Tumblr, has reported that there were 12 abortions on TV from 2010 to 2015. Recent examples of shows that have dealt with the issue head-on include “The Good Wife,” “Scandal,” “Jessica Jones,” “Parenthood” and “Girls,” the latter of which have had two characters considering having an abortion. (One does so.)

Another show that’s leading the pack is “Crazy Ex-Girlfriend,” the acclaimed CW musical-comedy. Paula (Donna Lynne Champlin), the best friend of Rebecca Bunch (Rachel Bloom) chooses law school over having yet another child. She’s in her 40s and this is supposed to be her time. Refreshingly, it’s not Paula’s abortion that’s the big deal but the fact that she didn’t tell Rebecca, a sign that the two women aren’t as close as they once were. The pregnancy itself is considered secondary to telling the story of two best friends struggling to adapt to changes in their lives — and how those developments may drive them apart.

“Gilmore Girls” also uses Rory’s possible abortion — which, to be clear, is not directly addressed in the finale — to tell a greater story about women’s relationships. The show recognizes that the mother and daughter may make different choices about reproductive health, just as they may choose different paths. What worked for Lorelai may not be a good fit for Rory.

This point is underscored throughout the series. Lorelai, after running away from home to start a new life in Stars Hollow, has hoped to distance her daughter from the stuffy upbringing forced on her by her 1 percenter parents. Because Lorelai hated the debutante life, she assumes her daughter will also reject high society. To her surprise, Rory embraces it, having her own cotillion in the show’s second season. This isn’t presented as Rory’s problem but Lorelai’s. It forces the elder Gilmore to come to terms with the fact that her daughter will forge her own way in the world, even if it means going against everything her mother wanted for her.

Should “Gilmore Girls” continue nine years from now, it’s likely that Rory Gilmore would have her own precocious elementary schooler. But if she doesn’t, television will finally be recognizing that this is Rory’s decision to make.