Trump turns his back on Reagan: Our new president represents a confused backlash against capitalism 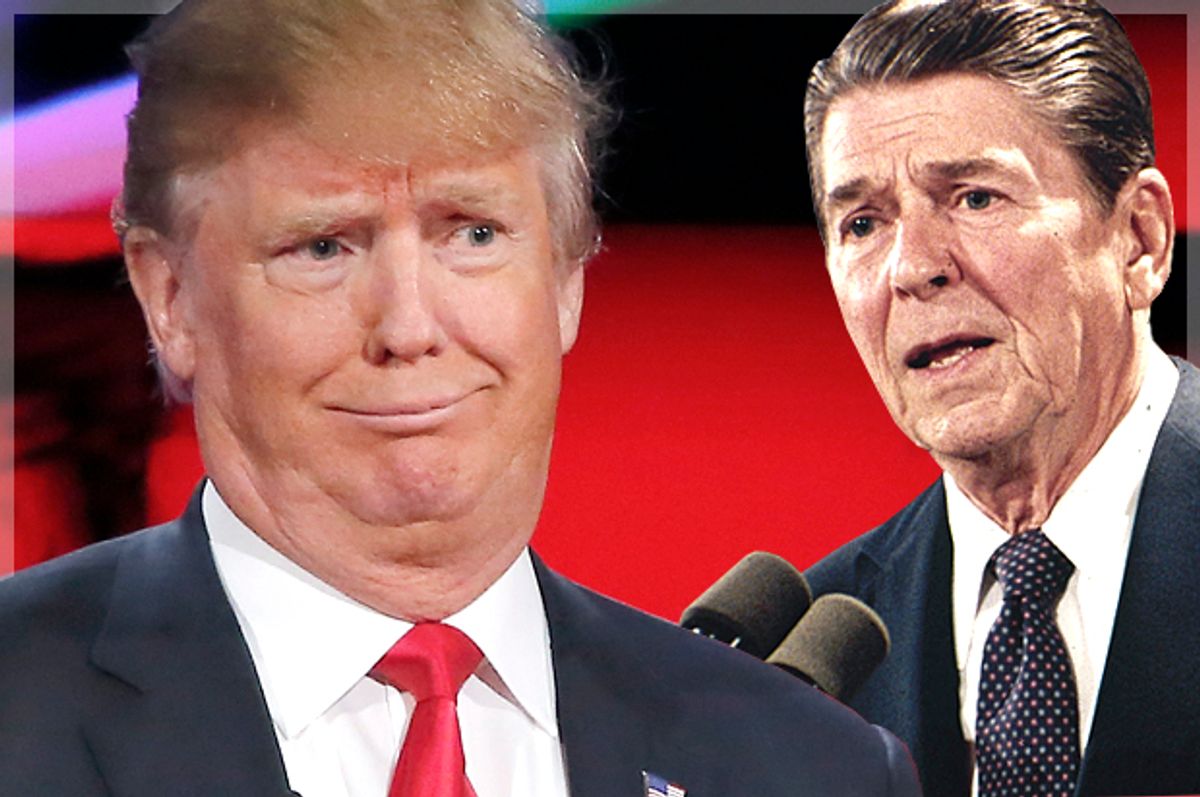 When Donald Trump struck a “deal” last week with domestic appliances company Carrier to save fewer than half of the 2,100 Indiana factory jobs it had planned to ship to Mexico, the same Republicans who regularly denounced President Barack Obama as a socialist over the years for even questioning the righteousness of the free market immediately began praising the president-elect for intervening with the free market.

“I don’t know the details of this, but I think it’s pretty darn good people are keeping their jobs in Indiana instead of going to Mexico,” said a gleeful House Speaker Paul Ryan, who had blasted Obama earlier this year for using the tax code to pick “winners and losers,” as Trump and Vice President-elect Mike Pence (who is still the governor of Indiana) did with Carrier.

In an interview with The New York Times shortly after the deal's announcement, Pence made a statement that would have been unheard of coming from a Republican before the election of Trump: “The free market has been sorting it out and America’s been losing.”

Not surprisingly, Trump concurred with his veep: “Every time, every time.”

Trump’s economic nationalism is more of a mentality than an ideology. And thus it is often contradictory and irrational from a strictly ideological perspective. At its heart, however, this mentality (and the movement it has inspired) can be described as a deeply confused and destructive backlash against the forces of capitalism.

This is not to say that “Trumpism” is anti-capitalist, of course. The movement’s leader is, after all, a shameless billionaire, and the Republican Party’s privatization-and-deregulation agenda is one that Ayn Rand and John Galt could get behind. (It will be interesting to see how much the privatization-obsessed House Speaker Paul Ryan manages to extract from the “populist” Trump.) When you begin to decode some of the populist rhetoric that Trump has spewed over the past 18 months, however, and look beyond the shores of North America, it's hard to not recognize what we are currently experiencing as a widespread revolt against global capitalism.

Around the developed world — from the ghost towns in the Rust Belt to the violent and chaotic streets of Athens and the unruly halls of the Italian Senate in Rome — radical or extreme politics have flourished on both sides of the spectrum over the past decade, particularly since the financial crisis. It goes without saying that the values and solutions promoted by left and right populists are antithetical to each other, and the populist right’s scapegoating of the most vulnerable members of society (minorities, immigrants, foreigners, the LGBT community, Jews, activists, intellectuals)  is rooted in old-fashioned bigotry and chauvinism.

But the modern populist right isn’t just taken wtih a racist and sexist backlash against diversity and feminism, as many on the left would like to think. This is evinced by the populist right’s almost fanatical obsession with the “globalists.” If you listen to a Trump speech or read articles on the website Breitbart News that Bannon has led, there’s a good chance you’ll hear or read about the globalists and their sinister ideology, globalism. This vague term is thrown around by the populist right about as frequently as the populist left blasts Wall Street and the 1 percent.

So what exactly is globalism? Trump’s spokeswomen, Hope Hicks, provided a definition shortly before the election:

An economic and political ideology which puts allegiance to international institutions ahead of the nation-state; seeks the unrestricted movement of goods, labor and people across borders; and rejects the principle that the citizens of a country are entitled to preference for jobs and other economic considerations as a virtue of their citizenship.

Does this ideology sound familiar? What Hicks, Trump and Bannon call globalism others call free-market capitalism. Who they call globalists others call capitalists, plutocrats, neoliberals and so on. What Trump sees as a globalist conspiracy to steal American jobs and destroy our proud culture, others see as capitalism doing exactly what capitalism has always done.

Consider the elimination of middle-class manufacturing jobs across industrial America — like those at the Carrier plant in Indiana. Over the past half century the manufacturing sector’s share of all domestic employment in America has steadily declined from a peak of about 30 percent in the 1950s to less than 10 percent in 2013, as the economy has expanded globally and the means of production have been transformed by automation technologies. History’s most famous critic of capitalism, Karl Marx — who was always quick to praise the economic system for its dynamism and progressive nature — could have predicted what has happened in our interconnected capitalist world over the past several decades.

“The bourgeoisie cannot exist without constantly revolutionizing the instruments of production, and thereby the relations of production, and with them the whole relations of society,” wrote Marx, with his co-author Friedrich Engels, in 1848’s “The Communist Manifesto.” “The need of a constantly expanding market for its products,” they continued, “chases the bourgeoisie over the entire surface of the globe. It must nestle everywhere, settle everywhere, establish connexions everywhere.”

The relentless expansion of the market — and thus the globalization of our world — is an inherent feature of capitalism. Ironically, what many conservatives and Trumpists perceive as the decay of our culture is also largely a product of capitalism and the invisible hand. As Thomas Frank observed in his 2004 book, “What’s The Matter With Kansas?”:

The truth is that the culture that surrounds us — and that persistently triggers new explosions of backlash outrage — is largely the product of business rationality. It is made by writers and actors, who answer to editors and directors and producers, who answer to senior presidents and chief executive officers, who answer to Wall Street bankers, who demand profits above all else.

Vice President-elect Pence found this out the hard way after he signed “religious freedom” legislation in Indiana that allowed businesses to discriminate against LGBT people, which prompted a massive backlash from the national business community as well as the NCAA, which then forced the governor to sign a revised bill.

As with globalization, “creative destruction” — defined by economist Joseph Schumpeter as a “process of industrial mutation that incessantly revolutionizes the economic structure from within, incessantly destroying the old one, incessantly creating a new one” — is a process inherent to capitalism. And it is creative destruction — that is, technology — not outsourcing that has eliminated the majority of manufacturing jobs in America over the past several decades. In other words, they’re not coming back, no matter what kind of “deals” President Trump will make.

The era of neoliberalism began in the late 1970s as a kind of counterrevolution against the social democracies that had emerged in the West during the 20th century. This counterrevolution was launched by American (and global) business leaders and multinational corporations to push back against labor and other activist groups standing in the way of capital -- environmentalists, consumer advocates, etc.

But neoliberals forgot why the welfare state was developed in the first place: to save capitalism from itself. Now after 40 years of dismantling many of the gains made during the 20th century, capitalism has returned to all of its old glory: Income and wealth inequality have risen to levels last seen shortly before the Great Depression, labor unions have been decimated (and thus wages have stagnated and worker rights have eroded), and democracy has largely been subverted by representatives of the capitalist class — or, as FDR once called them, the “economic royalists.”

Now the capitalist world is once again in crisis. As in Roosevelt’s day, populist and radical movements are emerging, demagogues are playing to the fears and hardships of an increasingly receptive public and the global order is moving ever closer to collapse. The forces of capitalism are leading the world toward catastrophe — and time is running out: If the global rise of neofascism doesn't do us in, climate change certainly will. The populist right will accelerate this trend; only a resurgent populist left can offer a real alternative to both Trumpism and neoliberalism.